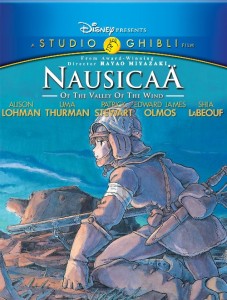 This post is the second entry in my Religion in Pop Culture Series. Each week I will be looking at the representation and interpretation of religion in literature, film, television, and video games. Spoilers will abound. You can read the introductory post here.

Hayao Miyazaki’s 1984 animated film, Nausicaä of the Valley of the Wind, begins with a series of mural images depicting the fall of industrial civilization, a cataclysm called the Seven Days of Fire. In the painted scenes, airships fly above a city, scientists create humanoid giants, and one of these completed “god warriors” breaths fire down upon towering buildings. The flames consume everyone and everything they made. As the camera pans across the final mural, we see monstrous insects flying triumphantly above ruins, a toxic jungle spreading its deadly spores, and people falling into sickness and death. The few who remain standing face east, their arms outstretched toward an angel clad in blue who flies toward them, bringing hope.

Centuries have passed, but like other descendants of those who survived the apocalyptic fires and the jungle toxins that ensued, the people of the Valley of the Wind know these stories and the prophecy they contain: “After a thousand years of darkness, he will come, clad in blue and surrounded by fields of gold to restore mankind’s connection with the Earth that was destroyed. And he will guide the people of this planet at last to a land of purity.”

Unlike most others, the people in this valley know a rare peace. They’ve so far avoided the wars that plague neighboring kingdoms, and wind from the sea keeps their air relatively pure. Still, the poisons of the jungle have taken their toll. Their leader, King Jihl, is ill and bedridden, and his daughter Nausicaä has had to take over many of his responsibilities. Others known to travel are sick as well, and the Toxic Jungle grows closer every day. Many kingdoms have already been consumed by it. Time is not on humanity’s side. Even the Valley of the Wind will one day be swallowed up.

The film’s story begins with Lord Yupa, a wise traveler and master swordsman, returning to the valley after a year away. He’s almost killed in the jungle by an Ohmu, a gargantuan insect protector of the forest, but Nausicaä, hearing the pursuit while collecting spores in the jungle, comes to Yupa’s rescue, calming the creature and leading it back to its home. With flash grenades and a simple insect charm, the young princess brings the monster out of its rage. It’s many eyes, each as large as a person, turn from red, signifying its murderous rage, back to their normal blue. The Ohmu follows her obediently. Yupa is astonished and wonders at Nausicaä’s strange power.

For much of his life Yupa has searched for answers and for a possible cure to the jungle’s toxins, but he has no good news to proclaim to the king when the two men and Nausicaä meet that night. Jihl asks him to stay and settle in the valley, but Yupa says he must continue on. He has to know if “mankind is truly fated to be swallowed up” by the Toxic Jungle or whether there is still some hope they might survive. Yupa doesn’t believe in the prophecy, even though Obaba, the blind prophetic woman who tends to the king, tells him he destined to find the man in blue. To Yupa, the prophecy is just a myth, a false hope, and takes Obaba’s promise as her just teasing him.

However, Obaba’s words to Lord Yupa capture the interest of Nausicaä, and she looks with renewed wonder at the figure of the man in blue depicted on a tapestry behind the king’s bed. As presented on the tapestry, the man is colored mostly in gold, including his skin, his beard, his staff and a bird that rests on his shoulder. The only blue in the picture is in the eyes of the bird and the band around the man’s head. These discrepancies with the words of the prophecy don’t seem to matter to Obaba. She believes, religiously.

If Obaba could see, she might have noticed an eerie similarity between the man on the tapestry and Nausicaä sitting with Yupa, the king, and her around the fire. Not only is the princess dressed in blue, she also has an animal on her shoulder. It’s not a bird, like in the tapestry, but a fox-squirrel named Teto given to her by Yupa. Nausicaä, you may have guessed, is the prophesied hero, but Obaba doesn’t realized the truth until the end of the story when the true meaning of the prophecy becomes clear.

Prophecy stories can be rather humdrum and contrived, but Miyazaki avoided the pitfalls of the genre by taking its hermeneutics seriously. He used elements of the formula, including having the hero do what the prophecy foreshadowed and making ambiguous signs of the prophecy become clear as the narrative unfolds, but he also complicated the prophecy by weaving inconsistencies into its history, its interpretation, and its fulfillment. The words of the prophecy seemingly contradict its artistic representation on the tapestry and on the murals seen with the opening credits, and Nausicaä’s realization doesn’t perfectly correspond to every prophesied detail. Or, rather, the correspondence is sometimes literal, sometimes figurative, and sometimes both.

Through her joyous love of all life, wise leadership, self-sacrifice, patience, careful scientific research, and magical ability to commune with nature, Nausicaä restores harmony between the human race and the Earth, but she’s obviously not a man, bearded or clean-shaven. Nor is she an angel. The figure in blue is a woman who spends a lot of her time in the air, piloting a glider with miraculous skill. And while she wears a blue outfit through much of the story, it’s not this outfit that marks her as the prophesied savior. Her clothing becomes blue because of what she does.

Nausicaä saves an injured baby Ohmu from enemy soldiers who had tortured the poor thing close to death and used it to lure a rampaging herd of the giant, destructive creatures into the Valley of the Wind. As she struggles to prevent the enraged baby from crawling into an acid lake, Nausicaä’s red clothes are turned blue as the blue blood of the innocent Ohmu washes over her. Nausicaä is bleeding heavily herself, having just been shot twice by one of the soldiers transporting the baby Ohmu. Undeterred, she forces the soldiers to carry her and the now calmed Ohmu to a spot in the path of the running herd, hoping the the thousands of Ohmu will see the baby alive with her, become calm, and not overrun her kingdom. The creatures finally stop, their eyes returning from red to blue, but only after Nausicaä is thrown into the air, seemingly killed in their mindless charge. Led by the baby Ohmu, the herd encircles her. With their golden tentacles, they heal her wounds and raise her high into the air, and the people of the valley see their prophesied savior, full of life and laughter, clad in blue and surrounded by fields of gold.

It’s a glorious image of restoration and harmony, made all the more powerful because Nausicaä too knows murderous fury. Earlier in the movie, Nausicaä had witnessed the murder of her father at the hands of the Tolmekians, an invading force who’d come to the valley in search of a lost god warrior. At the sight of her father dragged from his bed onto the floor, Nausicaä screamed and attacked the enemy troops in the room. Well outnumbered and armed with only a rod and her rage, she shattered blades and bones, killing most of the soldiers before Yupa entered the royal chamber and leaped between Nausicaä and newly arrived knights, putting a stop to the violence. Suddenly conscious of the lives she’d taken, Nausicaä vowed to herself never again to kill and to do everything in her power to save lives, human or insect, friend or foe. This task becomes her driving force and purpose throughout the rest of the story, no matter the risk to herself. 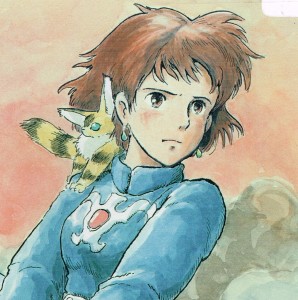 sicaä achieves her victory over death and disharmony can the prophecy be properly interpreted. Until it’s fulfilled, the images remain ambiguous, their meaning uncertain. No one foresaw that the man in blue would be a woman washed in the blood of the innocent, or that her powers of flight would not be angelic wings, but her graceful skill at flying a mechanical glider. No one imagined imagined that the Toxic Jungle was actually purifying the land, not until Nausicaä discovered this by growing plants from the jungle in a purified environment. While other kingdoms sought the powers of destruction to bring an end to the destruction, Nausicaä flew against the conventional thinking, choosing to put her faith in the powers of science and solidarity.

In one sense, explicit religious content in Nausicaä of the Valley of the Wind is minimal. Nausicaä asks God to protect her people as she races to stop the raging Ohmu, but that’s about the only invocation of the divine. In another sense, however, this world is deeply religious. The people live in fear of obliteration, but hold on to a sacred hope. For some, like Yupa, the old stories are as much legend as they are fact. They expect no miracle, but they haven’t despaired. Others, like Obaba, know in their hearts that the time of restoration is upon them, and they long for their angel. If Nausicaä believes herself to be the prophesied hero, she doesn’t say. Like Yupa, she’s interested in the mysteries of the Earth and keeping her people safe, but like Obaba, she’s fascinated by the old myths and symbols. She doesn’t have the time to ponder their significance, however; she’s too busy giving them meaning and importance. At the film’s end, she rejoices, not because old tales now make new sense, but because her people are safe, she’s made peace with the Ohmu, and they all now have a way forward to the promised land of purity. 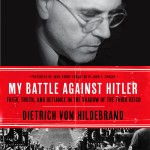