This past week, we celebrated the 48th annual World Communications Day with a look again at the beautiful message of Pope Francis, which reads in part:

The Church needs to be concerned for, and present in, the world of communication, in order to dialogue with people today and to help them encounter Christ.  She needs to be a Church at the side of others, capable of accompanying everyone along the way.  The revolution taking place in communications media and in information technologies represents a great and thrilling challenge; may we respond to that challenge with fresh energy and imagination as we seek to share with others the beauty of God.

When I read this week’s Sweet Tweets, so faithfully compiled each week by my friend John Clem, I again see an underscoring of this mission orientation of our efforts to use the tools of modern technology to share the truth of the Gospel. From teachers in classrooms mentoring their students to a beautiful nun winning a singing competition, the Church is full of folks walking at the side of others. It’s tempting at times to cloister ourselves in our corners, away from some of the nastiness that goes on in the “real world”. But when we do this, we miss the opportunity to encounter those perhaps most in need of Christ in their lives. And we also miss our chance to see the beauty of what they can teach us.

This week, let’s seek true encounter in all its forms, reminding ourselves that the beauty we have to share is worth all of the energy and imagination we can muster!

John Clem is the Director and Media Minister at Catholic Web Services (http://catholicws.com/). John is currently in formation to join the Secular Franciscan Order, and loves to share his talents in faith, technology, and journalism in service to the church.  John also writes a blog entitled Call To Holiness  (http://www.calltoholiness.us/). Follow John on Twitter at @Catholicwebs, on Facebook and at Google+.

June 5, 2014
US Department of State Expresses Concern Over Ongoing Detentions and Arrests in Rwanda
Next Post

June 10, 2014 Revealed Secret Cables Point to US Reluctance at Onset of Genocide
Recent Comments
0 | Leave a Comment
Browse Our Archives
get the latest from
Catholic
Sign up for our newsletter
POPULAR AT PATHEOS Catholic
1 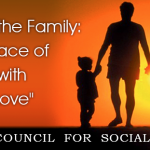