Valentine’s Day Special: Are These the Top 25 Films About Marriage?

Valentine’s Day Special: Are These the Top 25 Films About Marriage? February 14, 2013 Jeffrey Overstreet 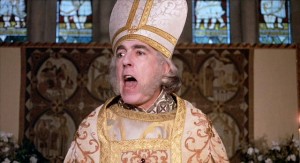 Will you be celebrating Valentine’s Day at the movies? If so, what will you watch? Perhaps you’ll watch something romantic. Or, if you’re like me and Anne, you’ll just watch what sounds good. (I think she may be interested in checking out Skyfall, now that it’s available online; or maybe an old favorite that involves both fantasy and true love, like Ladyhawke or The Princess Bride.)

Still, the world needs such a list. What are the great movies about marriage? Which is your favorite? I’m not talking about movies that have elaborate weddings, necessarily. I’m talking about films that help us imagine, experience, and understand the glories and the terrors of marriage, the highs and lows, the risks and rewards.

When I think of great big-screen testaments to the challenges of lasting love, three films jump immediately to mind. And they’re on my mind today as I peruse a new list of “The Top 25 Films About Marriage” from the Arts and Faith community, which is hosted by Image. (Read Michael Leary’s introduction to the list here.) 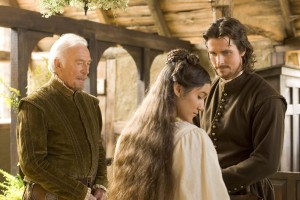 One is a film I first saw in 2006, and it remains vivid in my memory. It wouldn’t be a stretch to say I think about it every day.

If you’ve followed this blog for a few years, you may have grown tired of my enthusiasm for Terrence Malick’s The New World. Deal with it. The New World is a remarkable love story in how it breaks the mold, how it casts off the burden of typical American romance stories and lunges in a bright new direction.

The movie spends most of its running time drawing us into a sensual, flirtatious, seemingly innocent romance between a New World pioneer, John Smith, and a young woman called “Rebecca” from that New World. We watch the playfulness, the curiosity, the affection, the admiration. But then we watch Smith’s interests turn to something more self-interested: the ambition to make a name for himself as an explorer. And we see that Rebecca’s affection for him is something close to idolatry. 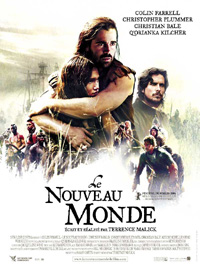 Then the movie takes an unexpected turn: While we’re waiting for Smith to realize his mistake, or for Rebecca to pursue him, another man appears. This is John Rolfe. He’s a quiet man with reasonable ambitions. He’s a tobacco farmer (not the kind of character typically glorified in American romance stories.) And he comes to love Rebecca whole-heartedly. Instead of stealing away into the shadows for adventures in bare-skinned bliss, he has designs to marry her in a church wedding, remain faithful to her, and raise children with her. It may not have the rebellious spark of the first story, but it is a rebellious story nevertheless, one that dares to break with Hollywood convention and suggest that the greatest adventure — the boldest, bravest, most glorious — is one rooted in tradition, in community, in fidelity.

When we see John Smith the Ambitious again, we can only feel sorry for him. He missed his chance at finding a home in the best of all possible New Worlds.

You can find my original reviews of the film here. 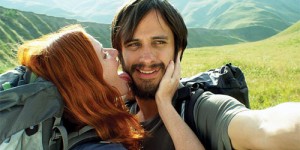 The second film is a new one. The Loneliest Planet, currently available on Netflix Instant, follows a young couple who are engaged to be married.

They’ve covered a lot of ground together, hiking in countries all over the world. They like to go off the beaten track to get a more intimate sense of the places they’re exploring. They don’t want to be just tourists. But there’s a problem with going off-road into the wilderness—you might just see what the world is really like. Similarly, if you’re brave enough to go exploring in love, you’ll probably eventually come face to face with truths about each other that are deeply unsettling, and truths about yourselves that are humiliating.

Both Nica and Alex learn things about themselves and each other along the way that threaten to turn them around and send them back to where they came from. They learn that they are fearful, they are capable of being tempted, and that they may not always faithfully leap to one another’s aid in a crisis.

My full review of The Loneliest Planet is here. 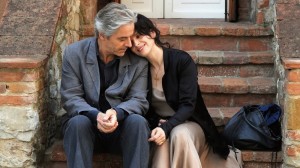 The third film is Certified Copy, by Abbas Kiarostami, my favorite film since… well… The New World in 2006. Here’s my review of that one.

All three films have passages that are hard to watch. They all have scenes of remarkable intimacy. And proceed with caution if you watch The New World and The Loneliest Planet (especially the latter) if scenes of sexual intimacy trouble or distract you. But I would love to host screening and discussions for couples at any stage in their relationships.

Still, of these films, I was surprised that only one of them ended up on the Arts and Faith Top 25 Films About Marriage.

No problem: A community of more than 40 film enthusiasts, all part of the Arts & Faith community hosted by Image, voted on this. I was only one voter. And I’m dazzled, impressed, and in some ways perplexed by the list this group has created.

There are a lot of titles here I haven’t yet seen, so I’m updating my Netflix queue. If you’ve seen even half of them, well… congratulations, you are a rare and accomplished cinephile!

It suggests that people have very different ideas about what kinds of movies make them think about marriage. Some think about a descent into psychological turmoil, grief, and struggle (Don’t Look Now). Some think about stories of strife and disintegration (A Separation). Some think about clashes between generations in what it means to be “a family” (Tokyo Story, Make Way for Tomorrow, both of which rate highly among my own favorites). I’m pleased to see In America on the list, a beautiful portrait of a marriage and a family trying to cope with unemployment, poverty, a dangerous neighborhood, and a dream of a future as Americans. Another Year shows us what can happen when a couple create a safe place and a sense of family for the broken and the botched. Tuesday, After Christmas is a devastating portrait of how the frivolous thrills of infidelity and break apart true intimacy. There’s even a sci-fi thriller I’ve never heard about before: The Face of Another.

It also suggests that the Arts and Faith community has rarely seen a vision of blissful romance that has impressed us much. You won’t find any Jane Austen stories here. What few “happy endings” you’ll find here are hard-won, as likely to leave you shaken by troubles as inspired by ideals. This is a community that has few illusions about the challenges and dangers and hardships involved in making a strong marriage. And we won’t suffer foolishness or sentimentality. We  won’t accept scenes of couples making out in the rain, or climactic moments in which a man runs down city streets during rush hour, trying to catch up with his departing beloved and clear up a misunderstanding. We’re holding out for something inspiring in its authenticity and imagination.

Our list affirms an ideal worth striving for by pointing to what happens when we fall short of that ideal. I think we’d love to celebrate movies that show us an exemplary marriage, one that inspires us to follow that example. But really… how many movies would qualify for a list like that?

As I look back on almost seventeen years of marriage, I can testify without any reservation that marriage is an experience worth all manner of striving and sacrifice. But it is also a call to extreme vulnerability. It asks you to do nothing less than risk your whole heart. It will be a test to all you believe. It will reveal what kind of person you are. And yes, in spite of all of that… even because of all of that… it brings vivid pleasures, unexpected blessings, and a kind of meaningfulness that can be enjoyed no other way. I doubt you’ll ever see a work of art that does them justice.

If I could add any titles to this list, I would add The New World and The Loneliest Planet, yes. I’d also hope to see something animated make the cut. (The Incredibles comes to mind.) But above all, I’d go looking for a film that bears vivid witness to the joys of marriage, bringing them to mind in some way other than to demonstrate the lack of them. I suspect it would be a long and difficult search.

Are the great joys of marriage just too grand, too sublime, too mysterious to illustrate on the big screen? 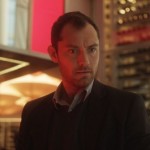 February 18, 2013 How "Downton Abbey" Should End
Recent Comments
9 Comments | Leave a Comment
Browse Our Archives
get the latest from
Entertainment
Sign up for our newsletter
POPULAR AT PATHEOS Entertainment
1

9 responses to “Valentine’s Day Special: Are These the Top 25 Films About Marriage?”