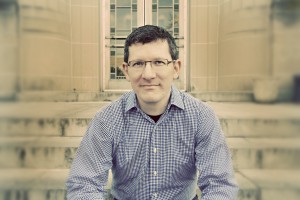 When Gregory Wolfe introduced Andy Crouch, the keynote speaker at the Glen Workshop in Santa Fe, New Mexico, a few years ago, I was among many applauding with enthusiasm.

Andy’s book Culture Making — which won Christianity Today’s 2009 Book Award for Christianity and Culture, and was honored as one of the best books of 2008 by Publishers Weekly, Relevant, Outreach and Leadership — had made a strong impression on me. In it, he exhorted believers to reconsider their manner of cultural engagement: Rather than react, withdraw, or merely criticize, we should create. For who should have a fuller understanding or appreciation of creativity than those who believe that all good things have been created?

So what happened next was both surprising and exactly right: We watched Andy walk to the front, shake Gregory Wolfe’s hand at the podium, and then — much to our surprise — he left the podium. He went to the piano. And he proceeded to perform a whole-hearted gospel number, delighting us with the revelation that we didn’t just have a writer, an editor, and a theologian in our midst, but also a classically trained musician. (Andy has led musical worship for congregations of 5 to 20,000.)

He wouldn’t just talk about creativity… he would demonstrate it. 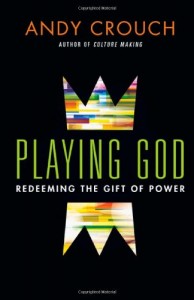 In addition to writing and speaking, Andy serves the needy and oppressed with his work on the governing boards of Fuller Theological Seminary and Equitas Group. He is also a senior fellow of the International Justice Mission’s IJM Institute. His writing has appeared in Time, The Wall Street Journal, and several editions of Best Christian Writing and Best Spiritual Writing. He lives with his family in Swarthmore, Pennsylvania.

What is more, Andy had recently become the executive editor of Christianity Today, and good things have been happening as a result. During a time when many magazines are vanishing, he has helped revitalize CT‘s endeavors. There’s a different kind of spirit in his work — a joy, a keen eye for voices and visions that need to be raised up for occasions of influence, and a keen ear for questions that need to be explored by writers and readers.

Recently, Andy was the keynote speaker at Seattle Pacific University’s Day of Common Learning. SPU President Daniel Martin, Provost Jeff Van Duzer, and Dr. Margaret Diddams had invited him to share ideas from his remarkable new book, Playing God: Redeeming the Gift of Power. (If I could, I’d personally gift a copy to every pastor and church leader I know. The ideas in this book could be revolutionary for the church, but they would need to be read and discussed. In hopes of bringing it to the attention of a new audience, I’m writing about it for an upcoming issue of Response.)

In that presentation, Andy played the piano again, but in a different way, for a different purpose: He played a piece by Bach in order to illustrate the purposeful tensions between order and chaos, harmony and dissonance. He also presented a beautiful work of art and led us in some art interpretation. It was an excellent lecture. I so wish I could share it with you here, but — alas! — it does not appear to be available online. So I’ll share this with you instead, in which he covers some of the same ground…

Bookmark that video and save it for later.

Because right now, I have the privilege of welcoming Andy Crouch “to the stage” again.

In case you’ve missed them, the previous playlist DJs this month have been

… and there are more to come.

Okay, Andy… it’s your turn to play DJ for us through some of your favorite Christmas music. Thanks for joining us!

Before we get to Christmas we do well to absorb the lessons, and the often neglected music, of Advent. I don’t know that many Advents in my life have felt more tense and torn than this one, with wounds of injustice freshly opened by recent events in the United States, along with countless global reminders of how far we are from the reign of the Prince of Peace.

Alex Mejias is a  Charlottesville, Virginia, based worship songwriter whose High Street Hymns project has contributed some fine, fresh acoustic rock settings of the great hymn texts of the Christian tradition. (I’ll be using his simple setting of the ancient text “Creator of the Stars of Night” at our church on Sunday.) But his recent collaborations with the hip hop artist Rashad Lowery, who performs as Shad E, have taken High Street Hymns’ work to a new level. On this track, Shad E’s lament covers urban realities, global conflict, personal responsibility, and systemic sin, all embedded in expectation and hope. It’s raw and urgent, just as Advent should be.

“But Who May Abide the Day of His Coming,” peformed by Patti Austin, and “He Shall Purify,” performed by Tramaine Hawkins, from Handel’s Messiah: A Soulful Celebration

When Quincy Jones turned his prodigious producing talents loose on Handel’s Messiah with a host of top-shelf gospel and R&B artists in 1992, the results were . . . well, somewhat uneven. Let’s just say that Stevie Wonder did not cover himself in glory. And some of the soft-jazz settings haven’t aged so well. But these two consecutive tracks, which stick remarkably close to Handel’s music and libretto, infuse relentless gospel energy to these  prophetic texts.

“It Came Upon a Midnight Clear,” performed by Bruce Cockburn and Sam Phillips

With one simple change — shifting the mode of the tune from major to minor — Cockburn and Phillips turn this potentially treacly text by a 19th century Unitarian minister into a haunting prayer that perfectly straddles Advent and Christmas. When Sam Phillips comes in on the fourth verse with her modal harmony line, I defy you not to get goosebumps.

“I Will Find A Way,” by Jason Gray and Any Gullahorn

A remarkable community of artists in Nashville who call themselves The Rabbit Room aim to create “art that tells the truth beautifully.” If the only thing that had come out of that community was this song, written by Jason Gray and Andy Gullahorn, they would have succeeded.

Based on a short story by the writer Walter Wangerin, this is a stealth stunner of a song, on point and indirect in the way the best art can be. And while it is not about Christmas — is it? — Christmas is what it is all about.

but then comes one of the gentlest surprises in all of devotional poetry. What is this “great mystery” and “marvelous sacrament”?

“that animals should see the newborn Lord lying in a manger.” That little word “animalia,” so unexpected, captures exactly the homeliness and humility in Luke’s Christmas story. And as you meditate on this text, you begin to see with the medieval imagination that indeed, it is the animals, gazing benignly on the little baby as they munch their hay, that make the Incarnation such a great wonder.

The text has been set by countless composers (most famously Victoria), but Morton Lauridsen’s setting surpasses them all for me in its supple dissonances and reverent stillness. If I can have only one song for Christmas Eve, this is it.

“It’s Cold Outside,” peformed by Jill Phillips and Andy Gullahorn

This is emphatically not a Christmas song — it’s for the pagan festivities that follow. Is there any song that captures the sleazy unsteadiness of “the holidays” better than “Baby, It’s Cold Outside”? A masterwork of manipulation or persuasion, depending on your point of view, it has the boozy hangover of an era where “no” definitely did not mean “no.”

But Jill Phillips and Andy Gullahorn have taken this most dubious tune and turned it inside out, rather literally, to hilarious effect. And suddenly it’s a song about about clueless husbands, marriage, conflict, and — in the most sly and wonderful way — commitment, from a couple who have lived it all. Cheers. 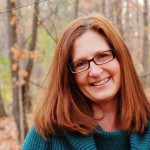 December 21, 2014 Poet Tania Runyan Presents a Christmas Playlist
Recent Comments
1 Comment | Leave a Comment
Browse Our Archives
get the latest from
Entertainment
Sign up for our newsletter
POPULAR AT PATHEOS Entertainment
1

God will bless you
Review of "Divine Blessing and the Fulness of life in the Presence...
view all Entertainment blogs
What Are Your Thoughts?leave a comment