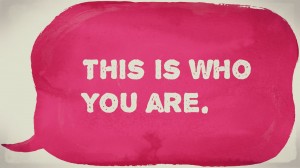 Earlier this week, I was emailing with my dad and he told me about how this last name that we share, Bilbrey, has made for some comical moments among strangers. It turned into quite the anecdote. Here’s what he wrote:

In my former career in international trade, I traveled a good deal. I recall once, upon checking into a hotel in New York City with my colleague, I was asked by the clerk, “Do you prefer Bill or William?”

Somewhat surprised by her question, I responded,“Do I prefer Bill or William who?”

“Mr. Brey, shall we call you Bill or William?”

“I’d prefer you call me Dan, since that is my name.” It was now her turn to be surprised and slightly embarrassed.

I relate this comical incident years later, as it makes this point: identities are our unique possession. We share our identity with no one else.

Consider how inappropriate it would be, upon introducing yourself to someone for the first time, if your new acquaintance should say to you, “But you don’t look like a Dan. I’m going to call you Bill.” Or, “Let me tell you how properly to say your last name, because you are mispronouncing it.” Or, “Have you considered that you may be misspelling your name, because it sure sounds different than you spell it.”

There’s nothing quite as audacious as a stranger or mere acquaintance claiming to know more about you than you yourself.

Who in this life knows you better than you know yourself? Maybe a best friend? A parent? A significant other? It’s generally only one or two trusted individuals who occupy that sacred place in your life, if anyone at all, right?

It takes years to build this kind of relationship, the kind where you can hear and take to heart statements like, “I think those are just your insecurities talking.” Or, “You’re lying to yourself about this.” Or, “This has always been a blind spot of yours.”

It’s rare–and a total treasure–to have this kind of trusted voice in your life. But that’s not to say other people don’t try to inhabit that role every once in a while, particularly if your sexual orientation or gender identity puts you in the minority. Too often in our conversations surrounding faith, gender and sexuality, we hear statements that project one’s own limited understanding and experiences onto the other. Unlike the insight of an intimately acquainted friend, these unsolicited statements come from a place of one’s own beliefs about a given issue, not a knowledge of you as an individual.

This happens on many different spheres. Within some conservative Christian circles, any identity that falls outside the bounds of cisgender (identifying as the gender one was assigned at birth) male or female, or a heterosexual orientation, is unacceptable. An outsider to that rigid narrative of what it means to experience gender and sexuality often has their story retold in a way that distorts reality in order to fit within the narrative (e.g. “Your same-sex attraction is just like any other temptation,” or “You just haven’t met the right [opposite-sex love interest] yet.”)

But even in more progressive circles, certain stated identities are often called into question. I’ve heard more than one bisexual individual, for example, recount conversations with gay or lesbian friends in which they were told to “pick a side” or “fully come out already.” The same with individuals who don’t necessarily fit into a rigid gender binary of male or female.

When we fail to recognize an individual’s agency in being able to interpret their own experience and determine their own identity, we rob them of them of their humanity. We say that what exists within someone cannot or should not exist. In the most extreme cases, we suggest that God cannot accept a person as they are. That’s not only damaging and unloving, it’s flatly untrue. We should be convinced, as the Apostle Paul was, that nothing in all creation can separate us from the love of God in Christ. That includes the breadth of human experience, however foreign it appears to be to our own.

March 16, 2015 On Fidelity
Browse Our Archives
get the latest from
Evangelical
Sign up for our newsletter
POPULAR AT PATHEOS Evangelical
1

Evangelical
Great Infographic for Research Findings in Us Versus...
Love is an Orientation
TRENDING AT PATHEOS Evangelical