Casting the Pearls back to the Swine

It is a strange reality that Michael and Debi Pearls’ child training methods were driven into me so firmly as a child that I didn’t even think to question them when I left Christian Patriarchy behind. I still believed that children must be trained to obey their parents unquestioningly, that children should be spanked starting as young as six or nine months, and that if parents did not break their children’s wills those children would grow up to be miserable, spoiled brats. Therefore, when I gave birth to my daughter, a full two years after I first defied my parents, I fully intended to use the Pearls’ methods on her. When my daughter first became mobile, she was fascinated by the garden we had growing in pots on our coffee table. She would crawl over, pull herself to standing, and reach her fingers into the dirt. And so of course I did what I had been trained to do: I said “no” and slapped her hand every time she reached for it. I had been taught, after all, that children should be trained not to touch things you don’t want them touching, and that training starts early.

And then I realized something. I was punishing my daughter for exhibiting natural curiosity.
What the hell was I doing? Wasn’t curiosity something I should be fostering? What was I doing to my child?

I immediately got on the Internet and typed the words “Michael and Debi Pearl” into google. Was there something about them that I did not know? I quickly learned that, outside of Christian Patriarchy, the Pearls’ methods are universally condemned. I suddenly saw the Pearls’ methods for what they were: abuse.

But where did that leave me and my precious little daughter? How was I to train her? How could I be sure I wouldn’t ruin her? Having grown up as I did, spanking children was second nature. What was the alternative?

I began doing research on other child training methods, and soon learned about Attachment Parenting. I liked what I read. I decided that I would focus on forging a relationship with my daughter, on mutual understanding and respect, rather than on training her for blind obedience. At that moment, my entire approach toward my daughter changed. She was not an adversary to be defeated: she was a little girl to love and bond with.

In my home, I never say “no” without a really good reason. Is she getting into the trash can? What curious fourteen-month-old wouldn’t! So long as there is nothing dangerous in it, is there any reason she shouldn’t pull the trash out and throw it all over the floor? So it inconveniences me! Who cares! She wants to spill dry beans on the floor and move them around with her hands? Why not! She wants to color with chalk instead of going to bed? Why not! She wants to draw on the walls with markers? Why not!

My daughter and I are teammates, allies, friends. Sure, there are still rules – I’m the mom, after all, and she’s the little girl – but I listen to what she wants and we compromise. She can play with the dry beans on the floor, but she needs to help pick them up afterwards. She can color with chalk for five more minutes, but then it really is time for bed. And someday, when we move out of this apartment, she will help me repaint all the walls white. 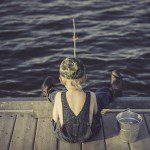