Men and Women in Christian Patriarchy: Masters and Slaves or Equals? 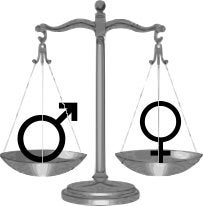 I recently came across an article by Debi Pearl that illustrates this perfectly. For those of you who don’t know, Debi Pearl wrote a horrible book called Created To Be His Helpmeet, and then a similar but equally destructive volume called Preparing To Be A Helpmeet, targeted to teenage girls. These books teach that wives are always to obey their husbands, period (okay, so she offers a few exceptions, such as if a husband is sexually abusing his children or if a husband tells his wife to watch porn with him). According to Debi, even questioning your husband’s decision in a matter is a no-no. My mother keeps her copy of Created To Be His Helpmeet by her Bible.

Almost at the very beginning of her article, “Learning To Become A Multi-Colored Girl,” Debi reveals that all the talk about men’s and women’s roles being equal is nothing but rhetorical flourish:

As Adam was created in God’s image, Eve was created in Adam’s image. God could have shaped two clay figures and breathed life into both, but he chose to take the woman from the man’s own flesh and bone. I have come to see that tiered process as very significant, making it consistent with nature that the woman should be the helper in the chain of command.

The whole premise of Debi’s article is that women must shape themselves to their man and his needs – and she makes it clear that this is a one way process.

God did not create women as he did men, strongly fixed in one type or another. Being created in the image of man, we are more muted and flexible in our types.

You see? Man is fixed and set. Woman is muted and flexible, waiting for a man about whom to shape herself. What? This is like saying that men have characters and personalities, but that women are born empty, like clay to be shaped at the whims of men. Which is, by the way, exactly what Debi says next:

The woman was called to be her man’s helper, to fashion herself to be what he needs her to be.

Somehow, I’m not seeing a lot of equality going on here… There is man, and then there is woman. Man is what really matters, and the woman lives only for the man. This is actually what Debi says outright in the introduction of her book – that woman was created solely for man, and that serving and helping him is her purpose in life. Debi continues:

When a girl marries a man she becomes a new person. She becomes his bride, his woman, his helper. It is God’s will that her life be fashioned to help him. If a girl comes into marriage knowing that she is equipped and appointed to be this one new person, then she can adapt and find fulfillment in her new self expression.

Again, man is fixed. Woman, in contrast, is but a possession of man. The woman’s own character and personality do not matter; all that matters is that she fashion her life to help her man. Is the man called on to fashion his life to help his wife? NO. Man was created for God, and woman was created for man. Woman matters not, except to serve man. Finally, Debi’s advice for young unmarried women:

Practice being flexible in your likes and dislikes, how you feel about things, and what you hope to accomplish. Start striving to shape your life to help others, and hide God’s Words in your heart concerning becoming a wife. Lastly, make a written committment to honor the man God provides for you.

In her article, Debi explains how she would have been a completely different woman if she had married a factory worker instead of her husband, or if she had married a minister, or an Amish man. Her goal is to show how flexible women have to be, shaping themselves around their husbands and their husbands’ needs. What Debi forgets is that her husband’s life would have been completely different if he had chosen to be a factory worker, or a minister, or to become Amish. This assumption that men are steady and know where they’re going and that women are fluid and simply fill in the margin’s of a man’s life is crap. Everyone makes choices in life, and those choices affect who they are and where their lives will go. For example, my life would be very different if I had chosen to study law instead of getting my Ph.D. in a humanities field, or if I had gotten my degree in library science. But this is true for both men and women. Men and women are equally steady and flexible, having some character traits that don’t change and others that evolve over time as life circumstances change. Debi doesn’t seem to realize this.

It’s not just me, though. This lie helps to keep women in the Christian Patriarchy movement, persuading them that they are not being treated as inferior, or being degraded or used. Indeed, they are convinced that their role as wife, mother, and homemaker is of equal worth and value to men’s role as protector and provider, and work to excel within their role, for which they gain praise and admiration from their companions. By some slight of the hand, Christian Patriarchy convinces women to willingly and eagerly be subservient slaves while seeing themselves at the same time as being of equal value to their masters. You have to give some credit to the Christian Patriarchy movement: such a feat is as mind-boggling and impressive as it is horrifying and tragic.

The standard defense of the idea that men’s and women’s roles are equal in spite of their differences that I have heard is that a man couldn’t make it without his wife. This meant, somehow, that men’s roles and women’s roles were of equal worth, both necessary in building the Kingdom of God. Well, I have news for you. The plantation owners in the antebellum South could never have “made it” without their slaves. That did not, however, mean that the slave owners and the slaves were “equal.” Rather, one side had all the power and the other all the drudgery.

September 5, 2011 My life as a daughter of Christian Patriarchy
Recent Comments
0 | Leave a Comment
Browse Our Archives
get the latest from
Nonreligious
Sign up for our newsletter
POPULAR AT PATHEOS Nonreligious
1

Nonreligious
What do evangelicals and Nazis have in common?
Love, Joy, Feminism
TRENDING AT PATHEOS Nonreligious