Tarot Cards and Me

I feel like this blog has been too serious lately. So, time for a more light-hearted topic!

Growing up, I was always afraid to look at tarot cards. Not that I came in contact with them much, of course, but I’d see them for sale at a local bookstore and stay far, far away. I’d read Frank Peretti and other authors talking about witchcraft and tarot cards and the like, and the demonic influence these things invited. In Peretti, the demons were real and physical, plaguing people and looking for anything they could find to invite themselves into people’s homes.

One of my parents’ friends spoke of confronting a physical demon in her house in the middle of the night, casting it out and concluding that it must have been invited in by her daughter’s rock music. So yes, I stayed far, far away from tarot cards. I did not want to invite any sort of demonic influence or possession!

Once I left my parents’ beliefs, I was still afraid of tarot cards. I knew it was irrational, but these thought patterns can be hard to kick. At the same time, I was fascinated by tarot cards, curious about these things my parents and others like them considered so evil. Finally, a few months ago, I bought a deck of tarot cards. Yes, I really did! The pictures and designs are really pretty, the meanings are fascinating, and the history is interesting.

Yet that first night, as I went to bed knowing there were tarot cards in my bedroom, I was afraid. I knew it was irrational, but I was afraid nonetheless. But nothing happened. Nothing seemed changed. I had brought tarot cards into the house, and yet even after a few days nothing was different. There was no oppressive force, no sudden failure of school or family, no inability to concentrate, not feelings of hatred or anger. Now of course I didn’t expect any of these things – I am an atheist, after all – but my fear of the tarot cards only disappeared as I truly came to see tarot cards as simply pieces of card stock with pictures printed on them, nothing more, nothing less.

I’ve actually learned something from tarot cards that I didn’t expect to learn. You see, it seems to me that the way people tell fortunes with tarot cards is the same way people find pertinent advice for their lives in passages of the Bible. Growing up, I would read a passage of the Bible and it would almost without fail mysteriously seem to relate directly to my life and what I was going through at the time. Clearly the Bible was divine! How else could this happen? Yet after learning the cards, I have read my fortune several times (very badly, I’m sure), and each time I’ve been astonished at how closely it seems to apply to what I’m going through. It’s not that I think either actually work or anything. It’s just that our brains are somehow hardwired to find patterns and applications, and so they do. If you want to argue that this happens because there is something divine or spiritual going on here, you’ve got to argue that it’s going on in both cases, and probably also in the case of the Koran and other religious texts, which I suppose it what my parents do when the link tarot cards and the Koran to demons. 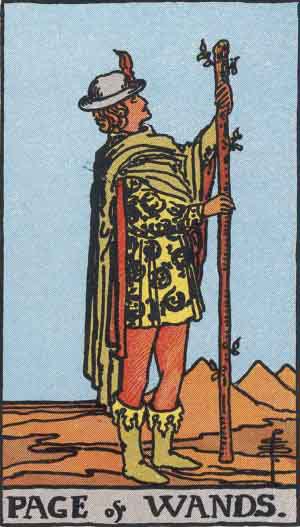 There’s a similar point, too. When I was a Christian, I used to pick one verse and meditate on it, trying to see what I could learn from it that day. And there was always something, something I could work on or some promise I could claim. For me, this helped confirm the divine nature of the Bible. But you can do the same thing with tarot cards. This card, for example, is the page of wands. The wands stand for passion and energy, and pages indicate youth (sometimes foolish, sometimes innocent and idealistic). So a page of wands essentially stands for childlike energy and optimism. It’s easy to see how you could meditate on this – thinking about how you need to approach issues in your life like this, or perhaps thinking about the pros and cons of such childlike optimism as it applies to your life, or perhaps thinking about the fact that this childlike energy can be foolish as well as optimistic. Really, wherever you are in life, you can find some way to apply it and have it mean something to you, something to encourage you throughout the day and help you to better yourself. This is just like how I used to mediate on individual Bible verses.

I’m glad I bought this deck of tarot cards. First, it’s helped me face my fears of demons and face them down (what could be worse than owning a deck of tarot cards, after all?), and second, it’s given me interesting food for thought about religion, patterns, and the human mind. And, if I ever miss having a Bible passage to meditate on, I can always use a tarot card instead!


Note: To those of you who may be pagan, I apologize – I’ve probably butchered this explanation!