Just before Christmas, the media reported that a man returning to his burned Paradise home found his family’s nativity scene—an heirloom—intact amongst the rubble.

(NBC News) – A nativity scene is bringing faith back to a family displaced by a California wildfire.

Matt Wedin and his mother lost their home in paradise during the Camp Fire.

Like thousands of residents, they were forced to evacuate the area with the fire incinerating everything to ashes.

Weeks later, Wedin was allowed to return to Paradise but what he found in the rubble was something of a Christmas miracle.

Matt Wedin says, “In the garage, I sifted through the ashes and mud, the only thing I found fully intact was the nativity scene. “The roof collapsed, the foundation, but that was in the garage and next to it was a metal table saw fully rusted and broke. It is incredible.”

The porcelain nativity scene was a family heirloom and had been owned by the family since Wedin was a boy.

Now just days before Christmas and in the midst of starting over, Wedin says he can’t help but trust that everything will work out.

Wedin says, “Feel like when I found the nativity scene, it was kind of a message from God. I don’t know, there is a higher power, there is hope at the end.”

The stories included a video of the set, with this image: 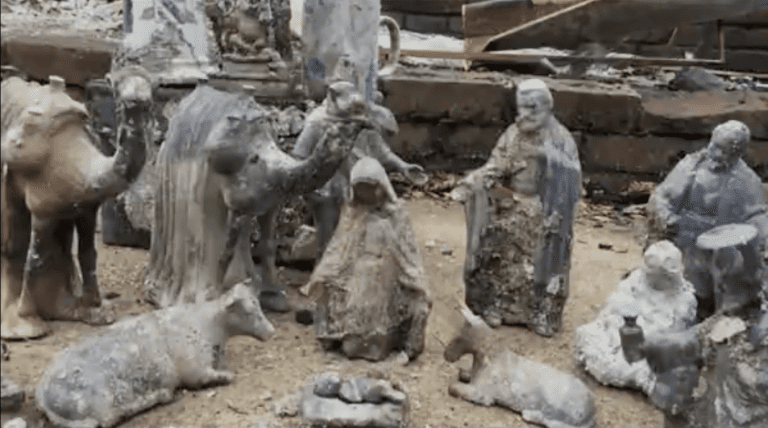 I understand that people need to reach for hope when there is tragedy. I get that, I really do. But could we reach for that hope by pointing to situations where neighbors worked together and were able to get people out who would otherwise have died? Or places where firefighters took a stand and turned the fire back, saving lives? The story above, and others like it, feels so off somehow.

We see this sort of story over and over and over again. Jesus’ face imprinted on a piece of toast. An opening in the clouds after a deadly tornado that lets in light in the shame of a cross. Light beams that resemble angels taking souls away after a deadly car crash. There are so many stories like these—and every time I see one, I want to ask why.

Why would you put your face on a piece of toast, but let children starve in Yemen? Why would you arrange a cross in the sky, but let a tornado destroy a school, killing dozens of children? Why would you leave visible evidence of angels at a crash scene, but not stop that crash from happening in the first place?

Over the past few years, I’ve often struggled with the limits to what I, as one person, can do. I’ve spoken about this with friends as well. Are we hypocrites to stay where we are, rather than dropping everything and driving to the Mexico border to help migrants and put our bodies on the line? We hear these stories, stories of children in cages and children dying, and it almost physically hurts to not do anything.

I cannot imagine having the power to do anything—literally anything—and then doing so little. Oh, but I’m not God. If I were God, I’ look at it all differently. Okay. Fine. But you know what? If God doesn’t have a conscience—if God doesn’t feel suffering the way we do—I think I’d prefer that he (or she) not exist.

These stories about God saving a Christian artifacts or leaving Christian symbology during tragedies that kill hundreds or thousands of people rather backfire, when it comes to me as a listener. No thank you. 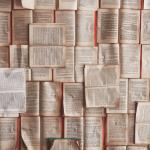 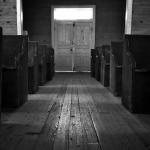