I recently came upon an old article from Patheos’ Catholic channel titled The Facts: Atheism Is Dying Out. It was published in 2015, but for some reason or other was being shared anew on social media. And it’s maddening. All of it. It’s also wrong.

The post is written by a Catholic priest named Dwight Longenecker, and begins as follows:

We often hear from atheists how religion is dying out as mankind comes to see the clear light of reason.

Yes, there are some extremely smug and condescending atheists out there, and yes, they do talk about an ideal world where religions declines and more people become atheist, trusting in “science, technology and reason.” (I am not terribly enthusiastic about their portrayals, because these same individuals are frequently sexist and/or racist, which rather makes me wonder whether it is “reason” or something else entirely—say, compassion—that we should be working toward.)

This is not the time to get off track, however. Longenecker writes that “statistics indicate that agnosticism and atheism are dying out.” What statistics is he talking about? He’s talking about a Pew report, which he linked to.

The Pew report found as follows:

Sixteen per cent of the population was unaffiliated to a religion in 2010 and Pew predicted by 2050, this would fall to 13 per cent, mainly because individuals in this group are older and have less children.

The countries with the most unaffiliated populations were China, Japan and the United States, and Pew noted that in 35 years’ time, the increase in unaffiliated individuals would be predominantly in the West.

I took a look at the linked research paper, and the issue here is population change.

China has the largest proportion of unaffiliated individuals in the world, given its state atheism. China also has a population that is projected to decline, especially relative to countries like India, which have high population growth and high religious affiliation. Similarly, most other areas with high numbers of unaffiliated persons—Japan, Europe, the United States—are also projected to see their populations decline, whether in absolute terms or relative to that of other countries.

Interestingly, however, while the rate of unaffiliated individuals is projected to decline, the absolute number will increase: 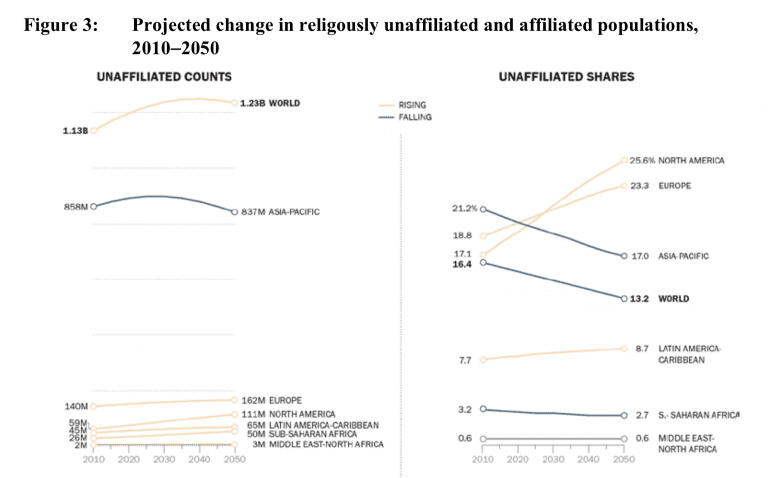 This image is a bit difficult to read; I apologize for that.

Longenecker aside, the actual finding here is that Europe and North America will see a growth in religious unaffiliated individuals (but not significant overall population growth) while Asia will see a gradual decrease, due in part (it appears) to a projected declining overall population. (Grouping Chinese atheists together with atheists in the U.S. and Europe, when China has state atheism and persecution of unlicensed religions, feels odd to me, but this is apparently how this data works).

Longenecker acknowledges that Islam is expected to overtake Christianity as the dominant world religion by 2100, but while he was more than happy to gloat about a decline in the percentage of religiously unaffiliated individuals as compared to other religious groups, he’s not as pessimistic about projections that suggest declines in his own religion’s global dominance.

Why? Well, there’s this:

These projections are based only on demographic trends. We should remember that most predictions like this end up being wildly inaccurate because they cannot predict a whole range of other variables.

Nice of him to tell us this only when discussing the rise of Islam and comparative decline of global Christianity, and not earlier.

Here are some unpredictable variables which could affect these predictions:

Let’s have a look at each item Longenecker offers.

—A revival of Christianity in the West. In the late eighteenth century atheism, rationalism and Freemasonry seemed to have taken over Europe. By the mid to late nineteenth century religious revival had swept through Europe and Christianity was surging forward. This revival was a result of fervent preaching, supernatural occurrences like Lourdes, new saints and evangelization.

Okay, this one seems fair enough.

Um, what. Longenecker seems almost excited about this possibility.

—Mass conversions – history has shown (Mexico in the sixteenth century) that there can be an outpouring of the Holy Spirit and whole populations will suddenly convert to Christianity. While missionary efforts to Islamic countries are largely unsuccessful a supernatural conversion of Muslims to Christianity could change the landscape.

—Immigration and population controls. Western governments might start restricting Islamic immigration and deport Muslims. This would alter the religious scene and make the predictions go awry.

Would it really, though? Muslim individuals who seek to immigrate don’t somehow vanish if they’re turned away. Besides, Muslims who immigrate to Western countries tend to have fewer children. Isn’t it possible that turning Muslim immigrants away from the U.S. might actually result in a higher overall number of Muslim individuals in the world?

—Unexpected change in human reproduction. Many of the predictions are based on the assumption that artificial birth technologies will continue to advance throughout the world. Things could go either way: Muslims who are reproducing more than Christians might start to use artificial contraception and abortion or Christians might stop using them. Social trends might be reversed by economic conditions and people may start wanting large families or the unimaginable might happen: birth control pills might stop working and everyone will start having more babies.

Notice Longenecker’s focus on birth rates, though—it’s like he’s concerned about which religion is going to outbreed other religions. But then, that is exactly what he’s focused on, because most people ascribe to the religion of the family they’re born into. This is one of many reasons I find the idea of a benevolent God who requires belief in a specific religion—on threat of eternal damnation—so absurd. My first grader told me the other day that he can’t say what religion he is right now, because he “hasn’t chosen” which religion he wants to be yet. But that is damn unusual. Most people join a religion by reason of birth into it.

And if birth into the wrong religion gets you damnation unless you find out the mistake and switch—especially when switching is so very rare—well then. That seems messed up, to put it mildly.

Speaking of switching, the report Longenecker repeatedly referred to includes some fascinating information that he neglects to mention: 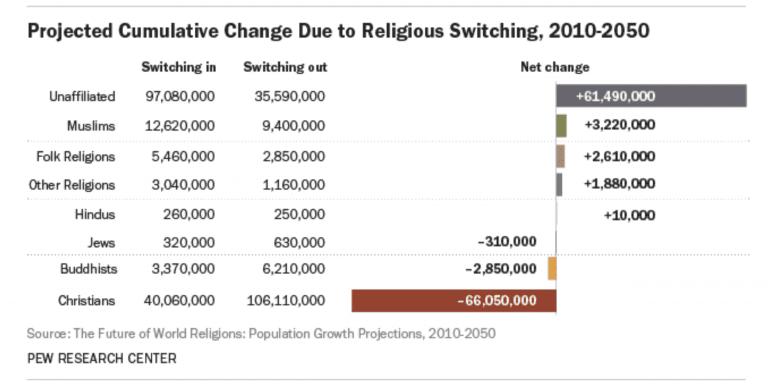 It’s interesting that Longenecker completely avoids mentioning this seemingly important information. According to Longenecker, despite gaining well over twice as many new adherents than Christianity—and losing a third as many members—“agnosticism and atheism are dying out.” Where is Longenecker’s concern for Christianity? Why is Christianity bleeding members like no other religion? Why doesn’t he even raise this question? It would seem to be relevant to his concerns!

If I looked at my beliefs the way Longenecker does his, this is the point where I’d be declaring victory in the world of ideas, noting that my religious group (unaffiliated) will see more conversions than any other. But I’m not, so I’ll leave that argument aside.

Let’s look at how Longenecker concludes:

The bottom line is that religion is here to stay, and the predictions are that all religious groups will experience growth through the end of the century.

Atheists and agnostics are the only ones (along with Buddhists) who will see their numbers decline.

Um, what now. No, atheists and agnostics will not “see their numbers decline.” Their overall percentage of the population is projected to decline, sure, but the unaffiliated group is actually expected to gain members. So let’s be accurate here.

That Longenecker could look at a report that projects that the number of unaffiliated individuals will increase by over 100 million people and yet declare atheism to be “dying out” makes me see red. I do not consider myself a “New Atheist,” and I am not particularly concerned about whether the number of religiously unaffiliated people increases or declines, but this guy got even my hackles up. He started with his own preconceived conclusion and saw only what he wanted to see, and nothing else.

Little upsets me as much as misinterpreted statistics. 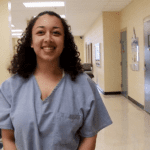 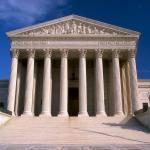 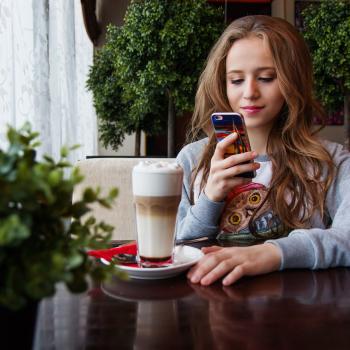