Coming out (as an atheist) is a journey not an event

For those raised in religious families surrounded by religious friends and relatives, coming out as an atheist is a big deal. It means risking the potential – and in many cases the likelihood – of losing friends and experiencing damaged relationships with relatives. It may even mean facing emotional manipulation and the pain of rejection. It means a complete change of identity.

Personally, I don’t see coming out as an atheist as a one time thing. For some it may be, but for me at least, it has been a journey rather than an event. I’m going to outline what I see as four steps of coming out as an atheist in my own life. If you were raised in a secular family or in a family where religion played only a minimal role, this may all seem foreign to you. If you were raised in a highly religious family, it may sound familiar.

Step 1: Coming out to yourself

First you have to come out to yourself. This isn’t always an easy thing to do – to admit that you no longer believe, that you really are one of those people, an atheist.

In many cases there is a period of denial, where you try to force yourself to believe even as somewhere inside you know you don’t. There may be a panicky feeling as you try to hold on and not let go. Letting go of belief would mean turning your life upside down, after all, it would mean everything changing.

Then there is the problem of the stigma associated with the term “atheist” in religious circles. Growing up I was taught that atheists were selfish, unkind individuals who lived meaningless lives without love. I believed atheists were hateful and mean, constantly depressed and unhappy.

One day as I was still dealing with my doubts I met and befriended a family, a couple and their two children. They radiated love and happiness and excitement about life. And then I learned that they were atheists. Atheists. This was an important moment, the moment I realized that everything I’d been taught about atheists was wrong, that atheists really could be happy and healthy and live meaningful lives.

Later, when I finally admitted to myself that I was an atheist after struggling in vain to preserve my faith, my immediate reaction was relief. The internal struggle was over. The cognitive dissonance was over. I felt free and light and finally at peace.

Step 2: Coming out to potential allies

The next step is coming out to close friends and relatives you think might be allies even if they don’t completely understand. Even this step isn’t easy, because you can never know for sure how a religious friend will respond, even those you consider more open. For many, you’re asking them to change their perceptions in order to accept you, and you’re challenging their stereotypes and biases.

Most of the religious friends I had in college had mellowed by the end, and it was to them I came out as an atheist first. There was surprise and there were questions, but there was also an acceptance – even from those who didn’t understand.

Coming out to the few relatives I thought might be potential allies was harder. The fear of rejection, the fear that maybe this would be crossing the line, was strong. I didn’t want to lose the relationships I had. The first time, though, was amazingly affirming. “Well then what do you believe in?” I was immediately asked. “Love,” I responded, fumbling for the right thing to say. “Then I guess we believe in the same thing,” was the response. And that was it.

The nice thing about this step is that it means creating allies – people who know you no longer believe but are okay with it, and supportive even if they don’t completely understand.

Step 3: Coming out in your life

Then there is actually contacting local atheist groups and living life as an atheist. This means stopping going to church, stopping pretending, and instead living life fully and genuinely. It means being real.

When I started the graduate program I am in today, I was completely open about my lack of belief. It’s not like religion comes up all the time or anything, but I didn’t hide my atheism. And there was something wonderful about that. The new friends I made, the new people I met, I did it all as me, not as someone pretending to be something else.

When I got a new doctor a year ago, I had to fill out an information form. One thing it asked was “religion.” Without hesitation or fear, without second thoughts or dissembling, I wrote “atheist.” Something as simple as that can be freeing.

Meeting other atheists, through the Secular Student Alliance and other groups, was also part of this process. It means knowing you’re not alone, knowing that others have been through similar experiences. It means knowing it’s not just you.

The last step is coming out as an atheist to relatives or old family friends you know won’t be okay with your unbelief. The difficulty behind this step is that it means almost certain rejection, and it also means causing people you love a great deal of pain and likely going through a great deal of pain yourself. While the first three steps can each be empowering, this step is simply hard.

In many ways this step is like ripping off a band-aid. Sometimes it’s best to just get it over with for once and for all, and waiting around and contemplating it beforehand only makes it worse. Furthermore, some may hold that this is a step that should be taken out of principle, and if relatives want to cut them off, so be it, their loss. In some ways, I envy that resolve.

For others, though, this step is something to be put off, for whatever reason. Sometimes it’s a desire not to bring unneeded pain to aging relatives. Sometimes, especially for those with childhoods especially enmeshed with their parents, it’s a desire to grow stronger and more independent before making this step.

Some may even decide taking this step isn’t strictly necessary. There’s no rule saying you have to tell your relatives everything you think and believe, after all, and the best policy may in some cases be a moratorium on discussing things like religion or politics. When you live in a different city or even state, it can sometimes be possible to simply hide certain parts of your life, to leave things unsaid and unspoken.

I think it should be clear by now why I say that coming out as an atheist is a journey rather than an event. For me personally, it’s a journey that is still unfolding, and I’m sure I’m not alone in this. Someday it will be a journey completed.

For those raised in secular families, or families where religion played a minimal role, this entire discussion probably seems strange. It may be hard to understand the difficulties an atheist from a highly religious background may face when coming out.

I do think, though, that it’s important to emphasize that each person’s journey will be different, and that that’s a good thing. Every individual person is different, after all, and everyone’s circumstances differ as well.

Wherever you are, I wish you well on your journeys.

February 26, 2012
On anonymous blogging and "coming out" as an atheist
Next Post 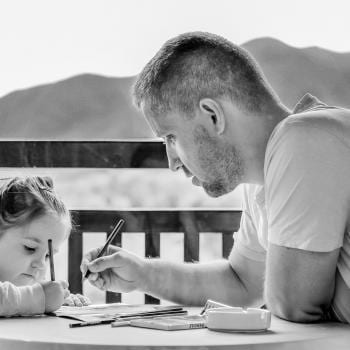