My goodness, the almost single-minded emphasis on violence in the boys’ toys is seriously disturbing!

One other thing, slopping over into Second Amendment issues. I do not say this in any rah rah support of whatever our government might do with its drones. One of the reasons why I think the Second Amendment needs to be understood as applying to more than hunting rifles — to things like shoulder-mounted surface-to-air missiles — is that we are going to need something to shoot down the government drones.

This is exactly what I was taught growing up. I was taught that things like the assault weapons ban were wrong because we needed to be able to own things like machine guns and tanks so that we could fight back against government tyranny. This future battle was not merely hypothetical. We believed it was coming. Dad didn’t teach us kids to shoot because we were a hunting family. We weren’t.

I was taught that the second amendment was put in place so that the people could be armed against potential government tyranny. The idea was that if the people are all armed to the teeth, the government can’t pull a fast one and take away their rights. It can’t do that because if it does, the people will fight back. Therefore, it is critically necessary that the people be able to own the same kinds of weapons that the army owns, so that it can actually effectively fight back. If the army has drones but the people don’t, well, that’s a recipe for complete and total tyranny.

But now, as I look up the second amendment for this post, I can’t understand how in the world anyone actually gets that idea out of it.

Now I’m no constitutional scholar, but that sounds like it’s saying that the people should have guns because they might be called up to defend the nation against foreign intruder. It’s important to remember that at the time this amendment was put into place, we did not have a standing army. Instead, if there was a threat to the nation the local people were called up to fight. And in this situation, it was pretty important that they have guns. In fact, when Andrew Jackson called up recruits during the War of 1812, many of them had no guns, and that angered him very much. And you really didn’t want to anger Andrew Jackson.

But all of that is neither here nor there. What is important here is that some portion of Americans believe that government tyranny – in the form of regulations – is becoming untenable, and that it might become so bad that an armed revolution is necessary to protect the people’s rights. Because of this possibility of impending revolution, it’s important to own guns, and not just handguns and rifles either.

The fascinating part is tracing all of the connections that go on here. Remember the militia movement of the 1990s? I’m not sure how direct the links, but the rhetoric of the militia movement has infused some sections of evangelicalism and fundamentalism, and, most especially, the Christian Patriarchy and Quiverfull movements. This idea that the federal government has become/is becoming tyrannical, the belief in a remnant of true Americans who will need to rise up against the government, the fascination with military and weaponry, it’s all there. I mean my goodness, Bill Gothard runs his own boot camp.

Perhaps most fascinating of all is that this militia/dominion culture crosses the premillenialist/postmillenialist divide. What I mean is this: Some evangelicals and fundamentalists believe that the world will end with the rapture of all true believers, a seven-year tribulation, and the return of Christ while others believe that Christ will not return until the whole world has been evangelized and brought in tune with what the Bible says. It would seem that those who believe that the world must become a sort of theocracy before Christ returns would be more interested in guns and military than those who believe that the believers will be raptured at any time, but this isn’t actually the case. The militia/dominion interest in weaponry and military is present in both groups.

But of all the organizations involved in the Christian Patriarchy, that Vision Forum would embrace a military culture is perhaps the least surprising. Vision Forum, after all, is one of the few that openly and without concern speaks in the language of dominion and conquest. I do want to be clear about something, though. The number of families that buys everything Vision Forum teaches, or everything Doug Wilson or Bill Gothard or any other leader in the Christian Patriarchy movement teaches, is not all that large, and one thing I am noticing more and more is the attrition rate in the second generation. These are ideas to be aware of and oppose, but I don’t want you to get the idea that we’re facing some sort of imminent dominionist revolution. We’re not.

Nonreligious
What Trump's 401k Story Says about How He...
Love, Joy, Feminism 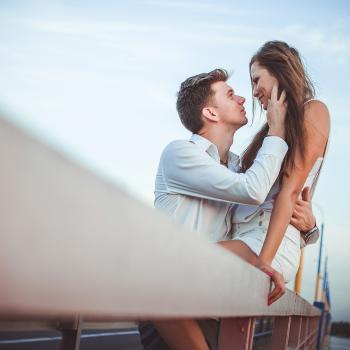 Nonreligious
Treat Having Sex with Your Husband like it's...
Love, Joy, Feminism
TRENDING AT PATHEOS Nonreligious