Seriously, I’m really getting tired of people griping about how their FREEDOM OF SPEECH is being violated because people don’t like what they’re saying and say as much. Look, you are perfectly free to call a gay person a pervert. Really! But that does not mean I can’t call you out for that, or that I have to be buddy buddy with you, or that I have to endorse your hate. Heck no. And you know what? You are perfectly free to call a woman you don’t like a c***. Really! But if you do that, be ready for some serious backlash, because believe it or not, being hateful and sexist has consequences.

Freedom of speech means that the government does not censor speech. It doesn’t mean that when you say hateful things everyone around you is required to nod and smile. I mean really, the Westboro Baptists say terrible horrible things, but the government doesn’t stop them, because they have freedom of speech. Essentially everyone in this country abhors them, and many people speak out against their hate. And you know what? That does not violate their freedom of speech! Free speech does not mean being able to say anything you want to without being labeled a bigot.

This isn’t that complicated. Really.

Oh, and people making comment policies, or banning people from commenting on their blogs? That doesn’t violate anyone’s freedom of speech either, because it’s not the government that is making those rules. It’s people making decisions about their own blogs. Believe it or not, no one has the right to comment on other people’s blogs. The same is true of conferences and work places. An independent entity making rules for running things on its own turf is not a violation of a person’s freedom of speech.

So you are perfectly free to call gay people perverts or women c***s. But don’t think your freedom of speech means you can do that without people condemning you for it, or without people choosing not to associate with you because of it, or, well, without consequences. Because it doesn’t.

February 5, 2013 The Real Victims of Sexual Assault in the Military ... Men's Careers?!?
Recent Comments
0 | Leave a Comment
Browse Our Archives
Follow Us! 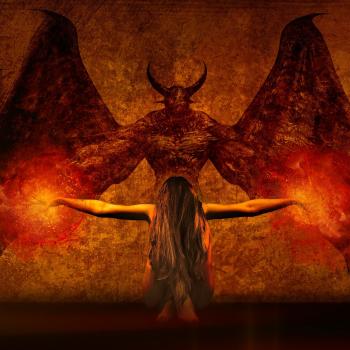 Nonreligious
I Looked Into a Nonprofit That Felt Like...
Love, Joy, Feminism
TRENDING AT PATHEOS Nonreligious

Bolton Book: Trump Told Me in August of...
John Bolton's new book says that Trump told him in August, shortly...

Ancient Egyptians believed cats were divine. Cats agreed....
Even the ancient Egyptian queen Nefertiti knew that her cats were more...
view all Nonreligious blogs
What Are Your Thoughts?leave a comment
Copyright 2008-2017, Patheos. All rights reserved.