Whence Opposition to Birth Control? An Illustration. May 14, 2013 Libby Anne

I’ve written before suggesting that if pro-lifers are consistent, they should be in favor of birth control. And indeed, there are some who are. But there seem to be more who aren’t, and that is only more true when it comes to Catholics. I recently came upon an illustration that explains how Catholic pro-lifers can be anti-birth control, and anti-abortion at the same time. 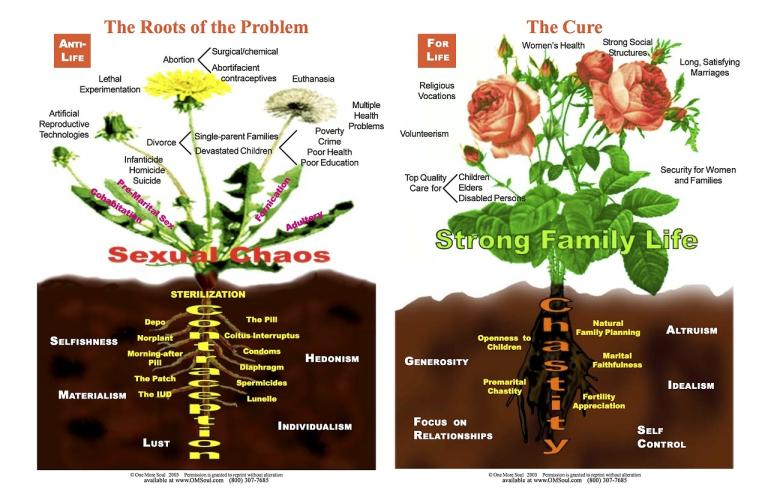 Click the illustration to view it larger. For those who can’t view the image, let me offer a brief description.

On the right is a rose, “Strong Family Life,” with its root, “Chastity.” Chastity is rooted in generosity, altruism, idealism, self control, and a focus on relationships. The leaves and flowers of the rose Strong Family Life are religious vocations, volunteerism, long, satisfying marriages, security for women and families, women’s health, strong social structures, and top quality care for children, elders, and disabled persons.

One reason an illustration like this can be appealing is that it’s so simplistic. For many, there’s something comforting about a dichotomous and uncomplicated way of viewing the world. I grew up in a conservative evangelical family where the world was viewed in just such black and white terms, devoid of shades of gray, and I’m convinced that one reason that conservative religious traditions have proven so successful is that they offer simplicity and reassurance in an extremely complicated world.

Of course, it is that very simplicity that is the downfall of this illustration. Simply put, the things on each side don’t match the way they’re supposed to—the things that are supposed to flow from the things below them actually, well, don’t.

And this goes for basically every connection in those images. You can assert that running your washing machine causes warm weather, but that doesn’t make it so.

The other thing this illustration suggests is the elevation of others over self, and of “self control” over “hedonism.” I grew up in a world where we were taught to be “selfless” rather than “selfish,” and it’s only as an adult that I’ve found that what is actually needed is a balance. If you don’t care for yourself, or invest in self care, after all, you can’t effectively care for others. And more than that, our own health, happiness, and well-being is important too. So the very premises this image holds of what is good and what is bad, and what is the correct balance (or lack thereof), is also off.

But one thing this illustration absolute does a good job of revealing is why some pro-lifers insist that abortion actually stems from contraception. There’s this overly simplistic, black and white idea that if everyone just practices chastity, abstaining from premarital and extramarital sex, the result will be a world of rainbows, sparkles, and children laughing. Poverty would disappear, marriages would all be satisfying, and our society would be strong. But it’s not that simple. It just doesn’t work like that.

Also, seriously, what is this thing about chastity resulting in women’s health? They clearly haven’t heard of Beatriz. Beatriz is only 22 years old, and is going to die as a result of El Salvador’s ban on abortion. She’s having life threatening pregnancy complications, but is being denied an abortion—even though her fetus is nonviable, being anencephalic. I don’t know whether Beatriz is married, but even if she weren’t, her the threat to her health isn’t caused by improper sex—it’s caused by pregnancy. Believe it or not, getting rid of contraception and abortion isn’t going to lead to improved women’s health. Did I mention that this illustration is simplistic?

May 13, 2013
Homeschooling To Avoid the Truancy Officer
Next Post