Homeschooling To Avoid the Truancy Officer

Homeschooling To Avoid the Truancy Officer May 13, 2013 Libby Anne

There is a homeschool truancy problem. To be more specific, there is currently a problem with parents of chronically truant children claiming that they homeschool in order to get around truancy laws and avoid prosecution, and then not actually homeschooling. I’m not talking about people who make the choice to homeschool their children for religious or educational or social reasons and then set about making an effort to give them a good education—I’m talking about parents who deliberatly make use of lax homeschooling laws to conceal and enable educational neglect, never intending to actually homeschool. And public school administrators, truancy officers, and state attorneys know that this is a problem.

Homechool laws in many states are so lax that homeschoolers aren’t required to register—or in some cases, to even tell their local school district that they are withdrawing their child to homeschool. In states that do have registration requirements and other regulations on homeschooling, these laws are often unenforced. As a result, there were in 2006 1,708,764 children unaccounted for in the United States, children who existed on the census but not on any list kept by state departments of education, whether that be public schoolers, private schoolers, or homeschoolers (in the states with registration). We literally have no way of knowing whether or not these children are actually being educated.

Now let’s turn to some examples, starting with article published just last week. Public school officials in Rapid City, South Dakota, have done more to crack down on truancy this year than in the past, but, as the article reveals, the state’s lax homeschooling laws have gotten in the way of their efforts.

In Rapid City, school administrators have taken a number of proactive approaches to promote good attendance, but sometimes their efforts aren’t enough and the Pennington County State’s Attorneys Office has to get involved. Still, some parents have found a way to avoid the legal repercussions:  they homeschool. “There is sometimes a movement for parents to come in and as soon as truancy procedures start then they’ll put in a homeschool application,” Superintendent Dr. Tim Mitchell said.

While there is a statute that requires homeschool parents to keep educational records, the school must have probable cause to check them. “We have to have some sort of a complaint that has to be investigated,” Dr. Mitchell continued.

Next, let’s look at what a truancy officer in Michigan has to say:

Michigan has among the least restrictive homeschooling laws in the nation: A parent who wants to homeschool can declare their intent, and that’s that.

One person who says that’s a problem is Jerry Jansma, the Kalamazoo County attendance officer who investigates truancy cases.

Jansma said that Michigan’s liberal home-schooling law is a way for parents and students to skirt school-attendance requirements.

“The home-school law is abused up and down, left and right,” Jansma said in an interview last week about truancy issues. “I despise that law, because the families I deal with use as a loophole. Happens all the time.

“You’ll have a parent who is clearly neglectful and we can’t get resolution, and they’ll say, ‘I’ve decided to home-school my child’ and there’s nothing I can do about it.”

Now let’s turn to a state attorney in Illinois:

[State attorney Charles] Garnati stressed that he supports home-schooling in general, just not for parents who abuse the privilege.

Some parents have allowed their children to be truant from public schools, and when threatened with legal action, have pulled their children from that school to avoid prosecution, Garnati said.

“It’s what I call an end around,” Garnati said. “These are parents who have no intention of home-schooling their child. Unfortunately, there is no law on the books that criminalizes improper home schooling. What concerns me are those children who are chronically truant from school.”

“People don’t have to register with our office if they decide to home-school their kids,” Sullivan said. “The only way we know the student is being home-schooled is if the parent pulls the student from the school for whatever reason or if we get a report that the student has been seen out on the streets. Otherwise, it’s hard to track.”

How often do educationally neglectful parents use homeschooling as a loophole to avoid truancy laws? While we have articles like the ones above, and also anecdotal evidence of this phenomenon, we don’t really have much data to answer that question. What we do have is data collected by Stephen L. Endress in pursuit of a Ph.D. in educational administration at Illinois State University (read his full dissertation here).

Endress sent out surveys to 3,506 public school principals and received 594 filled-out surveys. This isn’t a great response rate (only 16.9%), which makes generalizing difficult, but the results are interesting nonetheless. The 594 principals who filled out surveys reported that a total of 679 students had been withdrawn from their schools to be homeschooled in the past twelve months. 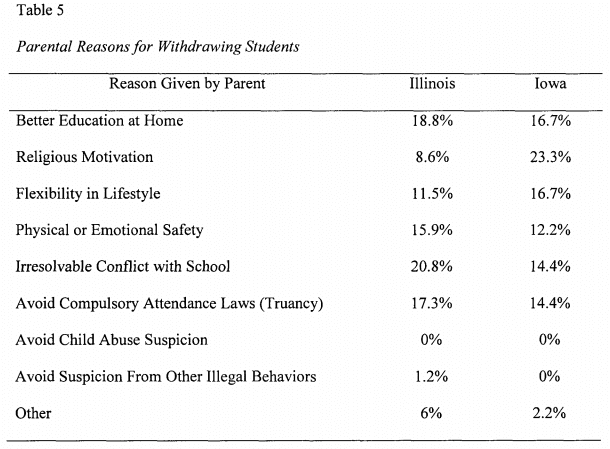 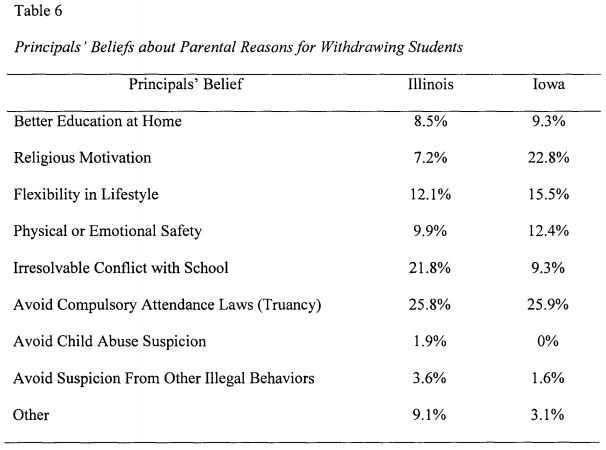 In other words, when principles in Illinois were asked why they thought children were being withdrawn to homeschool, the answer in 25.8% of the cases was to “avoid compulsory attendance laws (truancy). In Iowa this was the answer for 25.9% of the cases. Of course, it would be easy to suggest that these principals were wrong and that the parents of these children really did intend to homeschool them and were not actually using homeschool laws to get out of any responsibility toward educating their children. But even then, you would have to grapple with the fact that in 17.3% of the cases when Illinois parents withdrew their children from these principals’ schools, and in 14.4% of the cases in Iowa, those parents actually admitted that they were doing so to avoid compulsory attendance laws.

Endress’s numbers aren’t perfect. The response rate was low and his data is based solely on self-reporting by public school principals. But what Endress’s data does make clear is that there is indeed a problem with homeschooling laws being used as a loophole by the parents of truant homeschooled children—and that this problem is not insignificant. Endress also shared some comments principals left on the survey:

Students avoiding compulsory attendance laws was of primary concern to most principals in Illinois and Iowa. An Illinois principal of a 200-student school said, “My past experience with students withdrawing to be home-schooled was to avoid the compulsory attendance law. I would like to see some regulations on home-school.” An Iowa principal of a 300-student public school agreed. “From my experience, the number one reason has been to avoid legal issues related to truancy. I have had a number of younger high school students with a pattern of poor attendance coming into high school, who once we get juvenile court involved withdraw from school claiming that they are going to be home-schooled. It isn’t a question of the quality of education received because they do not receive any. It is basically a step taken to stay one step ahead of authorities.”

Educationally neglectful parents’ use of lax homeschooling laws to avoid truancy prosecution is a serious problem, but I should probably take a brief moment to note a related problem as well. Namely, some public school officials in states with lax homeschooling laws have actually been encouraging dropouts to say that they’re being withdrawn to homeschool and thus lowering the school’s dropout rate. In other words, they abuse their states’ lax homeschooling laws so that they can wash their hands of dropouts and boost their school’s funding by artificially boosting their graduation rate. There are a million and one reasons this isn’t okay, and some states have become aware of this practice and are cracking down on it. Still, as long as homeschooling law requires nothing more of homeschoolers than dropping out of school, it’s not surprising that it would be used to cook the books.

It seems to me that there is ample room for homeschooling parents who are working hard to educate their children to favor basic regulation as a way to ensure that homeschooling laws are not being abused. Reader Mary recently made this point quite succinctly, although she was specifically referring to the sort of educational neglect that can occur when parents homeschool because their religious lifestyle demands it rather than out of a desire to actually give their children a good education:

Yes it is tragic to see parents use homeschooling for their own selfish means. I have homeschooled for many years, and I still believe there needs to be more accountability. I have seen cases where the mom keeps having babies every year, and after some time just can’t school anymore. Yet they would not ever consider regular or private school. Very sad. Years ago, we saw a few kids at a homeschool co-op who were in 2nd grade, yet could not even write their own names, much less read or understand math. When we met mom, she was pregnant yet again, tired, and cranky. The kids did not have learning disabilities, just a worn-out mom. Sorry to ramble, but this just makes me so angry. It makes genuine homeschool families suspect.

Perhaps more homeschoolers will come to this same conclusion and there will be necessary willpower to bring about change. After all, if the laws were changed to make it easier for school districts to tell genuine homeschooling families from those who claim homeschooling to cover truancy, these homeschool families could be more sure that they wouldn’t be mistakenly seen as truant. Until then, though, lax homeschooling laws will continue to allow the parents of truant children to circumvent compulsory education laws without requiring them to actually lift a finger to educate their children. 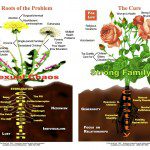