Blogger: COVID-19 Has Shown SAHMs and Homeschooling Are Best

I was not wondering how patriarchal blogger Lori Alexander was responding to COVID-19, thank you very much, but someone shared something and there it was. Lori posted the following on facebook: 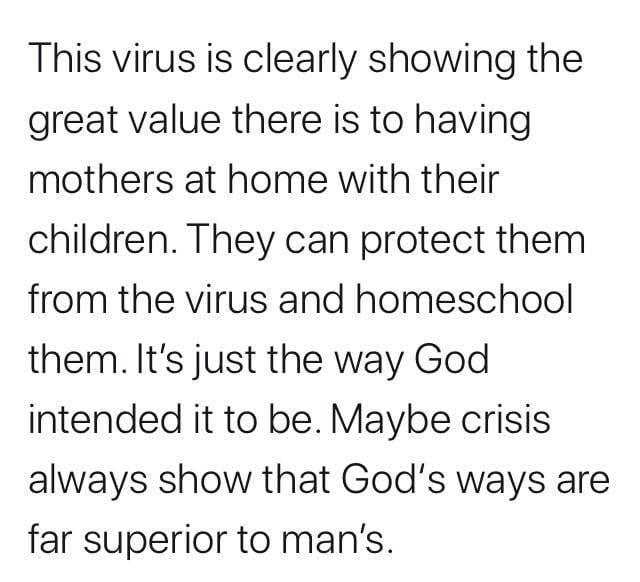 Text is as follows: The virus is clearly showing the great value there is to having mothers at home with their children. They can protect them from the virus and homeschool them. It’s just the way God intended it to be. Maybe crisis always show [sic] that God’s ways are far superior to man’s.

I’m a little unsure whether she’s simply saying that this crisis has shown that the stay at home homeschool mom model is superior, because it’s optimized for global pandemics, or whether she’s saying she’s glad so many working mothers with kids enrolled in school are now involuntarily stuck at home with their children. Some other memes she’s shared suggest that, at the very least, she’s hoping that this crisis will set many women on a path toward being at home, and homeschooling, permanently.

(Does Lori know that a whole lot of dads are at home with their kids now? I’m not sure!)

Can I just say something here? I was homeschooled, and the best thing about being homeschooled was going to the library, to museums, to homeschooling co-op where we saw our friends. We were engaged in so many activities my mom sometimes said we were “car” schooling rather than homeschooling! Due to social distancing, all of that is inaccessible to the many families now educating their children at home due to COVID-19. It’s also inaccessible to families that were already homeschooling.

COVID-19 has changed everyone’s lives, not just working mom public school families. It has forced homeschooling families, too, to change the way they operate. I feel like that’s getting missed here.

Also, I don’t think Lori has any idea how many mothers on my twitter timeline are struggling to both work from home full time and watch their kids. It isn’t fun. It’s not a party, or a break. They can’t wait to get back to work and send their kids back to school, when this is all over. And that includes me.

So, what else has Lori said about COVID-19? Plenty.

My mom didn’t fear germs at all. She feared toxic chemicals.

Yup, this is going to be fun.

She learned that a strong immune system is the best fight against germs and the diseases that result from them. So I grew up believing the same thing. I haven’t gotten the ordinary illnesses (colds and flu) much until I began having grandchildren. If they had a cold, I would get it and it would be much worse than the others due to my weakened immune system because of the lack of hormone production and an almost dead pituitary. However, once I began taking elderberry syrup, I haven’t been getting their colds, thankfully. It really does work!

My parents used to say that we had strong immune systems because we played in the dirt and swam in ponds, which built up our immune systems. And it’s true that none of us had allergies. (It’s not true that we never got sick.) I’m curious, though, as to why this didn’t protect people in the Middle Ages from the Bubonic Plague. I’m assuming they had plenty of contact with dirt, muddy water, and nature in general.

We’re experiencing something in our country that has never happened in my lifetime. A national fear of a killer virus with the stock market plunging and the future unknown. It is a scary time for many but should we, as believers in Jesus Christ, give in to the fear?

Look at the Proverbs 31 woman. In some translations, we are told that she “smiles at the future.” The KJV states, “she shall rejoice in time to come.” We are to live by faith and not by fear. God is still on His throne and He holds the future!

Lori doesn’t say this, but I’ve heard from friends and relatives about churches out there that are preaching that following social distancing and other recommendations from the CDC shows a lack of reliance on God.

Mothers of young children, you can rest assured concerning this virus since no children from zero to nine have died from it and most children have mild cases of this. It seems to mostly be killing the elderly and those with health problems. (The average of death from the virus is 80 years old.)  I fit into the health problems category but I don’t fear it. I will do the best to keep myself healthy but trust the Lord with my life. Remember, this virus is NOTHING close to being like the Bubonic plague or polio, yet many are acting as if it were.

Yes, the bubonic plague was worse than this—in some places the majority of the population died—but it’s worth remembering that if our healthcare system is swamped by COVID-19 patients, people will start dying from other causes—things that would not have been fatal with a functional healthcare system.

Lori’s reference to Polio made me curious, so I did a little bit of research. The most obvious difference between COVID-19 and polio is that polio killed children while this kills the elderly, but that’s not the only difference. It turns out that most people who are infected with polio experience no symptoms at all (70%) or very minor symptoms like a fever or a sore throat (25%), and while 5% experience neck stiffness and pain in their limbs, only 1 in 200 polio infections results in paralysis. Of cases that result in paralysis, between 2 and 5% die.

In other words, COVID-19 is actually far deadlier than polio (around 1% of those who get COVID-19 die in places where there is a functioning medical system, compared with 0.025% of those infected with polio). Also, adults didn’t generally get polio because they already had immunity, whereas no one has immunity to COVID-19.

None of this is to belittle the pain caused by polio; if polio were still circulating in the U.S. today and 1 in 200 children were paralyzed as a result, there would be several children paralyzed at my kids’ school alone. However, to say that this current plague is nothing close to being like polio is factually incorrect. More than that, such a statement seems designed to suggest that the response to COVID-19 is based on hype and overreaction.

But! We’re not done yet!

I am not a hand washer since I’m not afraid of germs.

This is … not a good thing.

Lori says she has dry skin and doesn’t like washing her hands more often than strictly necessary (such as after using the restroom), but she does state that in light of COVID-19, she is going to start washing her hands after going outside her home for shopping or other activities, and that she will try not to touch her face, so in fairness to Lori, she’s not actually arguing against taking precautions.

This life will always be unstable and fearful. This isn’t our home. Many of the things going on in our culture (abortion, children being allowed to change genders, pornography, sex trafficking of children, and so on) are must more destructive to our culture than this virus or the stock market crashing.

I am very much against the sex trafficking of children (in they’re You’re Wrong About podcast episode about human trafficking, some of which is covered in text form here, Sarah Marshall and Michael Hobbes cut through some misinformation on this topic). But remember, with COVID-19 we’re talking about potentially millions of deaths. I’m not one for weighing bad things against each other, but like, this is a bad thing. Lori keeps comparing this to other bad things and arguing that those other things are worse, and I don’t understand the motivation.

Maybe God will use this virus for good. Our culture needs a good wake up call. We’re all going to die someday and many times things such as this cause people to examine their lives more closely. The prospect of illness and/or death is where the rubber meets the road and has the ability to wake people up from their slumber.

You know what, though? I bet people were saying this during the bubonic plague too. A certain brand of Christian is only too happy to argue that times of great trial or tragedy are God’s way of wooing us back to him. It’s not like Lori is saying something that out of the ordinary. That doesn’t change the fact that it makes me uncomfortable.

You know what? I think I figured out why it makes me uncomfortable. I’ve seen lots of progressives on twitter and elsewhere saying that maybe, just maybe, this crisis will be a wakeup call that will lead to the creation of a universal healthcare system in the U.S. The difference is that progressives are suggesting that maybe we can bring good out of this. Lori’s version invokes an all-powerful God who could end this crisis in a way we can’t. It’s impossible to divorce her words from the idea that God let this happen.

I’m going to leave you with the absolute best of twitter—Lin-Manual Miranda’s journal of his time at home with his own small child due to the pandemic, which is absolutely and completely adorable. 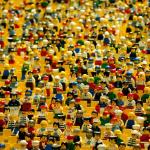 March 24, 2020
Abortion Opponents: Is Saving Lives Worth the Disruption?
Next Post 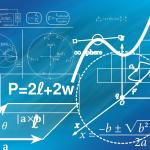