As you may know, the Duggars announced last week that their daughter Jessa is now courting. I’ve watched the conversation surrounding this announcement, and to be honest, my gut reaction has been to wish people would leave the poor girl alone. This is as close as Jessa is allowed to come to dating, and she almost certainly has all of the happy jitters that come with first love. I remember that time myself and have a lot of empathy for Jessa, and some of the more snarky responses I’ve seen have left me cold. When I read Samantha’s response, though, I realized that it was exactly what I would want Jessa to hear. And so with Samantha’s permission, I’m reposting her post here for you all to read. 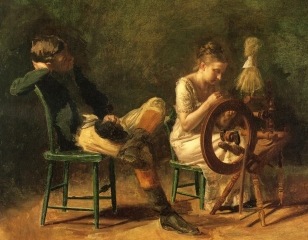 Originally posted on Defeating the Dragons

This week, the Duggars announced that their daughter, Jessa, had begun a “courtship” with Ben Seewald. News articles have been floating around in my facebook feed about this, and as I read a few of them . . . my heart sank. Many people are mocking the family, Jessa, Ben, her parents, for how they’ve chosen to handle this.

I can’t get behind the mocking. All I can feel right now is compassion for Jessa and Ben. It’s an emotion they might dismiss as completely unwarranted—from all appearances, they’re blissfully happy, and this courtship is what they’ve always envisioned for themselves. I don’t know about Ben, but everything I’ve seen from Jessa is familiar territory—she’s carefully “guarded her heart” so one day she could date with “intent and purpose.” The way she’s been taught to respond to romantic relationships probably feels very mature and sensible. It’s designed to be safe. Everything about it is carefully vetted, monitored, and controlled. There won’t be any unexpected surprises for them. This process will help ensure a happy, Spirit-filled marriage.

But, if I could sit down with Jessa over a cup of tea and talk with her, there’s a few stories I would share.

The eldest daughter of my “pastor,” Leah*, was in her early twenties when an evangelist that came to our church every year suggested a young man, Steve*, to her father. Over the next month or so, her father carefully vetted this young man. The first time Steve came to visit, he didn’t even meet Leah. Her father took him out to dinner, then they sat in his truck for hours while he grilled him from pages of notes and questions. Barely any stone was left unturned—but I remember my father commenting offhand that it’s not likely that Steve was really honest about most of those questions.

The next time Steve came, he and Leah were never given a moment’s privacy. They were never allowed to be more than a few feet away from another member of the family. When he left, they were not allowed to talk on the phone, and could only communicate through letters that were read, out loud, in front of the entire family.

They did, eventually, get married. The next thing I heard about her was that she and Steve had not yet consummated their marriage, not even after being married for months. They were complete strangers when they got married. They didn’t know anything about the other—the only person they had gotten to know had been the person her parents expected to see. Without any private moments, without the ability to talk without being constantly monitored, they didn’t really know anything real. They’d “courted” a performance, not a person.

When I was in college, one of my best friends got married. Their courtship story was perfect—charming, adorable, romantic in a Victorian sense. Her parents called him her “suitor” and his visits were “calls.” They had no physical contact—her father put the engagement ring on her finger when he proposed on the beach, in the moonlight—in front of their families. When they went through the wedding rehearsal, they held a handkerchief instead of holding hands. Their first kiss was at the altar, and Charity* looked like she was about to burst with happiness for the rest of the day.

It’s been a few years now, since they got married, and they’ve experienced some significant marital “bumps” in that time. There were a few moments when no one was sure if their marriage would make it. My mother was trying to give hers some comfort and advice during one of those hard times, and I remember hearing her start crying. “I don’t understand, I just don’t understand. We did everything right. None of this was supposed to happen.”

My own courtship experience was . . . ugly. We “talked,” getting to know each otherstrictly in group settings, just like we were supposed to. I asked my parents to come meet him, and we all went out to dinner. I made sure that my father had plenty of time to talk with him, to get to know him. John* asked their permission to “court” me, and we did under the supervision of both our parents. By the end of the summer, he laid out his plan for them, what he planned to do and how he planned to accomplish it, and asked their permission to marry me. When he proposed at a fancy restaurant, my parents were sitting at a table directly across the aisle. For the first six months, everything seemed perfect. It was all going exactly how I’d been taught it should.

But, after I had that ring on my finger and I was in the middle of planning a wedding, and after all our families were on board and we’d announced it to everyone we knew… that was when the abuse began in earnest. It was abuse he kept carefully concealed from anyone– abuse I was promised I was protected from, because, after all, we were courting. We’d done everything exactly how we were supposed to.

And I was trapped.

Because I’d been told to guard my heart, that once I give my heart away, I won’t have my whole heart to give to my husband.

Because I’d been taught that it was my duty, my responsibility, to make sure our relationship was perfectly chaste. He knew that– he sexually assaulted me, he raped me, and he used what I’d been taught against me. I was a cup full of spit. I was a half-eaten candybar. I was that rose with all the petals torn off. No one would want me, I wasn’t good enough for any other man.

I’d tell you that courtship doesn’t guarantee a happy marriage. There’s no magical promise that is impossible for either one of you to break. Following all the courtship procedures and rules means nothing when you realize that life has changed around you, and you might not believe everything you always did—and he hasn’t changed with you. Courtship doesn’t automatically grant you the ability to communicate without fighting or to have patience with each other. Most of the things you need for a healthy marriage you don’t get through having your parents monitor all your texts and never touching each other longer than a 30-second side hug.

I’d tell you that courtship doesn’t guarantee you won’t get hurt. People are very capable of hiding. People can be very good at cloaking everything about themselves—especially when they are given an insanely precise checklist to follow. The roadmap, the rules, the procedure—they’re not going to shield you from a man using those rules to get close to you so that he can hurt you.

You might be getting to know this person on an honest, deep level– I don’t know. It’s possible that he’s a genuinely wonderful man and both of you are being completely, bluntly honest. It’s probable that you were raised with the understanding that you never hide anything from your parents– and up to this point, why should you? But, it’s also just as possible that you’re both innocently unaware that you’re not really getting to know each other.

Courtship, you’ve been told, promises a safe adolescent experience, free from the trauma and heartache of a thousand “crushes.” Courtship holds the sweet sanctuary of your parents’ blessing and God’s promises. Courtship is about commitment, and honor, and responsibility, and those are the things that will keep your marriage strong.

And maybe—maybe it will.

It’ll be because of who you are, Jessa, and who he is.

September 20, 2013
CTBHHM: Having a Nervous Breakdown? Selfish Woman!
Next Post