Police raided a Christian sect in southern Germany, taking 40 children into foster care on suspicion they were physically abused and seizing sticks allegedly used to hit them, authorities said Friday.

Members of the so-called “Twelve Tribes” sect acknowledged that they believe in spanking their children, but denied wrongdoing.

The Twelve Tribes sect, founded in Tennessee in the 1970s, boasts 2,000 to 3,000 members and has faced child abuse complaints and the removal of their children in the past. In Germany, they have run up against both the country’s ban on spanking and its ban on homeschooling. Last year, the Twelve Tribes community there, which resides in its own compound separated from the surrounding community, founded its own private school to get around the ban on homeschooling; within the last couple of weeks, that school was shut down when it was found that it did not employ the required certified teachers. Accusations of abuse cropped up at the same time, and last week Germany authorities removed the children.

Several days ago Jörg Großelümern, who runs Netzwerk Bildungsfreiheit (Education Freedom Network) in Germany and is listed on HSLDA’s Germany page as one of two contacts for German homeschoolers, posted a link to the story on Michael Farris’s facebook wall along with some explanatory text. Michael Farris responded (for those who don’t know, Farris is the founder of the Home School Legal Defense Association—HSLDA—and is probably the most prominent spokesperson for homeschooling in the United States). You can see the exchange as follows: 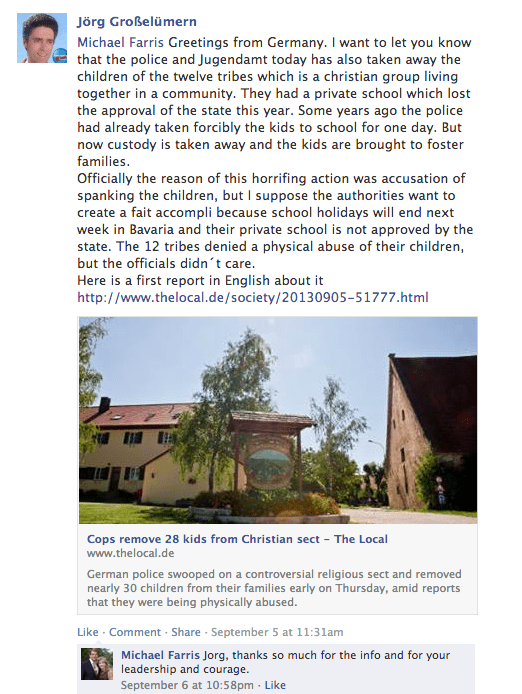 Later that day, one of Farris’s followers posted another link, voicing her dismay, and Farris again responded. You can see the exchange below: 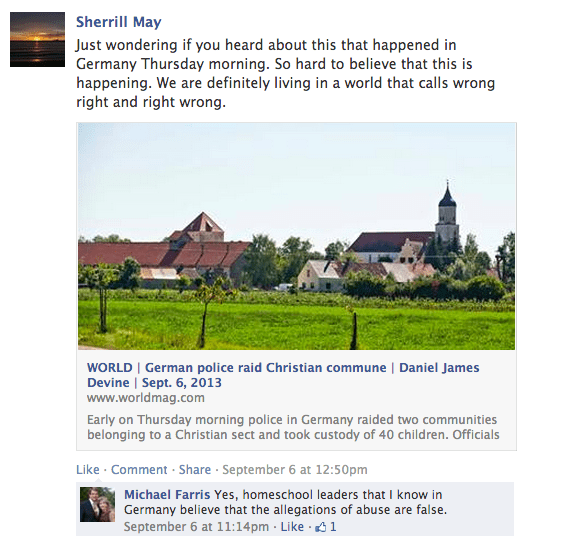 Today, the full extent of the charges against the Twelve Tribes group have come to light. And guess what? They have it all on film. [Trigger warning for abuse.]

The little blonde-haired boy is about four years old. He simpers as a middle aged woman drags him downstairs into a dimly-lit cellar and orders the child to bend over and touch the stone floor with his hands. Another little boy watches as the woman pulls down the first boy’s pants and then draws out a willow cane.

“Say you are tired!” commands the woman in an emotionless voice. The swoosh of the willow cane is audible as it strikes the screaming child’s bottom three times. The little boy refuses to say he is tired so he is hit again and again – a total of ten times – until, in floods of tears, he finally says “I am tired.”

Within the space of a few hours, six adults are filmed in the cellar and in an underground school central heating room beating six children with a total of 83 strokes of the cane. The graphic and disturbing scenes were shown on Germany’s RTL television channel last night.

They were filmed by Wolfram Kuhnigk, an RTL journalist equipped with hidden video cameras and microphones, who infiltrated a 100-strong religious community run by the fundamentalist “Twelve Tribes” sect in Bavaria earlier this year. Kuhnigk claimed to be a lost soul to gain entry. “Seeing this systematic beatings made me want to weep, it made me think of my own two children,” he said. He collected 50 beating scenes on camera.

Samantha, a fellow homeschool graduate, posted the link to the article detailing the filmed abuse to Farris’s facebook wall, and again he replied. Here is the exchange: 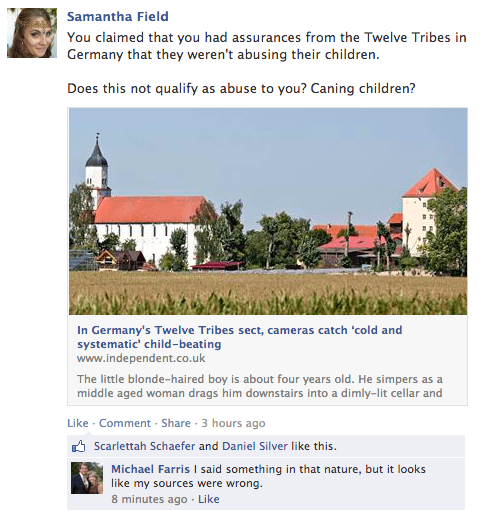 Farris should have waited for the facts before speaking—and he really needs to find more reliable sources.

To be honest, one of my biggest concerns about Farris is that he seems to always give the parents the benefit of the doubt and to assume that abuse allegations are false (invented by vengeful authorities with corrupt motives, of course). Assuming that parents are innocent before even looking at the evidence means that abused children go unnoticed and ignored. (Not coincidentally, speaking before having the facts is how HSLDA attorney Scott Sommerville ended up calling child abuser Michael Gravelle a hero. Oops.)

The default should not be to assume that the parents are innocent and the charges drummed up by vengeful authorities and lying children. The default position should be to take immediate steps to protect the children and then remain cautious and wait for the facts to come in. Somehow I don’t find it surprising that Farris places the interests of the moment above its children.

A commenter went and commented on Jörg Großelümern’s comment on Michael Farris’ facebook wall, asking what he had to say now that it was clear that the allegations were true, and he responded as follows: 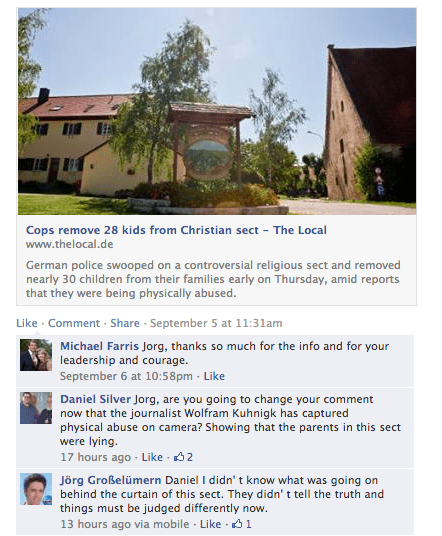 September 11, 2013
CTNAHM: The Proper Way for Wives to Challenge
Next Post