It seems Homeschoolers Anonymous has made an increasingly large splash in the homeschooling world. Prominent Christian homeschool leader Kevin Swanson himself felt the need to address the group in a recent broadcast on his Generations with Vision radio show. He gave it the title “Apostate Homeschoolers.” If you click the link to listen, the section on Homeschoolers Anonymous starts at 5:00 and goes until 10:40, when Swanson moves on to the Boy Scouts.

What does Swanson blame for the growth of the “homeschool apostates” and their increased networking and online activism? NCFCA homeschool speech and debate. Oh yes. NCFCA was started by Christian homeschool leaders to equip a generation of homeschooled children to be culture warriors, fighting against the godless secularists and working to establish a Christian America. But apparently, according to Swanson, it’s gone awry, and too many of its homeschool participants have left God’s Truth for the faulty world of man’s intellect and reason.

In other words, Swanson has stumbled upon the very real truth that indoctrination fails when you teach children how to think instead of what to think. But if ensuring that your young people retain your beliefs requires teaching them what to think without ever teaching them how to think, the problem is with your beliefs, not with the fact that certain of your young people figure out how to think and then walk away. That this is the response of the Christian homeschooling world—that perhaps teaching kids how to think was a bad idea—then what they have to offer is very sad indeed.

And just so we’re clear, this is what Kevin Swanson is now apparently afraid of. Look how scary we are, with all of our researching and talking and thinking and socializing!

October 17, 2013
Christian Charm Course: How Feminine Are You?
Next Post 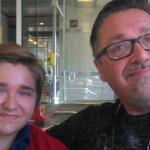