Doug Phillips’ Get Out of Jail Free Card

There is little that bothers me more than the excuse-making that comes out in full force every time a Christian leader is found engaging in some form of moral wrongdoing. You see, so long as that Christian leader says “I’m sorry” properly, they’re apparently immune from any form of criticism, whether now or in the future. In the wake of Doug Phillips’ resignation, I have seen literally dozens of comments across the blogosphere in which individuals have praised Phillips and denounced bloggers who dare to take him to task or even talk about it. Because apparently it is the bloggers who want to ensure that Phillips is now held accountable, or to point out that Phillips’ affair puts lie to the ideology he peddled, that are the bad guys here, not the man who deceived and cheated on his wife. Can you say misplaced priorities?

Over a year ago, I blogged about Voice of the Martyrs president Tom White, who committed suicide after allegations that he had sexually molested a ten year old girl came to light. Over the following weeks I had an outpouring of accuses and anger directed at me rather than the accused child molester. I blogged twice in response, carefully categorizing and labeling the excuses that poured forth from the fingers of indignant Christians.

The most common excuses included “let him who is without sin cast the stone,” “judge not lest you be judged.” and “we are all sinners.” Other excuses include the argument that the issue should be handled privately and not talked about publicly, and that the proper response is not any form of criticism or questions about how this could have happened but simply prayer for the sinner (no mention of prayer for victims, of course). The remaining excuses both fall especially hard on victims, including both the idea that a molested child or rape victim must have been “asking for it” and the idea that the proper response to sin and repentance is to “forgive and forget.”

These excuses aren’t just made for child molesters, they’re made any time a Christian leader is caught in some form wrongdoing. I have seen every one of these thrown out in defense of Doug Phillips in the last week. Every single one. The problem with these excuses is that they serve to get the wrongdoer off the hook for actually atoning for what happened or doing things differently in the future and minimize the importance of protecting present or future victims. Heather Doney of Becoming Worldly addressed some of this yesterday:

1.) Forgiveness is not a voluntary thing. When it’s requested it is mandatory – you must forgive or your heart is seen as evil.

2.) Like in the military, shit rolls downhill. Leaders are always entitled to more forgiveness and less formal punishment than followers for similar infractions.

3.) The separatist mindset is based on the idea that bad stuff creeps in from outside. So if a leader does something seen as very sinful it’s a sign that sin from the evil, Godless outside world has gotten in, not that their system or the person they put their faith in has its own brand of built-in awfulness. So as backwards as it might seem, the more awful stuff their leaders do, the more its a sign that the outside world is messed up.

4.) The “outside world” is always seen and described as being much much worse as far as crime and pain and sickness than what they have in their “bible believing” community, even when normal metrics indicate it isn’t or might in fact be considerably less violent/miserable/impoverished/stifling than whatever they have occurring within.

Believe it or not, I’ve seen these toxic ideas about repentance and forgiveness as they relate to Christian leadership result in churches putting child molesters or rapists back in positions of authority. I’ve seen these ideas used to shut off any future discussion of what happened, or any future desire to be wary of the offending party. In many conservative Christian circles, repentance actually serves as a get out of jail free card, allowing the offender to duck any real or lasting consequences of their actions, to the detriment of those around them.

With that all out of the way, I thought I’d take a moment to offer some examples from this past week, gleaned from the comments on a several different blogs. 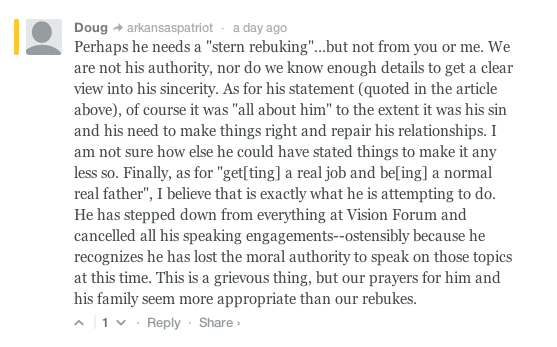 The only people allowed to speak on this matter, it seems, are those who serve as Doug Phillip’s authority. Which are who exactly? Well, given that Doug has long been the de facto pastor at his church, which isn’t part of a larger denomination, that would be exactly . . . no one. Except God that is.  Handy for silencing dissent, that.

Because an adulterous husband and father is totally the one who should be caring for his family’s spiritual and emotional needs. Oh and look! Apparently Julie Anne and others bringing attention to Doug Phillips’ resignation is just as bad as Doug Phillips going behind his wife’s back and cheating on her! 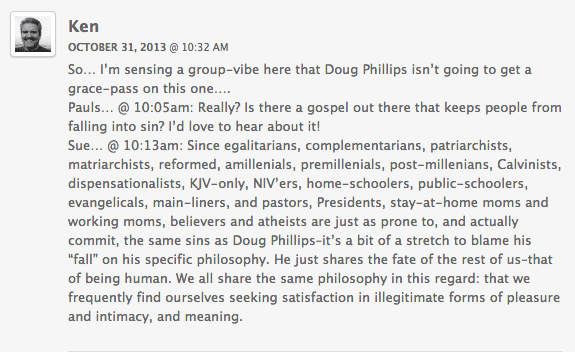 Doug Phillips cheated on his wife? So what! He’s just doing what we all “frequently find ourselves” doing! Given the framing of that last bit, I’m pretty sure Ken is arguing that what Phillips did is no different from dating around or hooking up. Because conservatives don’t understand consent, remember. 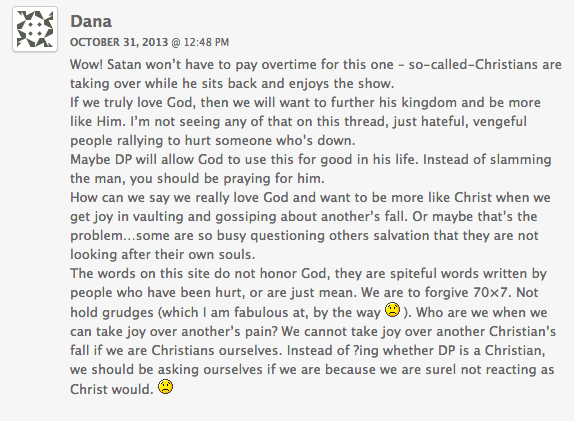 Also, not the phrasing—Julie Anne is a “so-called” Christian. Nice.

Doug Phillips went behind his wife’s back and cheated on her? Oh well, he’s just the same as the rest of us then. Except that most of us don’t go behind our spouses’ backs and cheat on them—but who needs details? 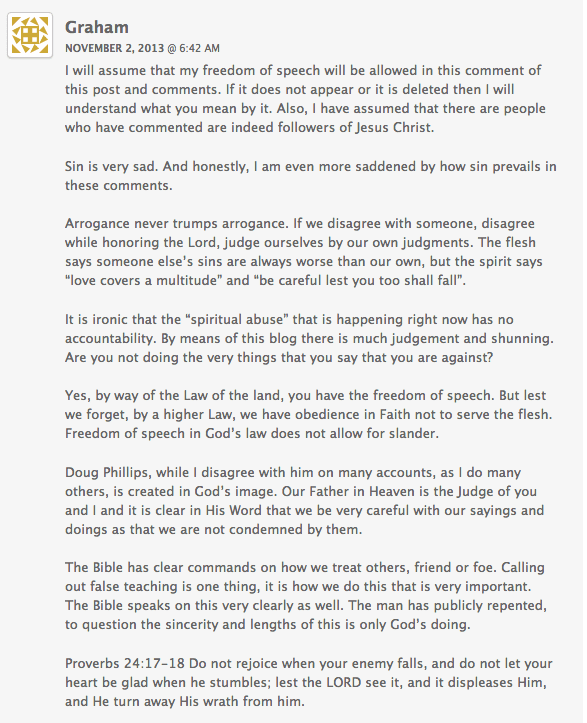 Because every time a man publicly repents we should accept it without question. Just as so many people accepted Phillips’ teachings on proper family living . . . the whole time he was cheating on his wife. Right. That totally makes sense.

I am so freaking tired of the excuses.

Doug Phillips made a name for himself telling other Christians what to do. A lot of people listened to him, trusting him as a Christian leader who was close to God. The cornerstone of the dogma Phillips taught was what he termed “biblical patriarchy”—the idea that women are more spiritually and emotionally vulnerable than men and that every woman must therefore be under the authority and protection of a male head from her infancy through her old age. This system was enshrined in the patriarchal family, where the man was the head of the wife and children, who were bound by God’s command to submit to him and obey his dictates. If you think I’m making this up, read Vision Forum Ministries’ Tenets of Biblical Patriarchy.

The point I’m making here is that Phillips entire ideology is based on the idea that it is the head of the household and the head of the household alone who can be trusted for spiritual and emotional protection from the outside world. Doug Phillips’ affair matters because it reveals that everything he taught was based on a lie. We can’t shut up and stop talking about this. We have to talk about this.

November 6, 2013
CTNAHM: How to Mold Your Wife to Bless Your Need
Next Post