You Couldn’t Possibly Have Been Homeschooled

You Couldn’t Possibly Have Been Homeschooled January 20, 2014 Libby Anne

I wrote last week about House Joint Resolution no. 92 in Virginia. This resolution would call for a study of Virginia’s religious exemption, which allows parents to homeschool without being subject to the state’s homeschool oversight or requirements. As written, the law requires that both parent and child have a religious objection to school attendance in order to be granted an exemption. In practice, as highlighted by a Washington Post article on formerly homeschooled student Josh Powell, it appears that many districts do not ask the child’s beliefs or desires when granting the exemption. This was the impetus for Delegate Rust’s proposal of HJ 92.

If you want to support HJ 92, you can sign the change.org petition, which includes phone numbers and talking points. You can also read more about it in the Coalition for Responsible Home Education’s release, Virginia: House Joint Resolution no. 92. But my focus here is not so much on that resolution as on something that resolution has brought to the fore. Namely, there has been some activity on Delegate Rust’s facebook page related to HJ 92, and a conversation there has highlighted an ongoing problem I and other homeschool alums face when we engage in activism in favor of basic oversight and accountability for homeschooling. The conversation started with homeschool parents asking Rust to withdraw HJ 92. 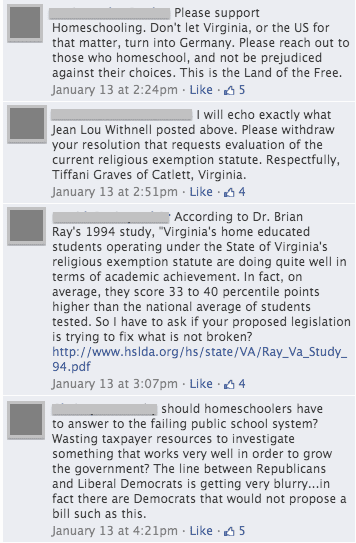 But soon, the comments changed as homeschool alums entered the conversation in support of HJ 92. Some of the names were ones I knew, those of fellow bloggers or individuals who have had their stories told in news articles on the problems of abuse and neglect in homeschool settings or on the growing activism of young adults who were formerly homeschooled. 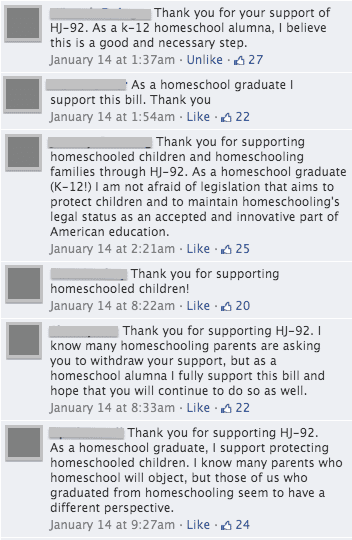 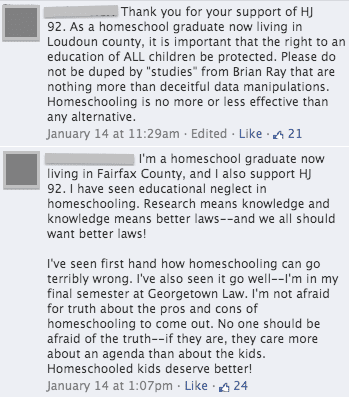 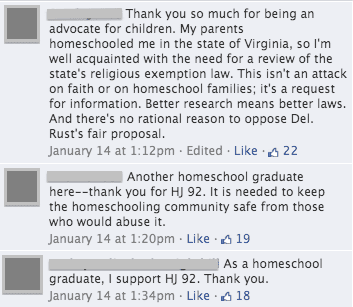 Here is how the homeschool parents commenting on this thread responded: 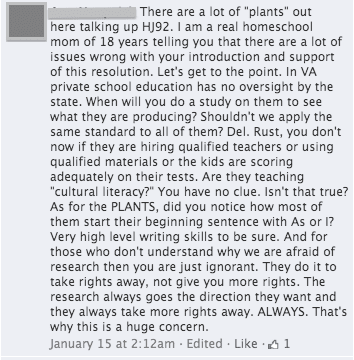 By and large, these homeschool alums are not anti-homeschooling. Instead, they are speaking from their experiences and the experiences of others to call for reform to support the wellbeing and interests of current and future homeschooled students. This is something new. The common narrative I have seen among HSLDA affiliated homeschool parents is that those who favor oversight of homeschooling are, at core, simply upset that homeschool parents are able to remove their children from the cultural “brainwashing” of public schools. And extreme phrasing aside, there may be some educators or academics who do take this position. But this is not the position of homeschool alums engaged in recent activism, and I think this is confusing to homeschool parents, especially those in HSLDA’s orbit. What they’re seeing here is new, and it doesn’t fit their current narratives. And that’s confusing.

January 19, 2014
Oscar Nominated "Alone But Not Alone": A Product of the Doug Phillips / Michael Farris Empire
Next Post