This past Sunday, before the New Republic article about the mishandling of sexual assault at Patrick Henry College, Michael Farris issued a statement on his facebook page. It was not about the upcoming article but rather a response to the growing Bill Gothard scandal, which has followed close on the heels of the Doug Phillips scandal. 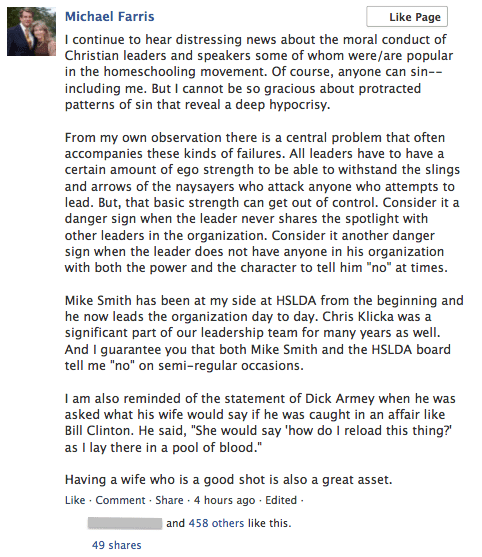 Even in this statement calling out their failings Farris does not name Gothard or Phillips. Indeed, some commenters (presumably homeschool parents) asked him who he was talking about, so they could be on the lookout. To my knowledge, he did not reply. I suspect Farris still will not call them out by name for fear of homeschool parents canceling HSLDA memberships. It’s fairly clear he has had his concerns for some time—and has done nothing.

Farris and HSLDA have had connections to Bill Gothard and Doug Phillips from the beginning. Ryan Stollar details some of those connections here. When Gothard founded Oak Brook College of Law, Gothard was the chancellor and Farris was on the board of trustees. Today, many of HSLDA’s lawyers are graduates of Oak Brook. Phillips got his start as a lawyer for HSLDA, and the two organizations often went in together on various promotions (i.e., receiving a Vision Forum coupon when signing up for HSLDA membership). These men moved in the same circles and were funded by the same philanthropists.

Through this unwillingness to call out other homeschool leaders and his ardent promotion of family sovereignty, Farris contributed to the culture that allowed these abuses to take place. His response to these scandals, rather than addressing this problem head on, is to focus on covering for himself. He appears to call out Gothard and Phillips (although not by name) in order to elevate himself rather than in an effort to provide help for victims or address core cultural problems.

But I promised you Farris’s response to the New Republic article, didn’t I?

After the article came out yesterday, several former homeschooled students posted the link on the thread of Farris’s above statement, asking why Farris had not said “no” to Corbitt, the main villain of the piece, and asking why he was willing to criticize others but unwilling to address the problems in his own backyard. Farris responded by deleting the comments from the thread. When the link was posted again with more questions, ultimately Farris deleted the entire thread, including his original statement.

With the statement and thread deleted, a former homeschooled student posted her concerns as a comment on his facebook wall, along with a link. Then and only then, finally, Farris responded. 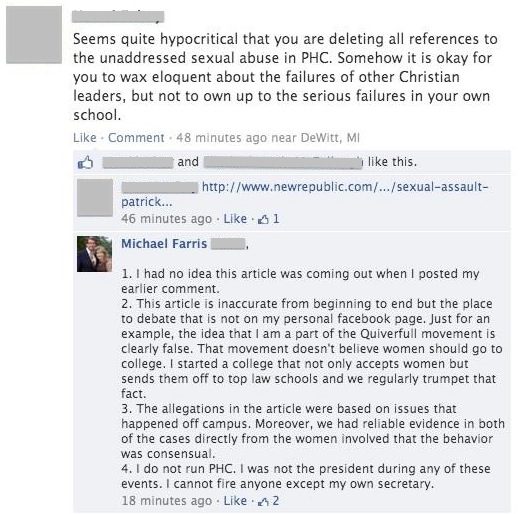 Some time soon after posting this, Farris realized it was probably unwise and would look bad, so he deleted both his comment and the former homeschooled student’s post. And he was right—it does look bad.

Farris needs to stop being defensive and start fixing things. He needs to call out abusive or extremist homeschooling leaders, and with the intent of protecting people in the future and aiding current victims rather than the intent of elevating himself. He needs to conduct an investigation into his school’s sexual assault policies, and should preferably hire an independent investigator such as GRACE. We don’t need excuses. We need change.

A Point by Point Response

Farris’s four points are worth addressing, if only for the problems they reveal.

1. I had no idea this article was coming out when I posted my original comment.

Does Farris mean he wouldn’t have posted cryptically about the failings of others, while holding himself up as a model, if he had known that the New Republic article was about to be published? Because unless that is what he means, the timing of his post is irrelevant. Actually relevant is that he felt he could talk about how others have problems and he doesn’t even as his own college has been seriously mishandling cases of sexual assault. Don’t dish out what you’re not willing to take yourself.

2. This article is inaccurate from beginning to end but the place to debate that is not my personal facebook page. Just for an example, the idea that I am part of the Quiverfull movement is clearly false. That movement doesn’t believe women should go to college. I started a college that not only accepts women but sends them off to top law schools and we regularly trumpet that fact.

While most of those in the quiverfull movement also practice biblical patriarchy, the two ideologies are not identical. Quiverfull means eschewing birth control and instead letting God control your fertility. Biblical patriarchy means the idea that the wife must submit to and obey her husband, and is often accompanied by the idea that daughters, too, are under their father’s authority, and the idea that women should not work outside the home, particularly once married.

Vickie Farris wrote in A Mom Just Like You about giving up birth control, and becoming convincted that Christians should let God control their fertility. Indeed, Michael and Vickie ultimately had ten children. In The Spiritual Power of a Mother, Michael wrote that wives must submit to their husbands warned against “attempting to do your husband’s job of leading the home” because “if you try, you are probably interfering with God’s pressure on your husband to urge him to do the right thing.” He even wrote that a wife should not take their children to church or play their children sermon tapes if her husband forbids her. In What a Daughter Needs from Her Dad, Michael wrote that daughters should be encouraged to attend college and that unmarried adult daughters should not be expected to remain in the home, but also that “if you push your daughter toward a career as her first priority, she may have a difficult time embracing motherhood” and that “we encourage our girls to look at careers that can be found part-time from home while they are being loving full-time moms.”

Yes, Michael is not as deep into patriarchy as Doug Phillips or Bill Gothard. But that does not mean Michael is an egalitarian. He is not. This is a case of saying “I’m not as bad as they are, so I’m totally fine! Why are you pointing at me?!” Yes, Michael did start a college that accepts women and has sent some female graduates to law school, but he also believes women’s primary role is in the home and that wives are commanded by God to submit to their husbands in all things—and whether he likes the term or not, he and Vickie are quiverfull.

3. The allegations in the article were based on issues that happened off campus. Moreover, we had reliable evidence in both of the cases directly from the women involved that the behavior was consensual.

Farris clearly does not understand the dynamics at work behind rape and sexual assault, especially in an environment characterized by an emphasis on purity and a propensity toward slut shaming. And if what he says is true, why have so many victims come forward to talk about what happened and criticize the administration’s handling? Indeed, if it was consensual why did they go to the administration in the first place?

That the events occurred between students off campus is irrelevant. For one thing, such an incident would require college action in order to protect the safety of the victim, who would be attending classes with and living near her assailant. Furthermore, the administration did get involved in these cases, to the extent of telling the victims not to go to the police, so whether the assault happened on or off campus is irrelevant.

Claire authorized PHC to release the records from her case, but the school chose not to. “We view these experiences as worthy of privacy, even if at this particular juncture in their lives they may have a different view,” PHC wrote in a statement.

Citing student privacy, the college would not comment on many of the particulars of Sarah Patten’s (who asked to be identified by her maiden name) or Claire Spear’s accounts, or the incidents involving the other students who asked not to be named.

4. I do not run PHC. I was not the president during any of these events. I cannot fire anyone except my own secretary.

Farris founded Patrick Henry College and is currently the school’s chancellor. He has a great deal of influence there and is lying to himself if he thinks he doesn’t.