They called it “adultery” and made her confess

I have been reading about child sexual abuse perpetrated in the 1980s by Donn Ketcham, a missionary doctor in Bangladesh. The abuse came to light when one of his victims, a 14-year-old missionary kid, returned to the United States to visit relatives. While there, she told the pastor of her home church about her abuse. Her pastor interrogated her to ensure that she was being truthful and then handed her over to Russ Lloyd and Russ Ebersole, the first a Christian counselor and the second Donn Ketcham’s boss through his missions agency, ABWE.

Unbeknownst to ABWE, Donn Ketcham, who was pushing 60 and had been on the mission field for decades, was a serial adulterer—and also a serial child molester. Lloyd and Ebersole then took the girl back to Bangladesh where the confronted Ketcham and informed the girl’s parents of what had happened. Donn confessed to a string of affairs, all of which were chalked up to “adultery.” Donn did not tell Lloyd or Ebersole that the 14-year-old was not the first child he had molested, but that might not have made any difference to the way they were interpreting Don’s transgressions—it was adultery, they concluded. Lloyd and Ebersole then made both the girl and Donn sign confessions.

Here is the 14-year-old girl’s confession: 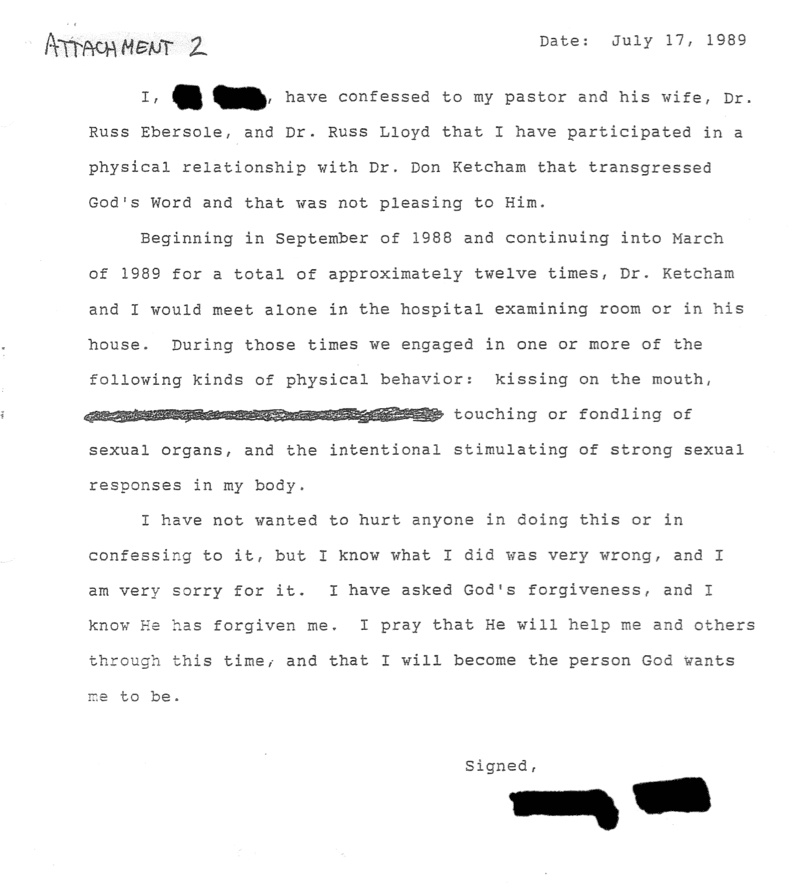 And here is Donn Ketcham’s confession: 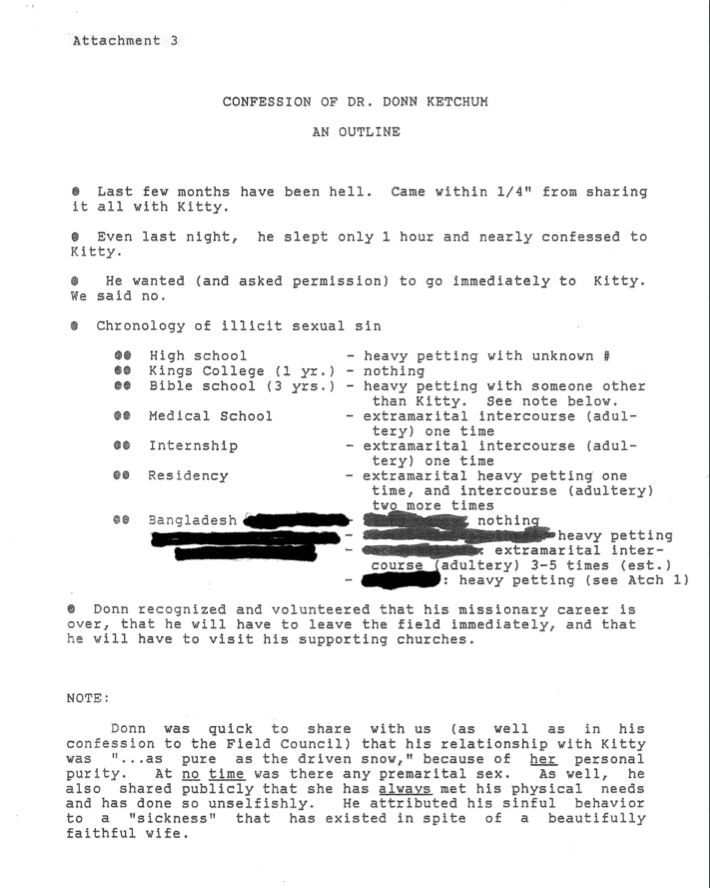 Notice anything? They call it adultery and treat the girl as just as guilty as her abuser. When Donn Ketcham began sexually abusing the girl, he was pushing 60 and she was 12. And they call it adultery. That was the problem—Donn Ketcham, missionary doctor, had an affair with a 12-year-old girl.

You can read Lloyd’s diary, detailing the revelation, investigations, and confession.

There is something perverse about treating adultery and child molestation as the same offense. Adultery is wrong because it is the breaking of a contract, and results in harm to the non-offending spouse. Child molestation is wrong because it, like rape, involves sexual activity without consent. The two are completely different, and to suggest that a 14-year-old girl was responsible for her own abuse is utterly reprehensible. The agony this girl was put through is heart rending. Rather than being offered help and care as a victim, she was treated as a guilty fellow perpetrator—in her own abuse.

I’ve heard of this sort of thing happening before. Tina Anderson was only 15 in 1997 when she was raped and impregnated by an elder at her church. When her pastor found out what had happened, Tina was forced to stand before the congregation and confess to the sin of sexual immorality, as a guilty party in what was actually her rape. Tina was then sent out of the state to have her baby, whom she was forced to give up for adoption. Thirteen years later, Tina came forward with what had happened, went to court against her rapist, and put him behind bars.

In the last couple of years, more people have begun poking into just what happened in Bangladesh in the 1980s. In the face of rising questions, ABWE hired GRACE (Godly Response to Abuse in the Christian Environment) to investigate and write a report. Information has been leaking out on a number of blogs run by former missionary kids focusing on Donn Ketcham’s abuse. It appears that Donn Ketcham sexually molested numerous other children during his tenure as missionary doctor in Bangladesh. When they sent him home in 1989, ABWE did not investigate to see if Donn had been molesting any of the other missionary kids living at the mission, apparently assuming that the issue was simply one of adultery, and not serial child molestation. It has also come out that there were additional missionaries involved in the abuse—and that the original 14-year-old girl told ABWE of another missionary of molesting her, but was coerced into recanting her accusation. That missionary had been accused of molestation by two others, years earlier, and the accusations had been overlooked then as well.

GRACE has since been fired by ABWE. While ABWE claims it is not trying to hide anything, it seems likely that GRACE uncovered additional things about the abuse and ABWE’s handling of it that ABWE did not want made public, and that ABWE wanted more control over the end results of the investigation than GRACE was giving them. Given how badly they handled the original victim’s case, I can’t say that I’m surprised.