I have written time and again about the evangelical narratives used to excuse rape and child molestations, especially when committed by pastors. I came upon quite a few of these when reading through the comments on the recent article by a convicted rapist and child molester that was published by Christianity Today’s Leadership Journal. (If you haven’t read about the article yet, please do.) I want to take a moment to look at a few of the excuses I am seeing made, and to reflect on what these excuses mean.

This poor man needs love…not hate. These comments make me sick to my stomach and it’s the EXACT reason why someone doesn’t admit to their struggles when they first arise… NO ONE is above ANY SIN. Satan doesn’t play fair. Ya, this guy may have problems. So do I. So do YOU. No wonder he’s anonymous.

The evangelical idea that the devil prowls around actively trying to deceive people and force them into sin in practice removes some of the responsibility from the guilty party himself. Oh yes, evangelicals will say that the offender is still responsible, because he gave into “temptation” rather than resisting it (as though he is a passive party rather than an active one). But then, when a leader falls I’ve heard evangelicals say that it is unfortunate but not surprising, because Satan exerts extra effort to lead leaders into sin. Again, this is taking some of the responsibility off of the offender.

2. It Could Have Been Any One of Us

This one really ought to be applied to the victim—any one of us could have been the one suffering at that man’s hand—rather than to the offender. But no.

I am really thankful CT chose to publish this article. After reading it I scrolled down to see if I could find the author’s information so I could write him a note of encouragement; after reading the comments, I recognize his wisdom in choosing not to disclose anything about himself to us. There is no excuse for what he did. There just isn’t. Nevertheless, every single one of us is capable of this, but the vast majority of us don’t believe we are. I’m sure that the author didn’t think he was capable of this either, and that’s what should make us take a closer look at our own self-righteous hearts. “Wicked progeny considers itself righteous, but forgot to wash it’s anus” (Proverbs 30:12; a literal translation).

This commenter not only states that any one of us is capable of raping a minor but also that those of us most critical of this child rapist need to take a look at ourselves—because we ourselves are wicked. This rhetoric diminishes the seriousness of the offense and deflects the focus from the offender. It is not true that it could have been any of us—most of us would never dream of raping a minor, and we certainly wouldn’t spend years grooming and preying on a minor. We are not all potential child rapists simply waiting for a moment of weakness, and not all moral failings are the same. What this man did was worse than what many others have done.

Frankly, this one is a bit new to me, but I’m not surprised by it.

It’s easy to throw rocks at someone if you’ve never been there. It would seem we would throw him under the bus because of the nature of the sin/crime. I would suggest to you categorizing someone who sins on a ‘rating scale’ such as ‘well, he is a child predator’ after the man REPENTS shows why the church is in such dis-respect. Paul says in Corinthians that it is the churches responsibility to help some one back on their feet lest he become overwhelmed with his sin. I would suggest we welcome a man that has repented of such a horrendous sin with open arms instead of driving him into the dirt! 2 Corinthians 2:7 (NASB) so that on the contrary you should rather forgive and comfort him, otherwise such a one might be overwhelmed by excessive sorrow.

In other words, if we judge child rapists and sexual predators too harshly we risk driving them from the church. Instead, we need to put on our nicey nice gloves and accept them back with open arms at the first sign of repentance (even “repentance” that is filled with excuse-making and minimizing of the crime committed). This once again moves the focus away from helping the victim and ensuring that there are no future victims. Instead, the focus is on protecting the soul of the offender. I mean, did the victim just disappear? Does she not matter? Misplaced priorities much?

Here is what happened when blogger Becca Rose, a victim of abuse at the hands of her pastor-father—abuse the church overlooked and failed to protect her from—tweeted a question to the editor who published the piece:

In other words, Dyck doesn’t see the problem with publishing the piece. Rather than actually responding to Becca Rose’s question, he simply dismisses her concerns. Later, The Irish Atheist had this exchange with Dyke: 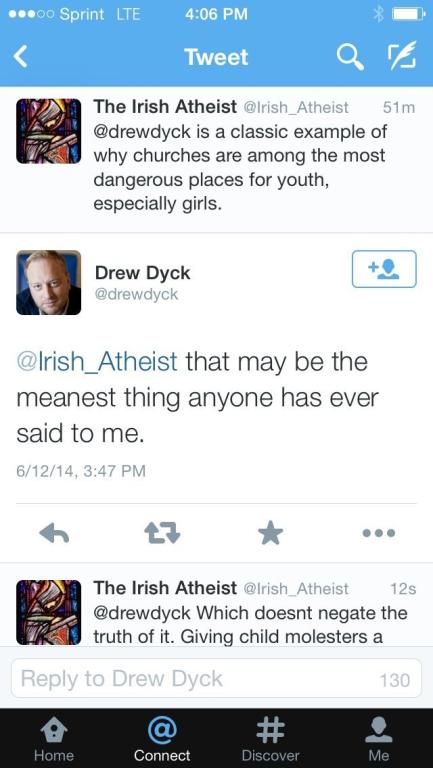 Sometimes I wonder if it’s even worth trying. Evangelicals like Dyke appear to be completely unwilling to examine the way their rhetoric and narratives serve to minimize and excuse abuse. Frankly, it’s frustrating. I see these narratives and this rhetoric used time and again in defense of sexual predators—usually pastors—without any sense of awareness of why people like me turn around and call out evangelical culture for being an unsafe place.

If you don’t like being told that your culture is an unsafe place for women and girls (among others), fix your damn culture already.