On Sam Harris, Pregnancy, and Sacrifices

Last week an article in the Washington Post quoted prominent atheist author and speaker Sam Harris’s explanation for why his audience is primarily male—women, he said, have an “estrogen vibe” that makes them less interested in the “critical posture” he takes in his writing. When female atheists responded critically to his comments, Harris wrote a post explaining what he’d meant—and digging his hole deeper. I addressed Harris’s comment in a recent post, “Is Same Harris Sexist?”

Yesterday atheist Dan Arel retweeted my post on Sam Harris, and Sam Harris tweeted back. You can see the exchange here (or by clicking here): 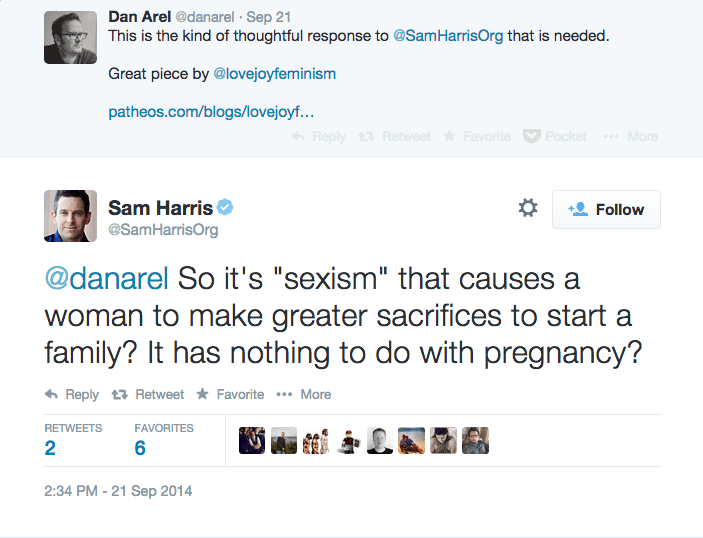 Here is the exchange in text:

Dan Arel: This is the kind of thoughtful response to @SamHarrisOrg that is needed. Great piece by @lovejoyfeminism
http://www.patheos.com/blogs/lovejoyfeminism/2014/09/is-sam-harris-sexist.html

Sam Harris: @danarel So it’s “sexism” that causes a woman to make greater sacrifices to start a family? It has nothing to do with pregnancy?

At issue here appears to be whether the disproportionate sacrifices mothers make to raise their children are the result of biology or sexism. Before we get into the meat of this, let me point to the relevant sections of both Harris’s post and my analysis.

I am well aware that sexism and misogyny are problems in our society. However, they are not the only factors that explain differences in social status between men and women. For instance, only 5 percent of Fortune 500 companies are run by women. How much of this is the result of sexism? How much is due to the disproportionate (and heroic) sacrifices women make in their 20’s or 30’s to have families? How much is explained by normally distributed psychological differences between the sexes? I have no idea, but I am confident that each of these factors plays a role. Anyone who thinks disparities of this kind must be entirely a product of sexism hasn’t thought about these issues very deeply.

I didn’t go into more detail because I was attempting to make a call for learning more about what sexism is and how it affects women, not to spend my entire post explaining things so many women have already written about. But now, let’s actually discuss it.

Now first off, Harris was a bit misleading in his tweet. There he referenced the “greater sacrifices” a woman makes “to start a family” when in his post he referenced “the disproportionate (and heroic) sacrifices women make in their 20’s or 30’s to have families,” not to start families. In other words, he moved the goalposts to make his position easier to defend. By moving the goalposts, he could point at the fact that it’s women who get pregnant and then act like I’m an idiot for not knowing that. Great. Like I didn’t feel marginalized by movement atheism enough already.

But more than that, with his tweet Harris makes it clear that he really doesn’t know what sexism is—and doesn’t care to know. So let me take some time to explain just what makes Harris’s statements sexist.

First let’s start with pregnancy. In his tweet, Harris suggested that pregnancy “causes a woman to make greater sacrifices to start a family.” Remember that Harris made his original reference to these “disproportionate sacrifices” to explain why only 5% of Fortune 500 companies are run by women. This credits an incredible amount to pregnancy, especially when a large percentage of women never have children and pregnancy only takes nine months.

I would assume that Harris knows these things, but pregnancy does not tend to prevent women from working, employers are legally required to offer paternity leave alongside maternity leave, and firing a woman who becomes pregnant is illegal. I sincerely doubt Harris actually thinks that pregnancy itself keeps women from becoming Fortune 500 CEOs, but in crediting the disparity to “women’s sacrifices” and crediting those sacrifices to “pregnancy,” that is what he appears to be suggesting. Look, I’ve been pregnant twice. Neither pregnancy got in the way of my career in any way. There was a time when pregnancy could get a woman automatically fired, but we’ve moved past that (legally, at least—enforcement is not always perfect). The idea that pregnancy would result in only 5% of Fortune 500 CEOs being women is absurd.

When Harris talks about women’s sacrifices, he can’t be talking only about pregnancy pregnancy. But outside of pregnancy, there is no aspect of childrearing that has to be done by a mother rather than a father. You don’t have to have two X chromosomes to read to your children, to care for them when they’re sick, or to drive them to school. Formula enables fathers to feed their babies, and even breastfeeding mothers can pump while at work. There is no biological reason men and women cannot share the responsibility of childrearing. What, then, is Harris talking about?

Despite the appeal to biology in Harris’s more recent tweet, I suspect that in his original post Harris meant to refer to voluntary sacrifices. After all, he alleged that women were more nurturing then men and then later spoke of “the disproportionate (and heroic) sacrifices women make in their 20’s or 30’s to have families.” So let’s talk about these “voluntary” sacrifices.

There is in our culture a general assumption that women will make sacrifices for their families in a way men won’t. Now it’s true that being a mother often demands sacrifice. There are plenty of times I put aside work to spend time with my children, and I’m happy to do so—I find time spent with my children rewarding and value building relationships. Just the other day I was talking about this with a colleague who empathized and spoke about also setting aside career-advancing work to spend time on the weekends with his children—wait, did I say his? Yes, yes I did. It turns out families frequently involve two parents—and it turns out that being a father can involve sacrifice too.

Harris might know this if he spent more time talking to young mothers, but it’s very common for women to become stay-at-home mothers because they can’t afford to work and pay for their children’s childcare—and because as women, it is expected that they, and not their husbands, will be the ones to drop out of the workforce to care for their children. In other words, many women are forced to give up paid work to stay at home with their children. They haven’t volunteered to make sacrifices Harris calls “heroic,” they were drafted. Why does this happen? Because in spite of all the changes brought by the various women’s movements over the past several hundred years, we have yet to shake off the legacy of patriarchy. We could improve this situation by making childcare more affordable and improving women’s career and employment options, among other things.

Of course, the expectation that women will make sacrifices for their families actively contributes to the glass ceiling women often find themselves facing. After all, these sorts of assumptions mean that women may be seen as a risky hire. After all, women may need maternity leave, quit to stay home with their children, or put in fewer hours to meet the demands of childcare and housework. In other words, regardless of what women actually do, assumptions about what they they will do may limit their career aspirations and employment chances. Just ask Kim O’Grady, whose job search looked up only after he added “Mr.” to his resume. (Click here for a similar study.) Whether Sam Harris realizes it or not, this assumption that women will make disproportionate sacrifices for their families—that this is only natural and how things are meant to be because biology—contributes to the glass ceiling.

Let’s touch on one last thing. Could it be that women are biologically more nurturing? Could there be something about women’s biology makes them more willing to make sacrifices for their children? There is a lot of research to suggest otherwise. This research reaches back at least to Margaret Mead, who argued that, far from being innate, gender characteristics varied widely between societies. We know that there are some cultures where the men raise the children. We know, too, that other things often thought biological are in fact shaped by culture—five hundred years ago, for example, women were considered the especially sexual sex. In other words, it appears that gender characteristics are more shaped than innate.

This gets to one of my biggest problems with Harris’s recent statements: He makes statements about current gender roles (and perceived gender characteristics) as though they are natural and not worth questioning or changing. He states that women are more nurturing as though it is self-evident. Further, he states that women make disproportionate sacrifices for their families without asking why they do so—or whether it is good that they, but not male counterparts, make these sacrifices. Harris needs to realize this subject isn’t his forte and stop, listen, and learn.

As I mentioned in my earlier post, Merriam-Webster offers two definitions for sexism:

I included this in my earlier post, which means Harris presumably read it, but he doesn’t appear to have been listening to understand. This is unfortunate, given his portrayal of himself as rational and willing to change his mind, unlike others.

Frankly, I don’t see much difference at all between Harris and the evangelicals I grew up among, at least on gender issues—and willingness to examine one’s biases or be self reflective. I was told growing up that it is women’s role, as determined by their biology, to make sacrifices their families—and that women should be honored as the glue that holds their homes together. And here Harris is, saying the same thing.

September 22, 2014
Do They Care about Women, or Simply Bashing Religion?
Next Post