What Ebola Tells Us about Ourselves

What Ebola Tells Us about Ourselves October 14, 2014 Libby Anne

I remember having conversations about ebola while it was still “safely” in West Africa. I remember reading that part of the problem in West Africa was that many people had become convinced that ebola was a government hoax, and that among some there was a distrust of “western” medicine. We wouldn’t have to worry about ebola if it came to the U.S., others assured me, because we wouldn’t have these problems, and ebola would be quickly contained.

Now granted, there are other differences—we have a better healthcare system, we haven’t been wracked with war in the near past, and so forth—and it is indeed unlikely that ebola will spread in the U.S. beyond quickly isolated cases. But with actual cases of ebola in the U.S. now, I’ve been struck by how much less difference there is, really, between Americans and West Africans than I’d been given to think.

First, here are some headlines regarding the outbreak in West Africa:

So now that there is ebola in the U.S., what do we have? Oh right. This:

Conservative icon: Obama wants Americans to die from Ebola in order to make US more like Africa

Rush Limbaugh: Obama Wants Americans To Get Ebola As Payback For Slavery

Laurie Roth: Obama Allowing ISIS To Send Ebola Patients To US So He Can Use Fake Vaccines To Track People

I have friends with facebook feeds full of assertions that ebola is a government population control plan. And then there are the ebola truthers, and the people trying to treat ebola with homeopathy, or with titles like “The Five Biggest Lies about Ebola Being Pushed by the Government and Mass Media.” And then of course there’s this gem. I’ve spent some time looking around various corners of facebook, and I’ve seen a lot. The CDC is lying, hiding things, and not to be trusted. Ebola could be treated with essential oils, but the government is suppressing this option. You name it, I’ve heard it.

We may be more prepared to handle ebola than Liberia and Sierra Leone, but we don’t seem to be any more immune to conspiracy theories—or distrust of modern medicine or government—than they are.

I’m also finding it more than a little hypocritical that conservatives are now all over Obama arguing he didn’t do enough about ebola fast enough, as though they’ve forgotten their harsh criticism of his decision to finally do something only a month ago. That’s right, I remember conservatives arguing that the real threat to America was Isis, not some “disease in West Africa.” Let the Africans take care of Africa! It’s funny how quickly that tune changed when ebola made an appearance in the U.S. Actually, it’s not funny, it’s sad—profoundly sad.

We live in a crazy, messed up world, my friends. 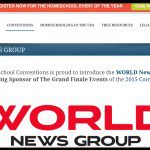