In Which Sally Goes to School

As many of you know, Sally started kindergarten this fall. I’ve blogged before about my school phobia and some fears surrounding sending my daughter to public school after being homeschooled from kindergarten through high school myself, but most of those hangups dissipated before the time came for me to actually put her on the school bus and send her off to school. Mostly I was just excited for her—and boy was she excited herself! I watched her as she boarded the bus, turning back with excitement to smile and wave. It was weird, though, to watch her having an experience I never had.

There is one result of sending Sally off to public school that surprised me: I feel like I understand my mother and her choices better. During the hours between when I put my daughter on the bus and when I welcome her home in the afternoon, I do not control what happens to her. Somehow daycare and preschool felt different. The kids just played, and the center was small. Sally’s teacher has made efforts to send home information on what she and her classmates are studying and how they are learning, but it still feels very out of my hands in some way.

My mother homeschooled my siblings and I in part because they believed the public schools would actively undermine the conservative evangelical values they were seeking to instill in us. While I have come to believe that most of these fears are more imaginary than real—and also that sheltering children from alternative viewpoints is not an effective way to teach them your own values—I feel now like I better understand where they were coming from. If I believed that Sally’s school was actively undermining the values I am trying to teach her, I would likely explore other educational options too.

My parents used to say that we children belonged to them, not to the public schools. I understand the sentiment, but I think the lens is off. Sally doesn’t belong to me—or to her public school. Yes, I’m supposed to be her advocate, guide, and cheerleader, and yes, her school is supposed to educate her and help her learn to be a part of a larger community. But ultimately, I don’t own Sally, and neither does her school. Sally owns herself.

One of the things I found frustrating during the first weeks of school was Sally’s unwillingness to answer my questions about her day. In retrospect I had too many questions, and she simply wanted some down time at home. “Stop asking questions!” she would say. Over time I found that if I stuck with a simple “How was your day?” and left it at that she would eventually volunteer some information. But I found it hard, somehow, to not know every detail about each of her days. But what I’ve realized is that it’s okay that I don’t know every little thing about what she does at school each day, because this is simply the beginning of a long process of letting go, as she develops her own friends, her own places, and her own world.

But religion wasn’t the only reason my mother homeschooled us, and I was reminded of that this fall as well. As school began, I watched various moms voice their concerns or pleas for help on a facebook group of local moms I’m a part of. Some mothers spoke of children afraid of long bus rides, others of concerns about their sons being bullied for their gender-neutral clothing choices or long hair. Some considered other education options, or even spoke of homeschooling. What I saw were moms like me, moms worried about their kids and wanting the best for them.

When Sally comes off of the school bus tired from a long day at school, I understand better the homeschooling mom who told me she chose to withdraw her daughter from school to homeschool her because their afternoons and evenings felt too rushed and included too many meltdowns.

But even as I feel that I better understand my mother’s motivations, there are other things I better understand as well. Sally’s school may be one of the poorest in the district, but that doesn’t detract from the sense of belonging it provides. Sally’s teacher is amazing and incredibly dedicated, and serves as a role model and cheerleader in Sally’s life. I feel a sense of community when I enter Sally’s school, and Sally feels happy and at home in her classroom and with her teacher and her classmates. I love that I am not the only one encouraging and supporting my child. I love being part of a school community.

Sally has a long way to go before she reaches graduation, but I think she is off to a good start—and so am I. 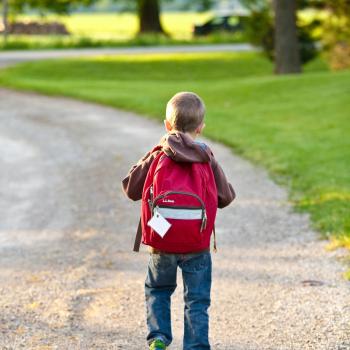