Like many other white evangelical children, I grew up singing this song:

I suspect it’s things like this that make it so hard for so many white evangelicals to really address race in this country—they think they’ve addressed it already. I mean after all, look at the lyrics to that common children’s song! And I mean, look at verses like this:

Galatians 3:28—There is neither Jew nor Gentile, neither slave nor free, nor is there male and female, for you are all one in Christ Jesus.

And look at all of the evangelical missionaries! If white evangelicals were racist, would they really be out there trying to convert the heathen of deepest darkest Africa?

Anyone who knows anything about the history of missions knows that white evangelicals have a long tradition of using missions to promote cultural supremacy. I have a lot of respect for people who go to other parts of the world to build wells or learn about other cultures by living among them, but white evangelical missionaries have long gone “into all the world” with the explicit purpose of tearing down other groups’ cultural customs and replacing them with white evangelical cultural customs. White evangelicals’ purported care for all the children of the world, “red brown yellow, black and white,” has long masked the fact that they see other cultures and other beliefs as dark and inferior.

Okay, next point. White evangelicals will often claim they do not see color—that they are colorblind. Yet in many ways, they have simply replaced the word color with culture. Let me explain what I mean. I grew up believing that black people were especially lazy, especially violent, and especially likely to be promiscuous or on drugs. But I wasn’t given the impression that these things were an inherent result of being black. Instead, the message I got was that they were a part of black culture, and that it was black culture that was the problem. It is this very logic that allows white evangelicals to look down on people of color and blame the tragic results of centuries of racism on people of color while at the same time denying that race is a factor. (Read more about this here.)

Of course, this last point is arguably common to political conservatism more generally. Perhaps that is a testament to how intertwined the two have become—in today’s world, to be a white evangelical is to be politically conservative.

But now, have a look at this for a moment: 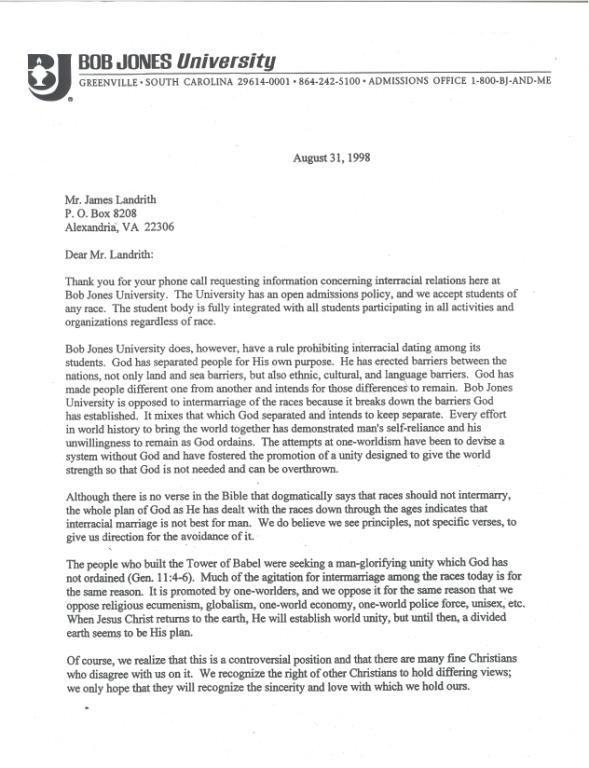 Thank you for your phone call requesting information concerning interracial relations here at Bob Jones University. The University has an open admissions policy, and we accept students of any race. The student body is fully integrated with all students participating in all activities and organizations regardless of race.

Bob Jones University does, however, have a rule prohibiting interracial dating among its students. God has separated people for His own purpose. He has erected barriers between the nations, not only land and sea barriers, but also ethnic, cultural, and language barriers. God has made people different one from another and intends for those differences to remain. Bob Jones University is opposed to intermarriage of the races because it breaks down the barriers God has established. It mixes that which God separated and intends to keep separate. Every effort in world history to bring the world together has demonstrated man’s self-reliance and his unwillingness to remain as God ordains. The attempts at one-worldism have been to devise a system without God and have fostered the promotion of a unity designed to give the world strength so that God is not needed and can be overthrown.

I don’t know how many white evangelicals opposed interracial marriage in 1998. I do know that 16% opposed it in 2012. As for my own upbringing, I suspect my father would have scrutinized a black suitor more than a white suitor, but if he had found a black suitor sufficiently godly, politically conservative, and a hard worker, I suspect my father would have accepted him—and that he would then have patted himself on the back and made good use of having a trump card against any claims of being racist.

I bring up Bob Jones University’s ban on interracial dating prior to the year 2000 as it is perhaps the most extreme example of ways white evangelicals can claim they are not racist while at the same time holding ideas that are very racist indeed. After all, Bob Jones University claimed they saw all people, regardless of color, as equal before God—at the same time that they also strongly opposed interracial dating.

So where does all of this leave us? I grew up in a white evangelical home, hearing of missions and of spiritual equality. In fact, my parents very obviously believed they were combatting racism in teaching my siblings and I that God loved all peoples, and when they valued missions work and spoke of converting the whole world. And yet. And yet. Even as they taught us these things, my parents spoke of the darkness of other cultures and religions around the world and the problems of black culture in our own country. They thought they were inoculating me against racism, but in practice they were teaching me racism.

And that, I think, just about sums up white evangelicals’ race problem.