Last week, conservative evangelical theologian John Piper tweeted something that went so far he ultimately had to delete it. Piper has gone pretty far before, such as when he tweeted verses from Job in response to a rash of deadly tornadoes, and then wrote a blog post describing the tornadoes as “the fingers of God” come down from heaven to punish a wicked people. This time, though, his foray was into what I call “purity culture,” which often devolves into rape culture and worse. 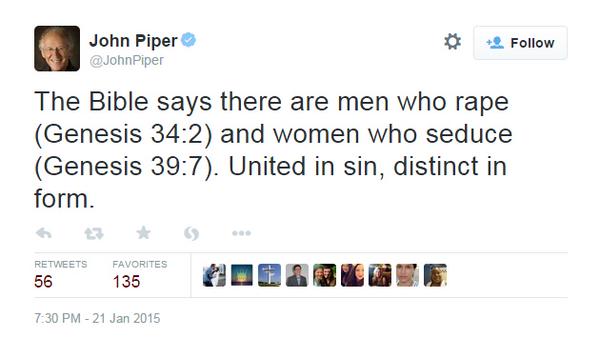 Make no mistake about it, Piper is equating men raping with women seducing. Same sin, different form. There are so many problems with this! Perhaps most prominently, a man can say “no” to seduction, but a woman cannot say “no” to rape. Giving in to seduction is voluntary. Rape? Not so voluntary. Given my own consent-based sexual ethics, I find it appalling that one could equate the two and treat them as the same sin. But then, Piper does not operate from consent-based sexual ethics.

From the conservative evangelical perspective, there are two kinds of sex: in marriage sex, which is good, and out of marriage sex, which is bad. I’ve described this in my “tale of two boxes.” Both rape and seduction (in Piper’s mind at least) involve sex outside of marriage, so both are wrong. (You may now be thinking “but wait—what about marital rape?” Congratulations! You’ve stumbled upon another problem with conservative evangelical sexual ethics!) I suspect Piper is equating the two because he seems them as both involving sex outside of marriage and some form of coercion—except that seduction is in fact nothing like rape. .

Let’s look for a moment at the verses Piper references:

When Shechem son of Hamor the Hivite, the ruler of that area, saw her, he took her and raped her.

And after a while his master’s wife took notice of Joseph and said, “Come to bed with me!”

Because raping someone is the same as asking someone to come to bed with you. Right. You see what I’m saying?

Of course, that’s not actually the end of the story. When Joseph says no, Potiphar’s wife falsely accuses him of rape and has him jailed. To further complicate things, being hit on by your boss’s wife is sexual harassment rather than seduction. There’s lots of stuff to unpack in this story, especially when coming from a consent-based ethics. But Piper only cites the first verse, and he reduces it to “seduction.” I suppose this is convenient: It means he doesn’t have to get into issues of consent (and whether Joseph was in a position where he could consent), and it also means he can dirty the word seduction by associating it with a situation that ultimately turned on sexual harassment and false rape accusations, not seduction. But since Piper made this about seduction, it’s seduction we’re going to talk about!

We’ve talked here before about the way the conservative evangelical world can desexualize women. The idea is that men are sexual, they go out and act and take, and women are not sexual, they surrender and give. Remember that Doug Wilson has used the narrative of “conquering” and “surrendering” to describe sex within marriage. Men pursue, women do not. So you may be surprised, based on this, that Piper would speak of women seducing. Doesn’t this suggest that women are sexual, too? Well, not quite. Have a look through the Bible. When women are portrayed as sexual, it is as prostitutes and seductresses. Think Delilah. In the Bible, sexual women are the bad guys.

Of course, there’s another point to be made too: within conservative evangelicalism, dressing immodestly is often seen as an act of seduction in and of itself. John Piper himself had this to say when addressing the question of female “modesty”:

Necklines are an issue these days. Everywhere I turn—at the airport and at church—the necklines are plunging! Some fashion designers in the world are communicating to women today that the thing to do is have your neckline split extend too low.

Women should dress in such a way that they draw men’s attention towards their eyes, their face, and not towards the other parts of their bodies.

Piper doesn’t use the term “seduction” in this piece, but others do:

I was sitting on the couch wearing a long, loose, modest dress. It was the end of a long day of church meetings and we were gathered at my parents’ home for a fellowship. I was exhausted. I yawned and leaned back a little on the cushions, resting my back.

Several church members sat in other seats, talking. Suddenly, a middle-aged man sitting across the room stood up and stalked out of the room, clearly agitated. I saw him leave but had no idea what had just happened.

A moment later, someone tapped me on the shoulder and told me to sit upright. I straightened up, confused.

“You’re leaning against the couch cushions in a suggestive manner. Brother So-and-So thinks you’re intentionally trying to seduce him and he refuses to come back into the room until you’re sitting completely upright.”

“What?! I’m not trying to seduce anyone, I’m just sitting here trying to rest!”

I received no answer. I was simply expected to comply.

I felt a rush of shame spread over my entire body. I started shaking. I was mortified that anyone–much less a man twice my age!–would think I was intentionally trying to seduce him by…resting my back against the couch cushions. How was that even possible?

It was possible because women were held responsible for the sexual thought lives of men. If a man was aroused–no matter how ridiculous or far-fetched the perceived “immodesty”–women were blamed.

I fled the room and could never look at that older man in the eyes again. I felt violated, somehow.

It was disconcerting and sickening to feel like no matter how modestly I dressed, every inch of my being from how I sat, to how I walked, to how I wore my purse (never across the chest! only over the shoulder!), to how I spoke to how I moved–every bit of me was scrutinized for ANY POSSIBLE indication of being sexually suggestive.

In too many conservative evangelical and fundamentalist circles, anything a teenage girl or woman wears or does that arouses a man sexually is considered an act of seduction. Everything is scrutinized, from how a girl walks to how freely she talks with members of the opposite gender.

In other words, within John Piper’s circles, seduction is something a woman must actively work to avoid. In a sense, seduction is the default—and existing while female is to be a seductress. This is why there are rules—don’t wear this, don’t wear that, stand like this, sit like that, and for goodness sake don’t let a guy see you looking at him, he’ll think it’s an invitation! We see this in mainstream culture too, where it is somehow acceptable to ask what rape victims were wearing—as though that is even relevant.

Perhaps Piper thinks rape is just as hard for men to avoid as seduction is for women to avoid? Now that’s a scary thought.

January 28, 2015 What Acceptance Can Mean
Recent Comments
0 | Leave a Comment
Browse Our Archives
get the latest from
Nonreligious
Sign up for our newsletter
POPULAR AT PATHEOS Nonreligious
1