Why Does Lily Work Two Jobs while Carl is Unemployed?

Why Does Lily Work Two Jobs while Carl is Unemployed? February 28, 2015 Libby Anne

I recently read a 2014 article titled For white working-class women, it makes sense to stay single mothers. I found the article fascinating. The authors, both law professors, focus on the story of Lily, a working-class woman who became pregnant and subsequently broke up with her boyfriend, Carl. As they explain, Lily was employed while Carl was not, and Lily found Carl a drain on her finances—a liability she could not afford while raising a child. As she puts it:

Unfortunately, the authors state that Carl’s economic options have shrunk while Lily’s have increased with barely a nod to the fact that Carl’s options are still greater than Lily’s. Because of this, I could see someone reading the piece and coming away with the mistaken impression that feminism has turned things upside down, that working-class women have surpassed men and working-class men are being shortchanged. Here is an example of this confusion in the article itself:

In our view what would make the most difference to this unfair marriage market are  policies that would increase the number and quality of jobs available to working class men, retraining and unemployment benefits that fill in the gaps between jobs, and ongoing support for women’s autonomy. Since the ’80s, the gender gap in wages has increased at the top but shrunk in the middle.

The authors state that the wage gap has only shrunk, not disappeared, and yet they call for increasing the jobs available to working-class men specifically, rather than for increasing the jobs available to working class individuals of all genders. The implication of this call—or at least, the implication that many readers will take away from it—is that working class women now have more opportunities than working class men, but this is neither what the rest of the article suggests nor the reality.

The authors don’t mention Lily having any college education, so I think we can assume that she doesn’t. The article opens by mentioning that Lily works two jobs, but it doesn’t mention the nature of those jobs. Given Lily’s lack of college education and her need to work two jobs, I think we can assume that these are services jobs—in other words, that Lily is waiting tables at Applebees or stocking shelves at Walmart. This leaves me with a question. Why doesn’t unemployed Carl apply for a similar job?

Applebees and Walmart do not, to my knowledge, discriminate against male applicants. Indeed, male employees at Walmart have greater chances for advancement than female employees, given that they are disproportionately chosen for management positions. In other words, service sector jobs actually offer Carl more chance for advancement than they offer Lily. And yet Lily is working two of them while Carl is unemployed.

The authors explain Lily’s decision to break up with Carl as follows:

The economy has changed. A higher percentage of men today than 50 years ago have trouble finding steady employment, securing raises and promotions, or remaining sober and productive. Blue-collar men like Carl have lost ground while more highly educated men  have gained. The unemployment rate for all men ages 20–24 is almost 13 percent, and those with only a high school education are more than twice as likely to be unemployed as those with a college degree. Moreover, many of the jobs that are available have become less reliable than they were for Carl’s dad. They don’t pay as well, last as long, or offer promotions or training. Carl has quit more than one job because he got fed up with his boss. More recently, he was laid off because construction work dried up during a particularly cold spell during the winter. After the layoff, he hung around with his friends, drinking and playing video games. Lily finally had enough when she found out that Carl had run up several hundred dollars in expenses on her credit card.  Lily knows she will never be able to depend on him and, particularly now that she has a child, she doesn’t believe she can afford the risk.

The authors mention that Carl has quit several jobs because he was “fed up” with his boss and that Carl had a construction job until he was laid off during the slow season. Could Lily have gotten Carl’s former construction job? I doubt she would have thought herself qualified to apply for it, but even if she had, she likely would not have been hired due to her gender. And yet, construction jobs generally pay significantly more than service sector jobs. In other words, Carl may have fewer economic opportunities than his father—I don’t deny that!—but he still has more economic opportunities than Lily.

Take a look at this graph based on 2009 data in Mississippi: 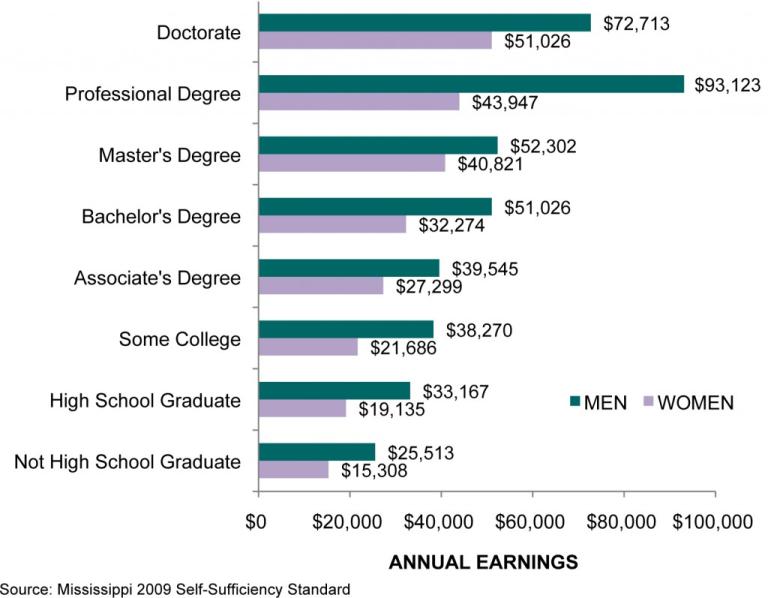 And this one, which uses national-level data: 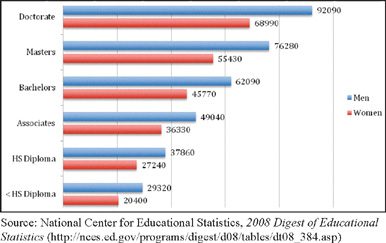 As the stable, solid jobs previously available to working-class men become more rare, more working-class men are finding that the less stable, less well paying jobs traditionally held by working-class women are the only options available to them. While women like Lily are willing to work these jobs (and may not have expected more), some men, like Carl, may see these jobs as beneath them. In a very real sense, this is about a loss of privilege. Working-class men have traditionally had both more and better job opportunities than working-class women, and when these dry up and they find themselves faced with the same options as women they feel that they have been cheated out of what should be their right.

March 1, 2015 When We Expect More of Our Children than of Ourselves
Recent Comments
0 | Leave a Comment
"even if she rejects a different authorship, she should at least know that this is ..."
Nea Lori Alexander and the Puzzle Piece ..."
"OH MY GOSH I read his Seventh Son on the recommendation of a friend, and ..."
Libby Anne Island of Aquarius: No More Island, ..."
"Ken Ham does not like Catholicism. But that seems less likely to be due to ..."
Michael W Busch Ken Ham and the Young Earth ..."
"Considering that the virus has been around for less than a year, I find it ..."
Julanar Ken Ham and the Young Earth ..."
Browse Our Archives
get the latest from
Love, Joy, Feminism
Sign up for our newsletter
POPULAR AT PATHEOS Nonreligious
1