The Most Unconvincing Evidence for God Ever

The Most Unconvincing Evidence for God Ever May 14, 2015 Libby Anne

I find that one way people argue for God’s existence is to point to specific times they believe God has helped them. But I don’t think they generally stop and think about how what they’re saying sounds to someone like me, someone not also religious. Let me offer an example. 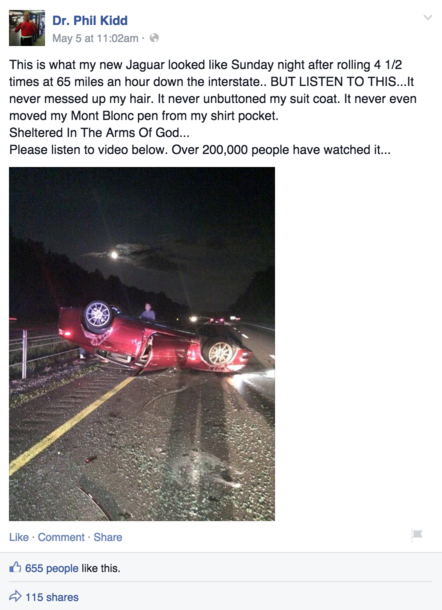 As Hemant Mehta pointed out, Phil’s wife suffered a spinal injury and is in a neck brace. One has to wonder, did God not have enough arms to shelter Phil’s wife as well? But even if Phil had been the only passenger in the car, we still have to wonder why God is so selective in who he protects—why protect Phil while other ministers die in car wrecks?

And that, honestly, is the problem I have with this argument for God’s existence. If God cured your cancer, why did he let the woman in the hospital bed next to you die of her cancer? If God went out of his way to save a parking space for you right by the door, why did he let all those people in West Africa die of ebola?

Look, I’m not an anti-theist. If you feel that God cares for you personally and is involved in your life on a daily basis, that’s fine by me. But please understand that trying to convince me that God exists by telling me that he made you lose your cell phone which in turn made you get out the door to your appointment late and thus you missed being involved in a major car accident on I-30 isn’t going to get very far, because I’m going to be wondering why God didn’t just prevent that accident on I-30. If God can hide a cell phone, surely he can prompt someone to look again before making a left turn.

We hear this when there are earthquakes, or tornados, too. Look, this baby survived 22 hours in the rubble and was completely unharmed when rescuers found her! This is the work of God! Well honestly, if that’s the best your God could do, I’m not so impressed. Where’s that God that moves mountains, and surely could prevent earthquakes from happening in the first place? Why did God choose to save that baby, and not the dozens of other babies living nearby who did perish in the quake?

I get that this is part of the larger problem of evil, and I understand that theologians have worked for centuries to find ways to explain or understand it. I’m not arguing that the existence of evil and pain and suffering disproves the existence of a God (although some would), I’m simply pointing out that your argument that God exists because he got you a new job at the very moment you were let go from your old job isn’t going to be very convincing when there are still millions of unemployed people out there looking for work—or when your equally devout brother is still out of work.

Oh and also? People of every religion have these same stories of how their God (or one of a pantheon of gods) has personally helped them out, so unless you’re a universalist, you may want to reconsider your entire approach here. Or you could be like the evangelicals I grew up among, and argue that when these sorts of “divine favors” happen to individuals in false religions, they’re carried out by demons intent on deceiving people and keeping them in the dark. But in that case, how are you really sure you’re worshiping God, and not also being deceived?

Honestly, I think these “divine favor” stories tend to be more about encouraging the faithful than they are about convincing the doubters, because I can’t imagine how these stories would make any headway with those not already in the group. I’ll write more about this later, but I feel the same way about many other “apologetics” arguments I learned as a child, such as the argument that the resurrection must have happened because the tomb was empty, which rests on the assumption that the Biblical is an accurate historical account. These “arguments” make no sense unless you’re already converted.

May 13, 2015
Can You Be More Deceptive? Homeschool Edition
Next Post

May 15, 2015 Anonymous Tip: Good Christian Lawyer Peter
Recent Comments
0 | Leave a Comment
Browse Our Archives
get the latest from
Nonreligious
Sign up for our newsletter
POPULAR AT PATHEOS Nonreligious
1