This week the news broke that Josh Duggar sexually molested at least five girls in two families while he was a teen. I can’t say for sure what Josh Duggar’s counseling looked like, though it appears it was handled in-house, through the family and likely also through the church and Christian ministries the family follows, such as Bill Gothard’s Advanced Training Institute (ATI). What I can do is speak to the sort of counseling Bill Gothard and ATI provide.

The Duggars have long been avid followers of Gothard and his ministry. They’ve used their platform to promote Gothard, his teaching material, and his homeschool curriculum, which the family used until recently. The older Duggar children have consistently attended ATI seminars and retreats, including Journey to the Heart (for the girls) and ALERT (for the boys). Gothard was outed as a predator of teen girls last year and removed from his leadership position, but the Duggars continue to serve for speakers at ATI conferences. The Duggars’ connection to Gothard and ATI is not incidental or tangential.

Just what do Gothard and ATI teach about sexual abuse and about situations where the perpetrator is a minor? We can find out by looking at some of their materials. For example, have a look at “Counseling Sexual Abuse,” a document distributed at ATI seminars for over a decade: 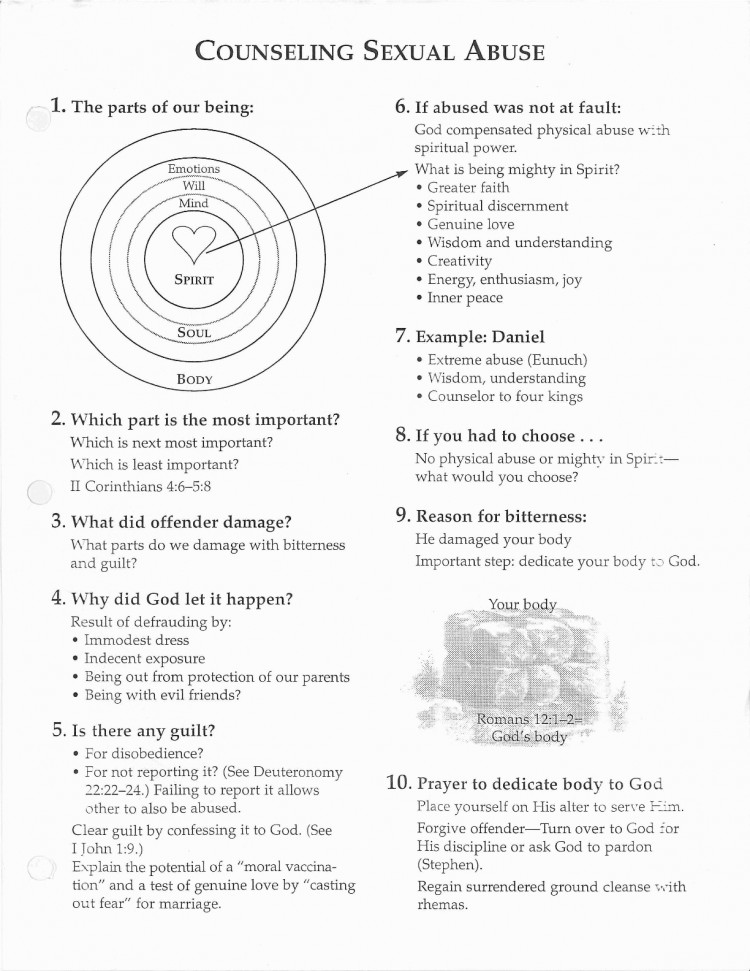 The most obvious problem here is the victim blaming.

Result of defrauding by:

But there’s also something more insidious going on.

3. What did the offender damage?

What parts do we damage with bitterness and guilt?

Remember that point 3 comes immediately after points 1 and 2, which portray the spirit as more important than the body. In other words, Gothard contends that while the offender damages only the victim’s body, the victim damages their spirit with bitterness and guilt—and that is the greater crime.

This is not best practices for counseling victims of sexual abuse.

What advice does Gothard have for situations where parents find that their teenage son has sexually molested younger children? Let’s look at a Gothard article titled Lessons from Moral Failures in a Family:

Lessons From Moral Failures in a Family

The parents were shocked and grieved as social workers visited their home and confirmed reports that an older brother was guilty of sexually abusing younger ones in his family. The damage to the younger children, the ridicule to the cause of Christ, the shame of detailed publicity, and the scars to the life and reputation of the boy were indescribably painful to the family and their friends. The boy did repent of what he had done; now that time has passed, he was asked the following questions:

1. What were the early indications that you had the problem?

2. What conditions or circumstances contributed to the problem?

3. What steps could your parents have taken before it happened?

4. What could have been done to avoid it?

5. What teaching could have been given to each child to resist evil?

6. What factors in the home contributed to immodesty and temptation?

The boy wrote out the following answers to these questions. The information he gives is so helpful that every parent should read it and diligently apply the lessons that this family learned the hard way.

To recap, an older brother in a large family sexually abused his younger sisters, and here, after an indeterminate amount of time has passed, Gothard asks this young man (who appears to be still a minor) to discuss the factors that led to his crime and what his parents could have done differently. Note that Gothard is giving the offender a platform, but not his victims. While the boy’s mother does get a note in at the end, his victims are silenced.

On the plus side, he does at least chalk part of the problem up to the lack of sex education and a lack of open communication between him and his parents on subjects relating to sexuality. This is at least something.

However, there is also this:

The need for modesty in the home

Modesty was a factor. It was not at the level it should have been in my family. It was not uncommon for my younger siblings to come out of their baths naked or with a towel. They would often run around the house for the next twenty minutes until my mom or sister got around to dressing them.

Changing my younger sisters’ diapers when they were really young may not have been a big thing, but it really did not have to be that way (if we had only applied Levitical law). My younger sisters used to wear dresses often, but as they were young and not aware of modesty, they did not behave in them as they should.

Mom did not push the modesty unless we were in public, and Dad only had the opportunity to mention it during weekends. Little people do not realize their nakedness right away. It takes several years before they grasp it. It needs to be taught to them. My mom is a nurse, and the human body was not a big deal to her. I guess she didn’t want it to be for her children either.

She and I have talked about it. She explained to me that she had no idea how visual male sexuality is, compared to women who are mainly by touch. I am so grateful my parents have changed so much of this area in our home. This was not a major reason for the offending, but it allowed my little sister to be open to what I made her do. I don’t think so much teaching was necessary because everyone was so young. However, a different lifestyle, with more modesty, might have prevented what happened.

And so here it is again—this idea that a little girl’s lack of modesty can be a factor in her molestation. We’re not even talking about teenage girls here (which would be bad enough), we’re talking about children.

At the end of the article Gothard lays out these pointers for parents:

Now maybe I’m missing something, but I don’t see anything here about giving your children more comprehensive sex education. Yes, it says to “provide guidelines on all physical contacts between children,” but that’s it. That’s something, but not enough. I also don’t think this list goes far enough in encouraging clear and open communication, with its focus on accountability and root problems rather than on fostering openness between parent and child.

And then, of course, there is the stuff about pornography, immodesty, and boys changing diapers (not sure where the babysitting bit went), as though those things were the problem here.

After reading this document, I became curious. What does professional literature say about sibling sexual abuse, and about what factors contribute to it? How does Gothard’s treatment of this situation compare to current professional standards? I did some digging and found an informative Social Work Today article on the topic. Here is an excerpt talking about the contributing factors:

Sibling sexual abuse victims often live in dysfunctional family environments that subtly foster incestuous behaviors and are not conducive to disclosing the secret. Sibling incest appears more likely to occur in large families characterized by physical and emotional violence, marital discord, explicit and implicit sexual tensions, and blurred intrafamilial boundaries. Emotionally and/or physically absent parents may empower older siblings to assume parental roles. In short, these families are chaotic and unlikely to recognize the significance of behaviors occurring between siblings. If sexual behaviors are noticed, they are likely to be minimized and misinterpreted as a normal aspect of childhood development. Lack of adequate parental supervision provides perpetrators with ongoing opportunities to offend and protects the secret, leaving the victim vulnerable to continuing abuse (Asherman & Safier, 1990; Caffaro & Conn-Caffaro, 2005).

In the cautionary tale Gothard published, the young offender placed part of the blame on being asked to babysit and change his sister’s diapers. Here, the professional literature on sibling sexual abuse points to lack of parental supervision, emotionally or physically absent parents, and older siblings assuming parental roles as contributing factors. I suspect that this may have been what the youthful offender was trying to reach for, albeit inadequately, and it went over Gothard’s head completely.

In the end, it is incredibly clear that Gothard has no idea what he’s talking about when it comes to minor child sexual offenders, or sexual abuse in general. From his victim blaming to his complete ignorance of the factors that contribute to such abuse, Gothard is unable to effectively grapple with these problems or support victims.

May 21, 2015
What You Need to Know about the Josh Duggar Police Report
Next Post