Dear Adam: Being Gay Is Not Just about Sex

There’s a comic going around titled “If you’re gay, I want you to know that I don’t hate you,” by comic artist Adam Ford. In it the author explains that everyone sins, and sexual sin of any sort keeps people from God, and actually he loves gay people and doesn’t hate them at all and that’s why he’s telling them this. I’m not going to go through the whole thing (it’s lengthy), but I do want to touch on a few points. 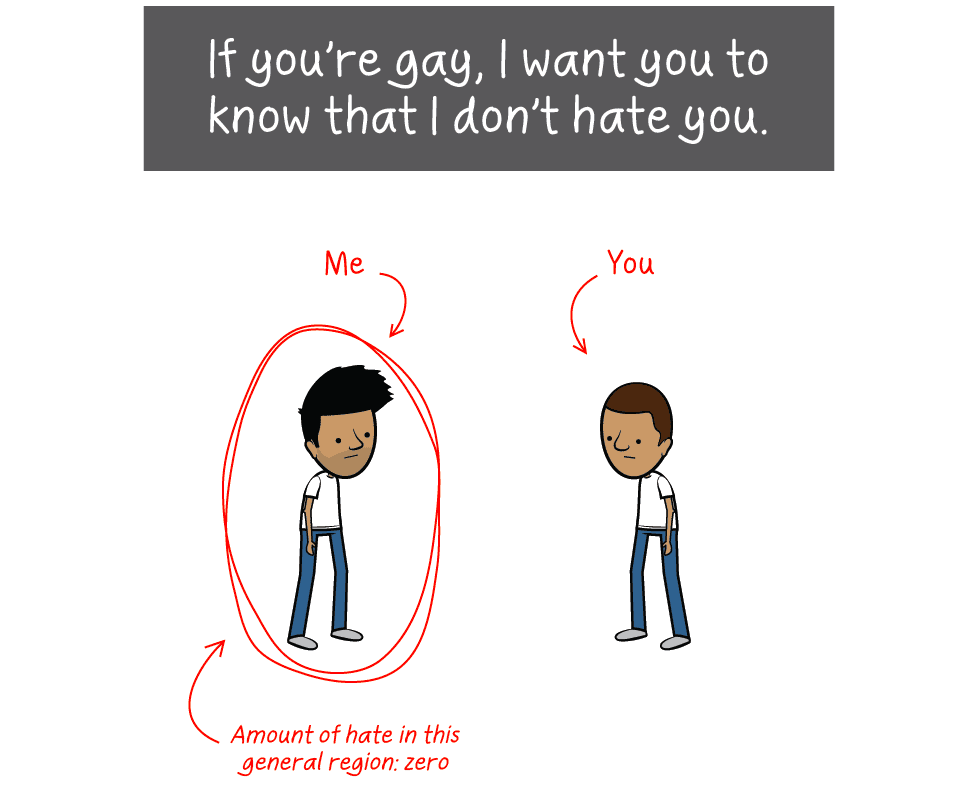 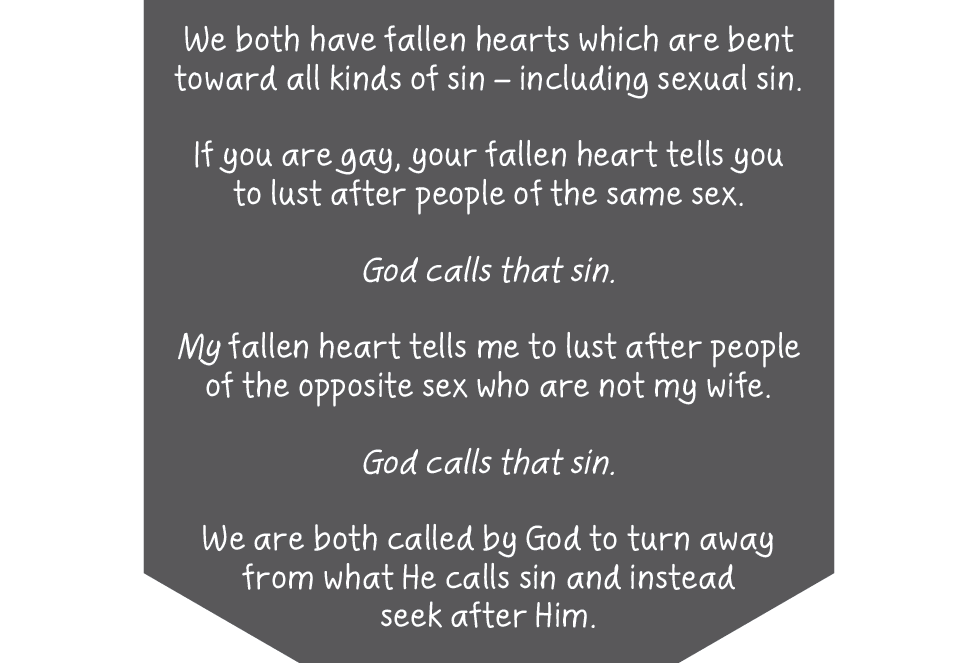 It’s like telling someone allergic to wheat, corn, soybeans, dairy, and seafood that you’re allergic to strawberries, and that that’s basically the same thing since you both have allergies. Um, no. It’s not. Or it’s like a rich person with closets and closets telling someone who has never had a new piece of clothing that you totally know how they feel because you once wore a pair of shoes until the soles started coming off, and that’s basically the same.

Adam tells Steve that they both struggle with sexual temptation, but he at least has someone he can express himself with sexually while Steve (if he avoids temptation as Adam urges him to) never will, and can never. This is a big difference. 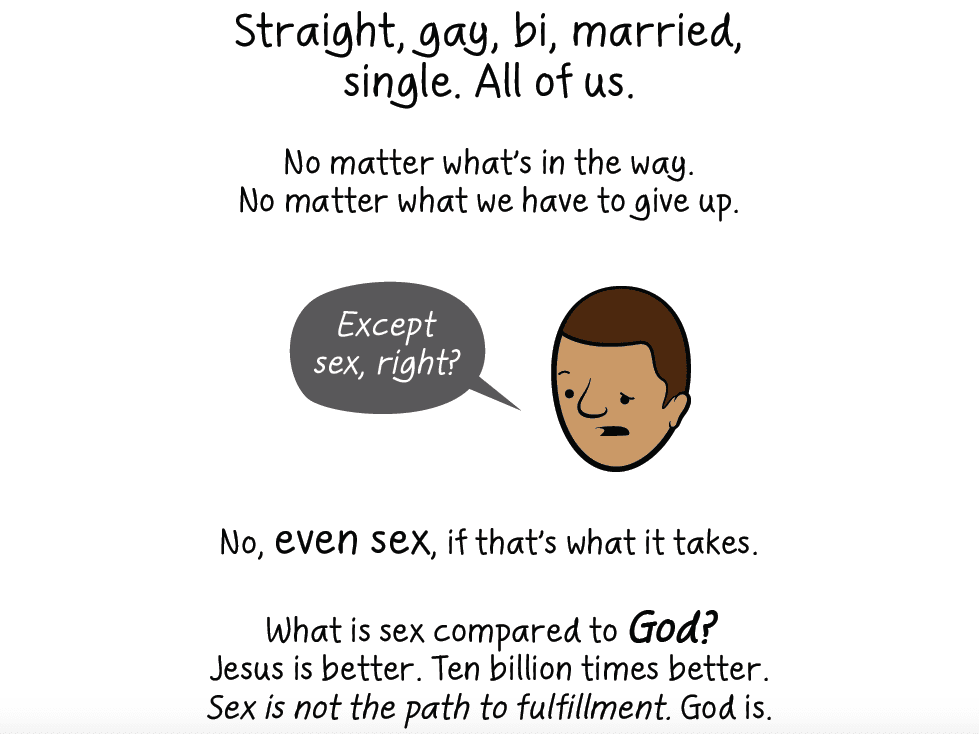 This is about so much more than just sex!

Seriously, what is this?! Gay people want to do more than have sex! They want to have relationships! They want to share life with people! They want to love and be loved! They want the support of a life partner! And to reduce all of that to sex? Yes, sex is important, but love and support? What about those? Why are evangelicals so focused on sex?! Same-sex attraction isn’t just sexual attraction. It’s also romantic attraction.

Okay, I have a question. What would Adam say if Steve asked whether he can live with his boyfriend, as a life partner, but not have sex with him? They’ll live together as roommates, but be more than roommates—except for no sex. I suspect Adam would have a problem with this. He might argue that it would be impossible for them to live together and be more than friends and not have sex, but even without that he’d still be very uncomfortable with the idea.

But why? If sex is the only issue, why would two gay men living together as celibate life partners be a problem? Because even for Adam, it’s not just about sex. If my evangelical upbringing gives me any insight, Adam probably believes that marriage should be between one man and one woman, and therefore that a marriage-like relationship between two same-sex partners, even without sex, is illegitimate or even downright sinful.

Adam isn’t just asking Steve to give up sex, he’s also asking Adam to give up ever having a life partner and a family of his own. But he’ll do his best to make it sound like it’s just about sex, because then if Steve doesn’t buy his pitch he can conclude that Steve cares more about sexual pleasure than he does about God and then pat himself on the back for having tried to safe such an unregenerate sinner, all the while ignoring the full realities of gay lives and gay relationships. 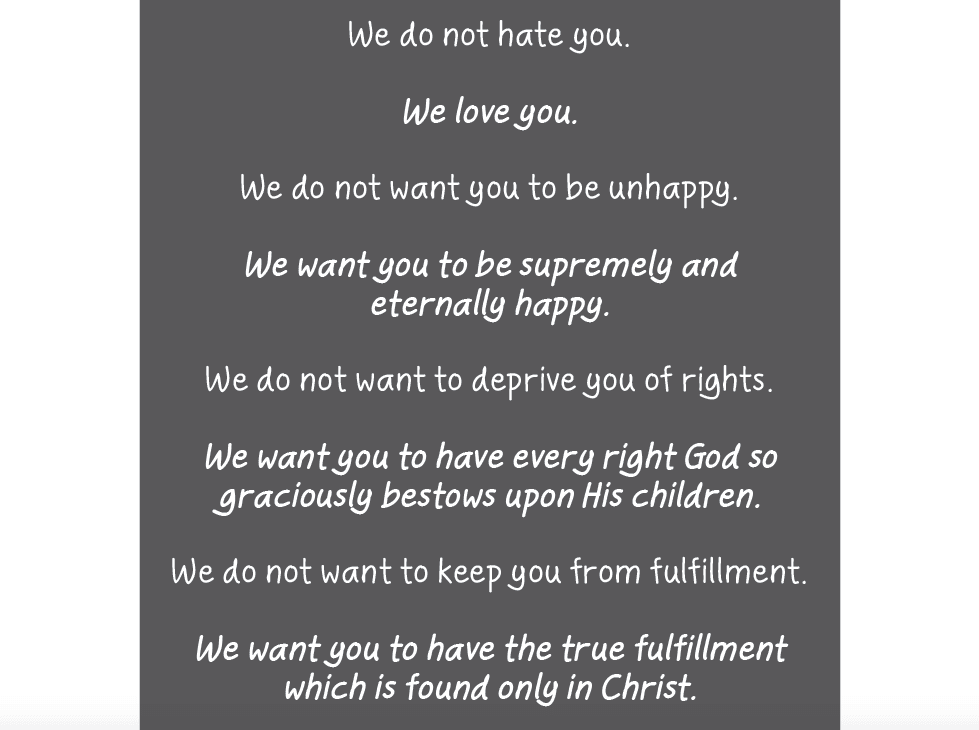 According to Adam’s Patreon bio, he’s married and has kids. How would he feel if someone told him that his marriage is a sin and that he needs to leave it, break up his family, and remain celibate and single for the rest of his life if he wants to be in obedience to God? I suspect Adam finds a lot of fulfillment in his relationship to his life partner and in his family life. I expect he finds a lot of happiness there as well. But surely he couldn’t complain if asked to give all that up, because it’s just sex, right? And as Adam himself says, what is sex compared to God?

I think by now you probably see my point. It’s not just sex, and it’s deceptive (and demeaning) to act as though it is.