Starbucks’ Red Cup and the Evangelicals Who Cried Wolf

Every year during November and December, Starbucks offers a “red cup” for use with its holiday beverages. While I do enjoy a good frappachino, I am not a Starbucks aficionado, so I was actually unaware of this phenomenon until this year, when Starbucks’ new design sparked outrage in the conservative and evangelical blogosphere. Curious, I checked it out. This year’s “red cup” looks like this: While I admit that the design is a bit boring, I feel compelled to point out that the red (especially with the green) definitely denotes Christmas. After all, Thanksgiving tends to be more orange in hue, New Year’s involves a variety of colors, and Hanukah’ colors are blue and white. While these cups are available for the entirety of November and December, the use of red as the color of choice speaks of the centrality and prominence of Christmas within the wider holiday season.

And as for the boring nature of this design, at least one blogger has pointed out that minimalism is in right now. It’s out with the busy, and in with the sleek and simple. In that context, this year’s design makes perfect sense.

So, why all the anger? Well, it seems that some Christians are so used to their privileged position in our holiday calendar that they decided that the removal of an explicitly Christmas-centered design from holiday cups that are very obviously still Christmas-centric was tantamount to Christian persecution. Yes, really.

Frankly, the only thing that can redeem them from this whitewashing of Christmas is to print Bible verses on their cups next year.

Only evangelicals are so entitled that they think demanding private companies to print Bible verses on the cups they sell their beverages in is somehow fair or reasonable. The supposed “war on Christmas” is nothing more than an attempt to force others to celebrate Christmas the way you want it celebrated. Last time I looked, this was a free country.

But wow, I though, the designs from previous years must have been super heavy on nativity scenes, carols, and Christmas trees for conservatives and evangelicals to become so upset at a plain red holiday cup. So I looked up some of the previous years’ designs. It turns out that there have been quite a variety of designs since the “red cup” debuted in 1997. Here are some samples: 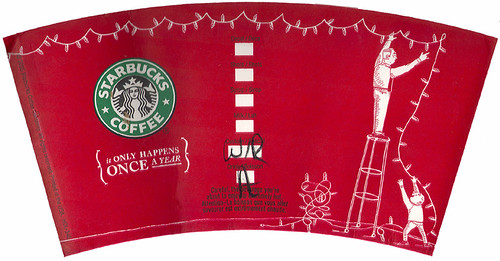 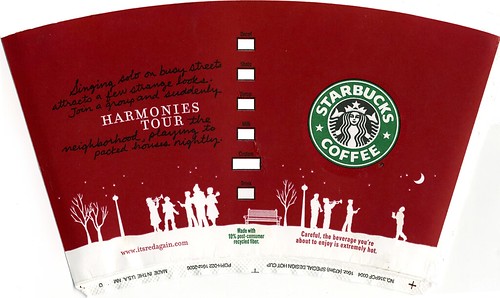 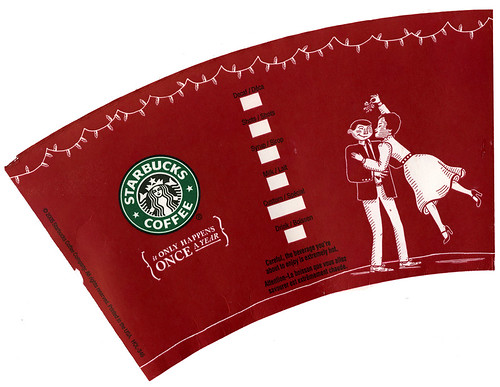 Don’t get me wrong, I’m not brushing aside the overall Christmas focus here. Remember that I already noted that simply having a red cup is Christmas-centric. My point is simply that it seems odd that evangelicals are complaining about the cup lacking an explicitly Christmas design when in fact the cup has not always had an explicitly Christmas design. Surely not even they have extended their Christian hegemony so far as to claim that snow is the sole property of Christmas.

Quick, someone tell the person who designed this Hanukah card that they accidentally made a Christmas card! Okay, not really, but you get the idea. Christmas doesn’t own snow.

There’s something else to note, too. I was unable to find a single red cup design that featured a nativity scene. The cups feature more secular elements of Christmas instead, focusing on ornaments and an overall feeling of holiday cheer. Now yes, even as Christmas has become more secular over time, it is still a Christian holiday. But I grew up in an evangelical home, and I was taught that these secular trappings of Christmas got in the way of what should be the true focus of the holiday—the birthday of Jesus. Why, then, are evangelicals so concerned about Starbucks going without secular images of Christmas on this year’s “red cup”?

If evangelicals wonder why people don’t take their claims of persecution seriously, this is why. I mean good god, Starbucks still sells bags of coffee beans labeled “Christmas Blend.” The fact that their holiday cup is red points to the centrality of Christmas in their holiday marketing. Starbucks does not sell a “Hanukah Blend” and they do not have blue Holiday cups (not even ones you can ask for).

Starbucks’ holiday marketing is about as Christmas-centric as you can get, and even that is not enough for evangelicals. Starbucks fails to put a Christmas tree or ornaments on their holiday cup this year, and conservatives call it a “war on Christmas” and “emblematic of the Christian culture cleansing of the West.”

The privilege is strong with these ones.