Who Is Outside the Circle?

Who Is Outside the Circle? February 5, 2016 Libby Anne

The Phoenix City Council has voted to replace the traditional prayer before their city council meetings with a moment of silence rather than allow a Satanist group a turn to give the prayer. As I was reading about this decision, I was struck by this image: 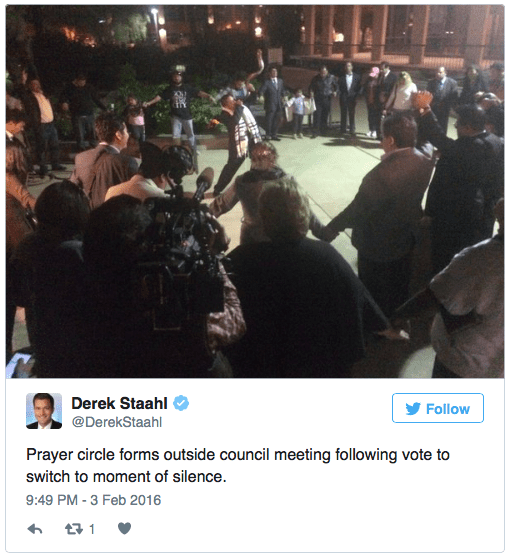 The text reads “Prayer circle forms outside council meeting following vote to switch to moment of silence” and the image shows a large circle of people, some in suits, holding hands. Do you know what I feel when I look at that picture?

I feel outside. I feel excluded.

What’s interesting is that the people forming that circle probably see prayer as unitive, and in a group of people who share the same beliefs, it can be. But the public prayers they are defending divide rather than uniting, because not everyone shares the same faith—or any faith at all. I am not religious. My husband is also not religious, and at this point, our children aren’t religious either. In many ways, we’re just like anyone else. Our children go to school, gymnastics, and martial arts. We go to the children’s museum, the park, the Y, and come home to have supper together, read books, and do some gaming together as a family. We go to a UU church, which is founded on common values rather than on common religious beliefs. But when I look at the circle in the image above, I become an outsider.

Don’t get me wrong, I have no problem with people gathering in like-minded religious groups and worshiping together. I have no problem with prayer circles in general, and I recognize that the people in that picture had a right to form that circle. But in that image, in that moment, those people were coming together in defense of Christian—yes, Christian—prayers at the beginning of their city council meetings. That wasn’t just some spontaneous outbreak of religious fervor. The strange thing is that they probably saw their act as unitive—the good people of the town coming together in the face of—of what, exactly? And that’s the problem.

It’s not just the nonreligious who are made to feel like outsiders in the face of the Christian majority working to cement its supremacy through public displays of Christianity such as opening prayers, it’s also those who aren’t Christian who are excluded. It’s also Jews, and Muslims, and Hindus, and Sikhs, and pagans. And this exclusion isn’t new. In the 1800s, amidst concerns about new immigrants, many common schools included daily reading from the Protestant Bible, which made the Catholic students feel like outsiders. In the 1950s, at the heart of the Cold War, schools in New York state opened with a prayer developed by Catholics, Protestants, and Jewish clergy—a prayer that made children who weren’t religious feel excluded.

Our public displays of what is often called “civil religion” should unite us, not divide us. We may be a majority-Christian nation, but we aren’t an only-Christian nation, and we are a nation ostensibly founded on religious freedom. When the founding founders declined to create an established religion, what they did was revolutionary. At the time, most countries had a state church. They chose a different route, because they knew that the young United States was already home to a religious diversity that would make an established church divisive, to say the least. While the United States doesn’t have a perfect record vis a vis a state establishment of religion—see the Bible reading and prayers mentioned above—it would behoove us to remember the underlying message—an establishment of religion in a country of diverse religious beliefs is divisive rather than unitive.

The people who formed that prayer circle in the image above had every right to do so, but it is only natural that their actions would leave people like me feeling like outsiders. When we look at controversies over public prayers at city councils or school board meetings, we need to ask who we leave standing on the outside looking in.
Stay in touch! Like Love, Joy, Feminism on Facebook: 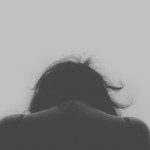 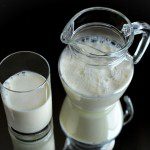