Kids These Days . . . Are Actually Okay

I’m sure you’re no stranger to people complaining about today’s young people. They’re addicted to technology, glued to their cell phones, unable to function in the real world. They’re selfish and entitled, they want everything handed to them on a plate. They don’t know what it is to work hard, they haven’t been properly disciplined. Our nation is in serious trouble. Or at least, so the narrative goes.

I recently noticed this narrative on display in a Facebook meme: 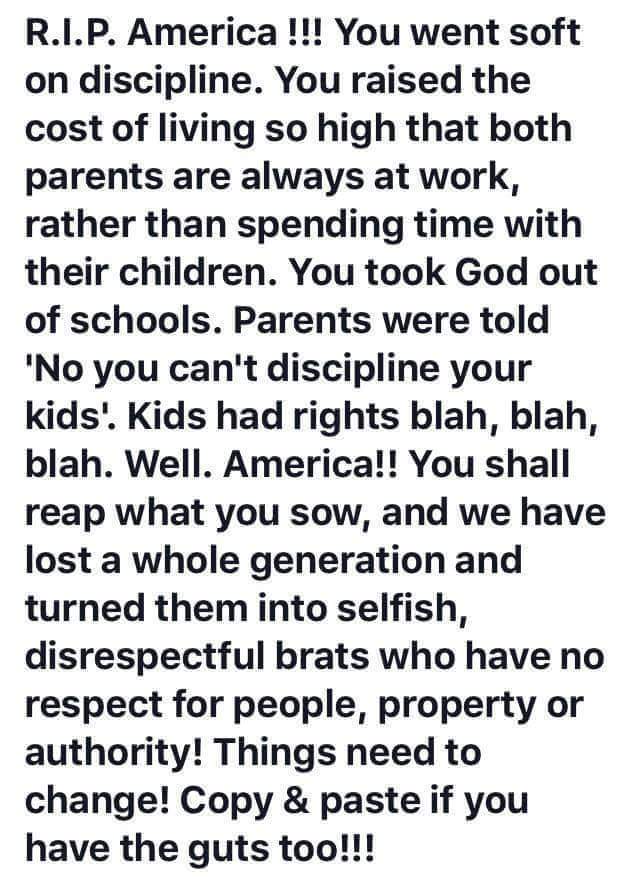 R.I.P. America!!! You went soft on discipline. You raised the cost of living so high that both parents are always at work, rather than spending time with their children. You took God out of schools. Parents are told ‘No you can’t discipline your kids’. Kids had rights blah, blah, blah. Well. America!! You shall reap what you sow, and we have lost a whole generation and turned them into selfish, disrespectful brats who have no respect for people, property or authority! Things need to change! Copy & paste if you have the guts too!!!

Reading this rant actually made me laugh, because I had just come upon a Vox article titled Today’s teens smoke less, drink less, and have sex less than any teens on record.

Every two years, the federal government puts out a detailed behemoth of a report on the state of American teenagers. It has data about all sorts of things, like how much teens drink, have sex, and use illicit drugs.

A few months ago, my colleagues and I noticed a surprising trend: American teens keep becoming better and better behaved.

They use fewer drugs, have less sex, fight less, and watch television less than previous generations. If you shooed these children away from your lawn, they’d likely do so very quickly and politely. They probably wouldn’t be on your lawn in the first place.

In fact, this Vox page has a fascinating interactive section that lets you see exactly how much less trouble teens today are getting in that you and your peers were, given your birth year.

Curious, I started looking into juvenile crime statistics. What I found was fascinating. Have a look at the juvenile arrest rate: 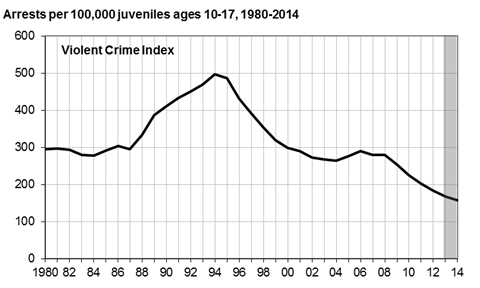 Want to get more specific? These graphs have three lines, one for 1980, one for 1993, and one for 2012. Have a look at the arrest rates for murder, robbery, and property crimes: 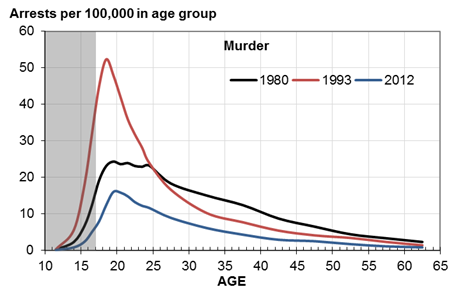 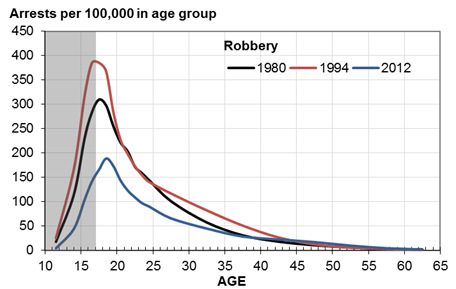 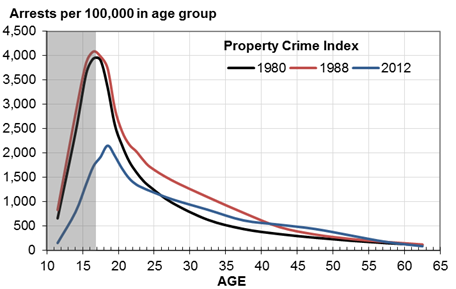 Apparently “selfish, disrespectful brats who have no respect for people, property or authority” commit less murder, robbery, and vandalism, smoke less, drink less, have sex less, get pregnant less, and do drugs less frequently than previous generations of young people. Yeah that makes sense. Except that it doesn’t. At all.

I am certain that there are a whole host of factors that help explain the decreased criminality of our young people. I suspect that increased efforts to cut down on bullying and to socialize children to be compassionate and kind to their peers and others around them play a role in the decline. I suspect that technology plays a role too—children who are writing blog posts or reading fan fiction online or watching Netflix are going to have less time to get into trouble. It’s possible too that the oft-maligned increase in structure plays a role as well—children who play soccer and go to SAT prep class after school aren’t going to have the same free time that they might have a generation or two ago.

But you know what I just did? I had a much more interesting conversation in a single paragraph than all of the people warning that today’s young people will be the death of our nation combined. 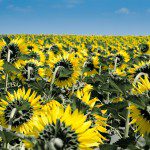 June 21, 2016 Hate Doesn't Always Come at the Point of a Gun
Recent Comments
0 | Leave a Comment
Browse Our Archives
Follow Us!

Nonreligious
Did Debi Pearl Even Read the Letter Before...
Love, Joy, Feminism
TRENDING AT PATHEOS Nonreligious