My regular readers are likely familiar with Doug Wilson by now. Wilson is an evangelical pastor who is influential in conservative circles. He lives in Idaho and has his own association of Christian schools, his own magazine, and a slew of books. He once co-wrote a book portraying slavery as a time as racial harmony. He also once asked a judge to show lenience toward a man who had admitted to sexually molesting multiple children—a man Wilson later married to a young woman in his church, blessing the young couple with children. And now, he has written an article on pastoral confidentiality and child abuse—something he calls a dilemma.

In the first place, when plausible suspicion arises that child abuse has occurred or is occurring, the first priority is to ensure that it does not continue in the present circumstance, and that it does not continue into the future, in any other circumstance. In other words, you might be solving the problem in your youth group by dismissing the youth minister, but if he gets a job at another church in the next city, you haven’t really fixed anything. Predatory child abuse is a crime, not just a sin, and so in principle the civil authorities do have the right and responsibility to be involved, and at that point church officials have an obligation to involve them. The simple fact of a reporting requirement is not tyranny. And Christians with tender hearts need to remember that abusers are clever, calculating, ingratiating, and know how to work the Jesus game.

Abusers are clever, calculating, and ingratiating—bear in mind that the man Wilson begged leniency for has gotten in trouble for violating the terms a judge set after he and his wife had a child. But Wilson’s completely correct in pointing out that dismissing someone from your church, and assuming that fixes the problem, isn’t enough, because it doesn’t. Boz Tchividijian of Godly Response to Abuse in the Christian Environment has often pointed out that without an organizational hierarchy, there’s nothing to stop abusers from moving from pastorate to pastorate or missionary post to missionary post, even after being discovered and dismissed.

But Wilson does not stop there. He goes on:

So how is there a dilemma then? The “authorities,” as we call them, have also become a massive part of our cultural decline. The average age of introduction to the world of porn is eleven years old, and who was it that made it easy for pornographers to insinuate themselves into homes? The authorities. Who is trying to mandate that local governments (and churches) allow sexually disturbed individuals into any restroom they please? The authorities. And remember these rest rooms are the one place where surveillance cameras are obviously not in operation. Who was it who determined that dismemberment and sale of children was a constitutional right? The highest authorities. Who is it that has abandoned our centuries-long commitment to the rules of evidence and the rights of the accused in child molestation cases? The authorities. And who was it that set up grooming classes in every government school, so that adults could easily introduce young people to a wide assortment of perversions? The authorities.

Wilson goes on as follows:

So this is the dilemma. A wise Christian pastor knows that a sexual predator should be restrained and prosecuted by the authorities, but he also knows that we live in a time when ungodly standards are often assumed by the authorities, and also when unreasonable suspicions are officially considered reasonable. When a kid can fall out of a tree in the backyard and break his arm, and that is all it takes for a doctor down at the ER to feel the need to call CPS, then clearly we live in demented times.

That second sentence should have stopped right before the word “but.” There is no but. There is also so much misleading information here. ER doctors are trained in recognizing signs of child abuse, and they are unlikely to make a report over a simple broken arm. In addition, being reported to CPS is not the same as being found guilty. Social workers are trained in how to recognize whether or not there are problems in a home. Social workers do not, as a whole, assume guilt. They visit families to find out whether there is a problem, not to drag them straight to court. And—and I cannot emphasize this enough—in most cases, child abuse and neglect allegations are found to be unsubstantiated, no harm no foul.

I am not unfamiliar with this fear, though. I grew up with it. As a child, I was given instructions for what to do if a social worker were to ever show up at our door—i.e., call HSLDA, get a lawyer on the line. Today, I’m a mother with two children of my own. And guess what? I was reported to CPS. I had a social worker show up on my own doorstep. It was my mother’s worst nightmare come to visit me. I could feel the steady diet of fear my parents had fed me rising up to engulf me—but I swallowed it and pushed it down. And guess what? Everything was fine. The social workers spoke with me, I showed them the children, our home, and they closed the case. They were extremely professional and friendly and no one was traumatized. The end.

And yet, look at what Wilson says:

And so the dilemma is this. No conscientious pastor can be willingly complicit in a child having to spend one more minute under the control of his abuser, and no pastor can willingly turn over an innocent person to a system that will simply presume him to be guilty, and quite possibly make a hash out of the rest of his life. That really is a true pastoral dilemma.

No, no, no, no, no! No pastor has the ability to conclusively determine that a person accused of child sexual abuse is innocent! That’s why we have trained professionals whose job it is to investigate! Wilson’s suggestion that the “system” presumes innocent individuals guilty and makes “hash” out of innocent people’s lives is dangerous in the extreme. Is the justice system perfect? Of course not! But the justice system does have standards, and thresholds of evidence that have to be met.

Let’s be very clear about what Wilson is suggesting here. If a child tells her pastor that she has been sexually molested by her father, he should report that to the authorities. But Wilson disagrees. He suggests, instead, that the pastor’s role is to investigate to determine whether or not he thinks the girl’s father actually molested her. Only if he determines the father is guilty should a pastor report the girl’s allegations. That is not okay. Pastors are not trained in the dynamics of sexual abuse. They’re not trained in investigating sexual abuse. That is not their job.

Wilson isn’t shy that this is what he’s saying.

You are not “blaming the victim” if you are honestly involved in finding out who the victim is. A young girl abused by her stepfather is the victim. A stepfather falsely accused by his stepdaughter is the victim. If your approach is “ready, fire, aim,” it does not matter if you say that your intent was to side with the victim. That really must be your first priority, but getting the identity of the victim right is part of it.

I’m being repetitive here, but it is not the pastor’s job to determine who the victim is. Pastors are not trained or equipped in investigating child sexual abuse, period.

In addition, Wilson’s framing here suggests some sort of equivalence, and positions children as potential abusers via false allegations. It is incredibly rare for a child to make a false allegation. No pastor is in a position to determine for certain that a child’s allegation is false. That is why we have a system for reporting and investigating child abuse allegations. Child welfare workers are trained in recognizing false allegations that may spring from messy custody cases, etc. Reporting allegations is not the same thing as convicting someone.

Wilson appears to think he’s warding off criticism by talking about how wily child abusers can be, but that does not erase the fact that he’s telling pastors they should investigate allegations of child sexual abuse themselves rather than reporting such allegations to the authorities. This is not okay. There are children who have ended up trapped in abusive situations because their pastors decided to ask around rather than risk reporting Brother Steven or Brother Andrew to the authorities.

I can’t believe this is even an issue. And yet, it is. 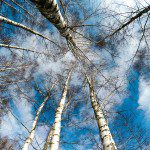 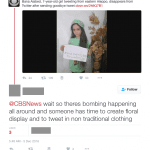 December 6, 2016 Trading in Stereotypes about the Middle East
Recent Comments
0 | Leave a Comment
Browse Our Archives
Follow Us!