Why Do So Many Evangelicals Oppose Efforts to Combat Climate Change?

June 2, 2017 by Libby Anne
0 Comments
Why Do So Many Evangelicals Oppose Efforts to Combat Climate Change? June 2, 2017 Libby Anne 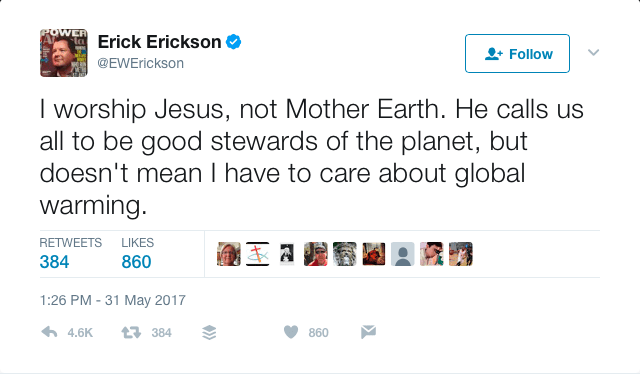 Text: I worship Jesus, not Mother Earth. He calls us all to be good stewards of the planet, but doesn’t mean I have to care about global warming.

I have rarely seen someone come this close—and yet remain so far.

Evangelicals overwhelmingly resist efforts to combat climate change—despite the fact that there are multiple Bible passages that seem to support such efforts, including the one referenced above by Erikson. Adam tended the garden. I’m pretty sure God didn’t intend for him to accidentally cause, say, the leopards to go extinct by messing with their habitat. Why the conservative opposition to efforts to combat climate change, in the face of biblical commands to be good stewards of the earth?

I suspect there are several reasons evangelicals have taken this position.

1. Evangelicals have struck an alliance with Republicans that is so strong that their beliefs are arguably more rooted in conservative politics than in anything in the Bible.

2. Since at least the postwar period, evangelicals have been in bed with big business. Big business has traditionally opposed efforts to cut carbon admissions, pouring money into discrediting the science behind climate change.

3. Many environmental activists use rhetoric that likens our planet to a mother, and imagery that draws on native religions that worshiped the earth. Many evangelicals will de facto oppose anything they believe is associated with “pagan” religions.

4. Many evangelicals believe that the earth will soon end and be destroyed. Given that, there may seem little reason to protect the environment. However, this conflicts with the command to be good stewards of the earth.

Regardless of the reasons for widespread evangelical opposition to combatting climate change, I hope Erikson’s tweet is obviously ridiculous enough to make at least a few of his followers scratch their heads. Change takes time, but seeds of doubt can build up and prompt individuals to look again at an issue they had thought settled. 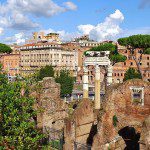 June 2, 2017
Voice in the Wind: Those Horrible, Immoral Romans
Next Post 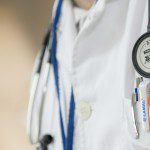