Doug Wilson: The National Anthem Is Required by God, but the Pledge is Socialist

To the surprise of no one, controversial pastor Doug Wilson has written a long, rambling blog post condemning the actions of Colin Kaepernick and other athletes who have taken the knee to protest racially discriminatory policing. Wilson may be an influential conservative evangelical author and minister, but he is also a troll, and I wasn’t going to bother responding—until a paragraph toward the end changed my mind, that is.

Next, the Pledge of Allegiance, given its socialist origins, and its use of the word indivisible (an attribute of deity) is problematic. It is a reasonable wish for us to hope that our country might never be divided, but it is statist nonsense to say a country is incapable of division, which is what indivisible means. It would be better to say, in pious Christian fashion, long live the king. It is not so good to say may the king live forever. Kings don’t live forever, whatever we want, but they can live a long time, and if they are decent rulers we can live in a relatively stable place. The Scriptures require us to be advocates of that.

Bear in mind that Wilson spent the entire post grousing about those who are taking down Confederate flags and statues. He called such activists “iconoclasts” and argued that Kaepernick’s action was illegitimate because the Bible commands Christians to “honor the emperor.” He attributed criticism of the national anthem to the fact that Francis Scott Key owned slaves and summarily dismissed it without any mention of the song’s lyrics, the actual reason Key chose the anthem to kneel.

And then, after all of that, Wilson declares the pledge of allegiance “problematic” due to “socialist origins” and the dictionary definition of the term “indivisible.” I’m sorry, but what kind of double standard is this?! Wilson has a problem with the pledge because its author, Francis Bellamy, was a socialist minister, but he simultaneously mocks those who point out that Francis Scott Key was a slaveowner as ridiculous. This is as close to the dictionary definition of a double standard as you can get.

In case you’re wondering, Bellamy worked at a family-centered magazine called Youth’s Companion and composed the pledge to be recited by school children as part of a Columbus Day school ceremony officially endorsed by Congress in 1892. Bellamy later said that he composed it with the memory of the Civil War in mind, which is why it stressed the nation’s indivisibility, along with liberty and justice. The pledge does not appear to have been inspired by Bellamy’s socialism in any way.

If Wilson is allowed to take issue with the pledge of allegiance over grammar and semantics, Kaepernick is certainly allowed to take issue with the national anthem because one of its stanzas glorifies the battlefield slaughter of slaves who ran away to fight for the British in return for freedom. One of these two men has principles; the other is simply being a smart-ass.

I bet Kaepernick wishes grammar and semantics were the most important things on his radar.

What’s most bizarre about all of this is Wilson appears to see no contradiction in what he is writing. Referring to standing during the national anthem, Wilson writes that “not only does the Bible allow for displays of this kind of honor, it requires us to participate in them as appropriate.” Wilson, in other words, writes that Kaepernick and other athletes are required by God to stand during the anthem—and then, several paragraphs later, he takes issue with the wording of the pledge of allegiance and advises Christians to alter the pledge when saying it.

This may be the most tone deaf I have seen Wilson yet. 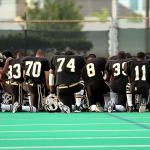 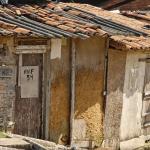