A few years back, I wrote a lot about the Home School Legal Defense Association, or HSLDA. I was homeschooled and grew up on HSLDA literature. Michael Farris, who founded HSLDA, also founded Patrick Henry College in Virginia; I went to a summer camp there. But a few years back, I, along with a number of other homeschool grads who were also blogging, began to have some serious problems with the organization.

Criticism of HSLDA has grown in recent years, and has come to center on the organization’s opposition to even the most reasonable bill designed to protect children whose parents may opt to homeschool them in an effort to conceal abuse or neglect. This isn’t a hypothetical thing. This is a thing that actually happens. HSLDA’s reaction has been to argue that such cases should not be cause to regulate homeschooling.

In the past two years, however, HSLDA has shown some signs that it may be beginning to shift. Perhaps the organization is beginning to recognize the callousness of its “these things happen” shrug and dance. Regardless, their rhetoric has changed. Before, they simply argued that child abuse has nothing to do with homeschooling; now, they’ve started saying that there are better ways to stop child abuse than oversight for homeschooling.

Have a look at this 2017 letter to Iowa lawmakers:

In 2012, Congress authorized the creation of the Commission to Eliminate Child Abuse and Neglect Fatalities (CECANF). The commission was composed of top experts in the field and held meetings and hearings planning several years in many localities across the nation.

The commission members heard from academics, experts, policymakers, and policy implementers, and collected an exhaustive amount of data on a truly national scale. This was possibly the most ambitious effort ever undertaken to gather credible data, analyze the problem, and craft workable strategies that could apply across our entire nation.

CECANF issued its final report in March 2016 (see link below). The commission’s top recommendation to the nations’ policymakers was: “Identify children and families most at risk of a maltreatment fatality” (page 13).

Homeschooling was never listed as a risk factor—or even mentioned.

The commission found that a prior report to social services is the “single strongest predictor of a child’s potential risk for injury death … before age 5″ (page 26).

(For a rebuttal to this letter, see here.)

The letter goes on to summarize two case studies included in the CECANF report. In Hillsborough County, Florida, and in Wichita, Kansas, communities decreased the number of maltreatment deaths by focusing on children with specific risk factors. HSLDA uses these cases to argue that children in Iowa would be best protected not by bills designed to protect children who are homeschooled, but by a focus on similar risk factors to those identified in Hillsborough County and Wichita. Do what these communities did, the letter says.

This new rhetorical framing allows those at HSLDA to argue that they do care about protecting children from child abuse. They just don’t think that homeschooling has anything to do with it. Instead, they say, they want to see responses to child abuse that focus on known risk factors. But is this actually true? No. No, it’s not.

See, I still get HSLDA articles in my feed reader, and an HSLDA news release that popped up in my reader last week suggests that HSLDA doesn’t actually believe its new, updated framing. Not in the least.

Government: “we’ll help you raise your baby!” Um, no!

Your response has been heard—Assembly Bill 430 has been removed from active legislation and referred to a study committee during 2019-2020 when the legislature is not in session!

This is a major victory for children and parents. As you may recall, this bill would have required social workers to make in-person visits to the homes of parents of newborns, to “offer help.”  Ronald Reagan said the most feared words in the English language were, “I’m from the government and I’m here to help.”

Although not a direct attack on homeschooling freedom, it was a direct attack on family freedom. We joined the statewide Nevada Homeschool Network to inform you of this unprecedented attempt to invade the private realm of family integrity by attempting to gain access to the family home.

The bill identified “at-risk” families that would receive the visit, but we did not think the “at risk categories” formed a reasonable basis for social workers to approach families with new babies in their homes, with the intent to “look around.” There is already enough stress on a new mom and dad without adding the additional stress of dealing with a social worker at your door asking if they can help you raise your child. How insulting.

This is clearly disingenuous. HSLDA can’t in good faith endorse the CECANF report and then de facto decide—without any supporting evidence—that it doesn’t like the risk factors identified by states implementing plans like those promoted in the report. HSLDA is not a child welfare organization. They aren’t experts in risk factors. This lack of expertise was ostensibly the reason they promoted the CECANF report—these were experts.

Before we discuss this further, however—and we will—let’s look at what Nevada Assembly Bill 43o would have actually done. Have a look at the bill’s text:

1. The Division [of Child and Family Services] shall establish by regulation and coordinate with other state and local governmental entities to carry out a family home visiting system to provide for appropriately trained professionals to visit the homes of children during early childhood. The system must:

(2) Improved safety and reduction in child abuse and neglect and other injuries to children;

(3) Improved economic security and self-sufficiency of families; and

(4) Enhanced early childhood development in the areas of social and emotional development, language, cognition and physical health that improves the readiness of the child for school.

While this home visit system is intended to serve as a prevention against child abuse and neglect, there are other goals as well—improved health outcomes, economic security, and child development outcomes. Similar visiting nurse systems are already in place in other countries, as well as in some states and local communities.

The Nevada bill is perfectly in line with the findings of the CECANF. Allow me to quote from the CECANF’s findings:

Removal and placement, even with relatives, should not be the “default” option when it comes to child safety. Other options exist, such as intervening earlier, so we can keep children at home while their parents receive quality services; more intensive monitoring and engagement by caseworkers and service providers; and evidence-based home visiting programs for families with newborns. Alternatives such as these are at the heart of the Commission’s recommendations to build a comprehensive 21st century child welfare system in which child protective services (CPS) agencies share responsibility with other agencies and organizations to ensure children’s safety.

Indeed, the very wording of Nevada Assembly Bill 430—evidence-based home visiting system—makes it clear that the bill is meant to implement the recommendations outlined in the CECANF report.

Let’s return to the bill:

(b) Identify and refer families for home visitation before or soon after birth. Such referrals must prioritize families to receive services based on risk factors known to impair childhood development, including, without limitation:

(2) A history of prenatal drug or alcohol abuse;

(3) A history of child abuse or neglect, domestic violence or other violence;

(4) Parents who are incarcerated;

(5) Parents who have reduced cognitive functioning or a significant disability;

(6) Insufficient financial resources to meet the needs of the family;

(7) A history of homelessness; and

(8) Any other risk factor identified by the Division.

The Nevada bill focuses specifically on families with risk factors—including both families with a history of child abuse and neglect reports, and families that simply need support. Note, too, that the bill allows the Division of Child and Family Services to identify other risk factors as well. This is also something the CECANF report called for—allowing state and local child welfare officials to analyze and identify risk factors in their specific areas.

Let’s turn to HSLDA’s 2017 Iowa letter for a refresher:

I urge the committee to read the full CECANF report, take advantage of the tremendous amount of legwork CECANF has already done, give particular attention to the Wichita and Hillsborough County case studies, and guide the state of Iowa to adopt proven strategies for reducing child abuse and neglect fatalities.

Based on this, HSLDA ought to have supported the Nevada bill. After all, Assembly Bill 430 set out to do exactly this—to let the CECANF guide their policy decisions in an effort to “adopt proven strategies” for reducing child abuse and neglect. But how did HSLDA actually respond? By fighting the bill tooth and nail.

The bill identified “at-risk” families that would receive the visit, but we did not think the “at risk categories” formed a reasonable basis for social workers to approach families with new babies in their homes, with the intent to “look around.” There is already enough stress on a new mom and dad without adding the additional stress of dealing with a social worker at your door asking if they can help you raise your child. How insulting.

So let’s get this straight. When an Iowa legislator introduced a bill designed to protect homeschooled children from abuse or neglect, HSLDA responded with a letter urging lawmakers to instead keep children save by following the recommendations of the CECANF report and copying systems in Hillsborough County and Wichita. But when a Nevada lawmaker introduced a bill that followed the recommendations of the CECANF report and created a system like those in Hillsborough County and Wichita, HSLDA said it was “insulting,”H and killed it.

If HSLDA ever references the CECANF report as a reason to kill homeschool oversight again, we need to be singing the story of Nevada Assembly Bill 430 from the rooftops. This is ridiculous and absurd. Talk about saying one thing and doing another—or talking out of both sides of your mouth! Feet to the fire time. No excuses. 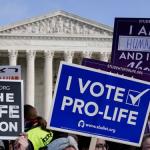 May 21, 2019 The Anti-Abortion Movement's Split Personality: Or, Why Georgia Just Legalized Murder
Recent Comments
0 | Leave a Comment
Browse Our Archives
Follow Us!