Regular readers will know that I write a lot about Answers in Genesis and young earth creationism. The reason for this isn’t complicated. My parents’ names are on a brick outside of the Creation Museum. I had Ken Ham give me his autograph at a conference he keynoted. Young earth creationism was in some sense foundational to my entire childhood—and to my coming of age. It was learning about evolution that forced me to rethink everything I’d learned in my evangelical homeschool childhood.

It shouldn’t be surprising, then, that my interest was piqued by the headline of a recent Answers in Genesis blog post: Ken Ham Solves Great Paleontological Mystery. What mystery? Also, Ken Ham is Answers in Genesis’ CEO, not one of their researchers. What was going on? I had to know.

Tucked away in the corner of a museum in Japan is a slab of limey shale. This rock features something incredible—259 fish, with scales, eyes, and fins—frozen as if in mid-swim. It appears these fish were preserved in the position they were in the instant they died. But how on earth is this possible? Fossil experts are confused, but I’ve solved the mystery!

A recent article reported on the attempt by several experts to discover how this fossil, found in the Green River Formation, was formed (and I encourage you to go to the article and see the photo—it’s a truly incredible fossil!). One expert, who has studied other fossils from the Green River Formation, said that the school of fish probably died together because of a volcanic eruption, a mass of oxygen-poor water, or a temperature shift, and then all the fish fell to the bottom of the lake and were aligned by the current and then fossilized. But mathematical models appear to rule out this explanation. Others have suggested maybe a collapsed sand dune buried them, but they admitted “they don’t have a great explanation.”

But I do! Since I start with the history in God’s Word, I have the proper lens with which to view the world. This school of fish was catastrophically buried by water-borne sediments during the immediate aftermath of the global flood of Noah’s day. It’s no great mystery!

What. No. That’s not—that’s not the problem here.

Here is the fossil in question: 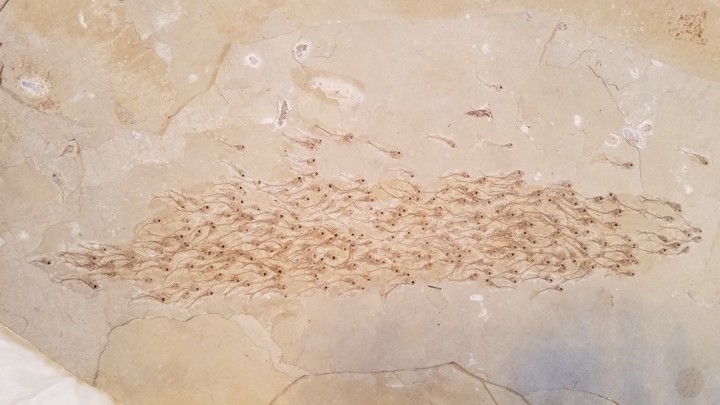 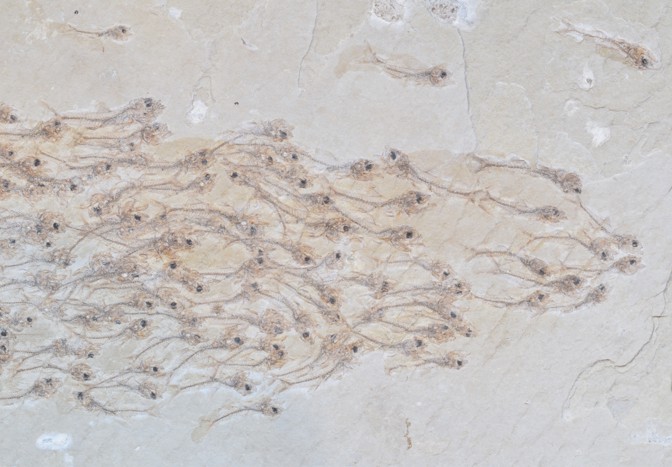 Ham says that these fish were “catastrophically buried by water-borne sediments during the immediate aftermath of the global flood of Noah’s day.” He adds that “it’s no great mystery!” Did Ham actually read anything at all about the fossil or the recent study responsible for its newfound notoriety? The author of this the, Nobuaki Mizumoto, argues that these fish were preserved in a sudden catastrophe.

“Fossils with animals preserved while doing something are referred to as ‘frozen behaviors’,” Dr. Mizumoto and co-authors said.

“Examples include fighting dinosaurs, queuing trilobites and insects in copulation. These fossils are assumed to result from rapid burial, which preserves individual positions during interactions.”

“Our fish shoal was fixed near instantaneously so that individual positions and heading directions were preserved in the fossil.”

Ham did not suddenly come up with a new solution. The very article he cited made it clear that some scientists—Mizumoto among them—think the fossils were flash buried in a sudden event. To be sure, Mizumoto doesn’t think this rapid burial was due to a global flood (he’d argue that it was a local event).

Ham seems to think he invented the idea that the fish were preserved instantaneously in a catastrophic event when he didn’t. What about Ham’s declaration that there is a big mystery about this fossil? Nope, nope, and more nope. Ham argued that “[f]ossil experts are confused,” suggesting they don’t have an explanation. Is there a mystery? Are fossil experts confused? Not exactly.

I think I know what happened here. The Atlantic article Ham cites plays up scientific mystery and intrigue for clicks. Science writers: please don’t do this. Ham shouldn’t have been confused by pop science writing like this, of course. He should have read the study. If he wants to prevent himself like a scientist, he ought to actually act like a scientist, and this ain’t it.

The reality is this: scientists disagree on how the fossil was preserved, and have put forward several competing theories. This is not strange. This is how science works.

Let’s have a look at the Atlantic article:

Lance Grande, a curator at the Field Museum who has studied fossils from the Green River Formation, even has a few featuring mass mortalities of fish in his collection. But none of them has fish all facing the same direction. “It is really strange,” he says. He’s unconvinced, though, that something could have killed the fish and preserved their positions in the very instant they died. “I think it’s got to be some postmortem stuff going on,” he says. A school of fish probably did die en masse—maybe from a volcanic eruption, maybe a mass of oxygen-less water, maybe just a temperature shift—and after death, it fell to the bottom of the lake and was perhaps aligned by a water current.

Mizumoto and his team did try to mathematically rule out this explanation. (The fish don’t appear to be sorted by size, as one might expect with a current.) They proposed the possibility of a sudden collapse of a sand dune, but Mizumoto admits that they don’t have a great explanation.

I tried finding Mizumoto’s study in order to examine his discussion of the fossil’s formation, but it is behind a paywall. Using google, however, I used keywords and was able to view parts of sentences from his study, including this one: “Despite lacking evidence of catastrophic events, we can use geological information…” Reading between the lines here, it appears that Mizumoto may have suggested a sand dune collapsing precisely because there is no evidence in local geology for massive cataclysms at the time the fossil was formed. Ham would know that if he’d done some digging.

Coincidentally, this problem Mizumoto references is the single biggest thing that broke my belief in young earth creationism: many, many, many rock layers do not look at all like they were laid down in a catastrophe. In fact, they look exactly like they weren’t laid down during a catastrophe. You can’t just proclaim that every rock layer out there was laid down in a global catastrophe when the evidence is clear that this is not true. At least, not without being highly, profoundly dishonest.

Ham’s “solution” to this fossil is impossible—the rock layers the fossil is buried in do not allow for it. And again, Ham would know this if he actually did some research instead of deciding he already knows everything. This fundamental misunderstanding of science and misplaced desire for certainty—as though scientific disagreement over how a fossil formed were a bad thing—is perhaps the single most significant thing that renders young earth creationist “scientists” anything but. 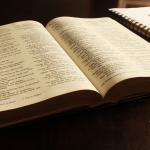 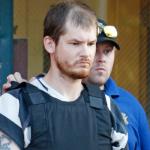 June 19, 2019 Timothy Jones Killed His Five Children. What Society Has to Answer For.
Recent Comments
0 | Leave a Comment
"Sending hugs. I'm sorry to hear that."
B.E. Miller Lesbian Duplex 274: An Open Thread
"I'd also like to point out how this same idea is used to excuse the ..."
Delta When Did Disabled Life Stop Mattering?
"I am so glad you are advocating for this child, but honestly, this lack of ..."
Delta When Did Disabled Life Stop Mattering?
"I'm so sorry that happened.This is what I think about every time I see people ..."
Delta On the Murders of Breonna Taylor ..."
Browse Our Archives
Follow Us!

Nonreligious
Some Christians Are Using the Pandemic as an...
Love, Joy, Feminism
TRENDING AT PATHEOS Nonreligious

Trump Poses With Bible After Mobilizing Military Against...
Shades Of Theocracy: President Donald Trump posed with a Bible in front...
view all Nonreligious blogs
What Are Your Thoughts?leave a comment
Copyright 2008-2020, Patheos. All rights reserved.