The Stations of the Cross: A Devotional Guide for Lent and Holy Week – The Ninth Station: Jesus Meets the Women of Jerusalem

The Ninth Station: Jesus Meets the Women of Jerusalem

A great number of the people followed him, and among them were women who were beating their breasts and wailing for him. But Jesus turned to them and said, “Daughters of Jerusalem, do not weep for me, but weep for yourselves and for your children. For the days are surely coming when they will say, ‘Blessed are the barren, and the wombs that never bore, and the breasts that never nursed.’ Then they will begin to say to the mountains, ‘Fall on us’; and to the hills, ‘Cover us.’ For if they do this when the wood is green, what will happen when it is dry?”

Growing up, I pictured the last week of Jesus’ life in stark, simple terms. Jerusalem, in my imagination, no doubt colored by Sunday school film strips, was a small town of maybe a few hundreds residents. All of these people came out to hail Jesus as king on Palm Sunday. Then, all of these same people showed up at Pilate’s palace to call for his crucifixion. Though I wasn’t a hardcore anti-Semite, I believed that “the Jews” wanted Jesus dead because he claimed to be God.

Whenever I pictured Jesus meeting the women of Jerusalem along the Via Dolorosa, there were just two or three women, no doubt followers of Jesus, who were weeping for him. Meanwhile, the rest of the Jewish crowd was egging on the Roman soldiers, eager to see Jesus crucified.

But a few years ago I began to study the New Testament records of Jesus’s death with greater care. To my surprise, I saw things I had completely overlooked before, things that changed my perception of Jesus’ last hours.

For example, Luke 23:27 notes that “a great number of people followed [Jesus]” as he walked to Golgotha. Luke gives no indication that they were crying out for Jesus’ death. In fact, by mentioning the women weeping for Jesus, Luke implies that the “great number of the people” were upset by what was happening to him. There’s no evidence that that were egging on the Roman soldiers, as I once imagined. Luke makes this even clearer a few verses later, after Jesus’ death: “And when all the crowds who had gathered there for this spectacle saw what had taken place, they returned home, beating their breasts” (Luke 23:48). This can only mean that the great majority of Jews who witnessed Jesus’ crucifixion were horrified, not happy, to see him die. They were certainly not among those who had earlier called for his crucifixion in Pilate’s courtyard.

The fact that only a small minority of Jews in Jerusalem actually wanted Jesus to be killed is confirmed by another passage in the Gospels that I had once overlooked. In Matthew, as Jesus is teaching in the temple during the days before his death, we read:

When the chief priests and the Pharisees heard his parables, they realized that he was speaking about them. They wanted to arrest him, but they feared the crowds, because they regarded him as a prophet. (Matthew 21:45-46)

The Jewish leaders wanted to arrest Jesus, but “they feared the crowds.” Why? Because the crowds “regarded him as a prophet” and, by implication, would have been horrified to see him arrested and crucified.

My close reading of the Gospels, combined with study of first-century Jewish history and culture, has corrected my youthful misunderstandings. I now recognize that Jerusalem wasn’t a small village, but a substantial city of perhaps 30,000 or people residents. During the Jewish holidays, such as Passover, the population would swell to as much as ten times this amount. This means that a tiny percentage of the Jews in Jerusalem were directly involved with or actually called for the crucifixion of Jesus. His death was surely engineered by the Jewish leaders in collusion with Pilate and his Roman cohort. As far as we know, the vast majority of Jews in Jerusalem were either horrified by or unaware of what was going on with Jesus.

I think it’s important for us to understand what really happened in the death of Jesus for a number of reasons, not the least of which is the sad history of anti-Semitism among Christians. For too long it was acceptable to utter the familiar refrain, “The Jews killed Christ.” And for too long many Christians used this as an excuse to persecute Jews who lived centuries after the death of Jesus, and who therefore had nothing to do with his death. In fact, some Jews were involved in the death of Jesus, mostly the leaders of Jerusalem. But Pontius Pilate alone had the authority to crucify Jesus. According to the Gospels, the majority of Jews who had any awareness of Jesus’ death were grieved, not glad. If we blame “the Jews” for the death of Christ, we’re making a mistake.

And, of course, we’re also missing the main point. Jesus did not die primarily as a helpless victim of Roman or Jewish injustice. He chose to die on the cross in faithfulness to the Father’s will and so as to bear the sin of the world. If anyone is to blame for the death of Jesus, we are, because we have sinned. Thus in looking upon Jesus’ death, we join the women of Jerusalem in weeping, not only for Jesus, but also for ourselves. In the death of Jesus we see what we deserve, and we rightly feel appalled.

Then the mystery of grace astounds us. We realize that Jesus is bearing our sin so that we might be forgiven, that he is dying in our place so that we might live in his place. We sense the wonder expressed in 2 Corinthians 5:21: “For our sake [God] made [Christ] to be sin who knew no sin, so that in him we might because the righteousness of God.” How amazing!

Gracious God, to whatever extent there are remnants of anti-Semitism in me, please forgive me and cleanse my mind and heart. Help me not to blame others for the death of Jesus, but to see my own sin as sending him to the cross. Even more, help me to grasp the mystery of your grace, to see in the death of Jesus that which gives me life. May my weeping over the suffering of Jesus, and my sorrow over my own sin, turn to joy when I recognize the majesty of Your mercy. Amen.

You can find the entire series of devotions (up to this point) here: The Stations of the Cross: A Devotional Guide for Lent and Holy Week.

April 17, 2011
The Stations of the Cross: A Devotional Guide for Lent and Holy Week - The Eighth Station
Next Post

That Pit You Dug For Yourself
Preventing Grace
Related posts from Mark D. Roberts 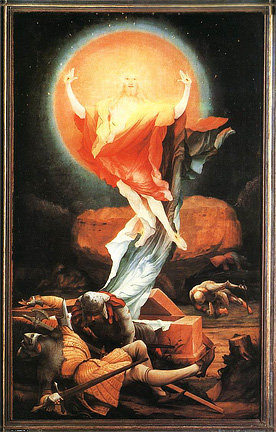