In my last post I began to explain why the Apostle Paul wrote to the Christians in Corinth, and why he used the image of the human body to help them understand who they were as God’s people together. The core problem was that of division in the Corinthian ekklesia, with members treating each other in an unloving manner and failing to value their connectedness in Christ. 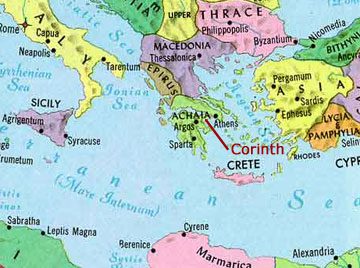 The more you learn about Corinthian culture in the first century A.D., the less you are surprised by the problems occurring among the Christians there. Corinth was located in southern Greece, in a prime location for travelers and merchants moving across the Mediterranean Sea. Thus Corinth was a hotbed of economic opportunity, unlike much of the rest of the Roman Empire. The city had lots of new money and all that often comes with it: pride, boasting, extravagance, prejudice, resentment, selfishness, sexual adventurism, etc.

Moreover, because of Corinth’s location and economic vitality, it was a truly multicultural city, with immigrants from throughout the Roman world. With multiculturalism came all sorts of adventures and challenges, including foreign religions, different languages, and conflicting cultural patterns. The religious life of Corinth was suitably varied, with vestiges of older Greek religion and its mysteries, as well as lots of newer cults brought by immigrants and visitors. Among those who brought their religion to Corinth were some Jews who had built a synagogue there. (If you’re looking for more information on the Corinthian culture and its impact on the Christians there, see the outstanding commentary by Ben Witherington, Conflict and Community in Corinth.)

Given what I’ve said about the diversity and unsettled nature of Corinthian society, it shouldn’t be surprising to learn that the Christian gatherings weren’t without their challenges. After all, if you were to bring together people from different socio-economic brackets, religious backgrounds, and ethnicities, and put them in close fellowship with each other, and supply only minimal leadership, then you would surely find yourself with a mess. And that’s what Paul experienced with the Corinthians.

Please understand that I’m not necessarily criticizing the Corinthian believers for this situation. After all, they were relatively immature Christians when Paul left their city to plant churches elsewhere. They didn’t have Bibles, since the New Testament wasn’t written yet, and they would have had at most very limited access to scrolls in the local Jewish synagogue. They didn’t have mature Christians to lead them (except perhaps for a few visiting missionaries, but these could be problematic). They didn’t have Christian books, tapes, CDs, DVDs, or websites. What they had was a memory of Paul’s teaching, some of which they misunderstood or found confusing, and the presence of the Holy Spirit.

I’m not minimizing the value of the Holy Spirit, mind you. Indeed, there is no better resource for Christian community that the third person of the Trinity! But the problem is that Christians, especially immature ones, can easily get confused about the Spirit. They can attribute to the Spirit works of the flesh, or even of demons. They can claim for themselves spiritual inspiration when none is truly to be found. And this is exactly what happened at Corinth.

In my next post in this series, I’ll say a bit more about the specifics of this Corinthian confusion about the Spirit, and how it relates both to their culture and to the divisions within the Corinthian ekklesia. Then we’ll be ready to dive into Paul’s teaching on the church of feet and ears.

November 11, 2011 When Is Inequality Okay? When Is It Not Okay?
Recent Comments
0 | Leave a Comment
Browse Our Archives
Related posts from Mark D. Roberts

Evangelical
A Film Festival and a Church, Together
Mark D. Roberts
TRENDING AT PATHEOS Evangelical