Pope Declares John and John Paul to Be Saints . . . God Declares You to Be a Saint

Today, Pope Francis did something exceptional, declaring two former popes to be saints. Now, Pope John XXIII is Saint John XXIII and Pope John Paul II is Saint John Paul II. This is making headlines, both because the canonization of any human being is notable and because pundits are trying to outdo each other in guessing at the political motivation for Pope Francis’ unusual recognition of the sainthood of two former popes at the same time, popes who are thought to represent different theological and political streams of the Roman Catholic church.

Even if you’re not a Roman Catholic, Pope Francis’ declaration of two new saints is big news. But, from a biblical point of view, there is even bigger news: God declares you to be a saint. That’s right, from the perspective of the New Testament, if you have received God’s grace through faith in Christ, then you are a saint.

We find this stunning truth in many of the letters of the Apostle Paul, perhaps no more strikingly than in 1 Corinthians. In his opening address to the letter recipients, Paul writes:

To the church of God that is in Corinth, to those sanctified in Christ Jesus, called to be saints together with all those who in every place call upon the name of our Lord Jesus Christ, both their Lord and ours (1 Cor 1:2).

In Greek, the word translated here as “saints” is hagios. This word comes from the same root as the verb hagiazo, which is used earlier in the sentence in the phrase “to those sanctified in Christ Jesus.” We might translate this verse as, “To the church of God that is in Corinth, to those declared to be saints in Christ Jesus, called to be saints together with all those who in every place call upon the name of our Lord Jesus Christ, both their Lord and ours.”

The basic meaning of the word hagios is “set apart, special, holy.” A person who is hagios is not ordinary, but is designated for some particular purpose. If we were speaking first-century Greek, we might use hagios to refer, for example, to Olympic athletes. During the games, they are literally set apart from the rest of us, sequestered in the Olympic village where we may not enter, in order to focus on the task set before them.

So, we learn from 1 Corinthians 1:2 that all Christians have been “declared saints in Christ Jesus.” Every person who acknowledges Jesus Christ as Lord has been “called to be a saint.” Once you say “yes” to Jesus Christ, then, in him, you are a saint. You have been set apart by God for relationship with him and for his purposes. You are special to God.

Of course, the use of the word “saint” in English no longer captures the sense of the biblical language. The Roman Catholic church is not alone in using “saint” for those who are exceptional in their Christian discipleship and impact. Even informally, when we say, “She’s a saint,” we mean that someone is unusually good, loving, long-suffering, or something like this. We don’t think of ordinary Christians as saints. And we certainly don’t call ourselves saints.

But, according to Scripture, sainthood is not something you earn. It is something given to you by God. It depends fully on God’s grace, not on your exceptional behavior. We see this most clearly in 1 Corinthians. Paul begins by declaring that the Corinthian Christians are saints, along with all other believers. Then, he spends the rest of the letter dealing with the exceptional sinfulness of the Corinthian congregation. In their attitudes and actions, the Corinthians are about as far from “saints” as people could be. But their sainthood has been conferred on them by God because of their response to the Gospel, not because of their exemplary behavior.

So, no matter the quality of your discipleship, if you have put your trust in Jesus Christ, then you are a saint. Your challenge, and my challenge, is not to live so that one day we might be declared saints. Rather, it is to live out our sainthood each day, in our personal lives and public lives, in our workplaces and our churches, among friends and strangers, in everything we do.

April 26, 2014
Microsoft VP Announces the End of the PC
Next Post

April 28, 2014 Debunking the 10,000 Hour Rule
Recent Comments
6 Comments | Leave a Comment
"Yep, it works. Was looking around to see if anyone knows WHY."
Rick Chance A Miraculous Cure for Bug Bite ..."
"Hi Pastor,I am hoping you will continue your discussion on how God guides us. Can ..."
BB How Does God Guide Us?
"Happy birthday USA you are 243 years old today. Like in a marriage, a lot ..."
Tom Krayg Astounding Freedom: A Reflection for Independence ..."
"Great article on Thanksgiving. More of us should be thankful to those who work hard. ..."
Rhonda Diane Lucas-Wright A Simple “Thank You” That Makes ..."
Browse Our Archives
get the latest from
Evangelical
Sign up for our newsletter
POPULAR AT PATHEOS Evangelical
1 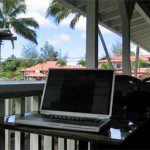 Evangelical
What is Your Church's Front Porch? Could It...
Mark D. Roberts
TRENDING AT PATHEOS Evangelical