As humorous and far-fetched as this scene may sound, when working in occult shops this is a commonly asked question but with roles reversed. “How exactly do you work with candles?” There are countless methods and ways to work with candles, but I wanted to share my process while omitting tradition-specific ideas, just boiling it down to the main mechanics that I use which I feel can be adopted and worked into any tradition or eclectic style of witchery. There is no universal right or wrong way to work with candles and I strongly encourage experimenting to find out what works best for you. Hopefully this will help those who are new to working with candles or those who want to try out new methods. Magick is an “art” as much as it is a “science”. Make the art of the working personal to your own spiritual practices.

I begin by placing my candle on a peyton (a ritual pentacle on the altar). I always cleanse my candles before working with them. I’ve noticed that a lot of witches don’t do this. But think of all the hands that have picked up and put down any candle while it’s in a shop. Think of all the places that it’s been since it’s creation to your own home. Along the way it’s bound to have picked up some energy that you may not want in your actual spell. When working magick of any sort, I try to look at it like I’m performing surgery, and as such want to ensure that I’m working in a sterile environment.

I then charge the candle with witch’s fire by tracing a pentagram in blue-white flame above it and then filling my hands with that flame and holding my hands around it. The pentagram may vary depending on what your desire for the working is and I use a non-traditional method of combining the directions of invoking and banishing pentagrams with circling it either clockwise or counterclockwise, as I’ve found that alters the energy of the pentagram as well. Once again I suggest experimenting and recording your results to find which methods work for you. After this I allow the blue-white witch fire to completely consume the candle before moving on to the next step.

I then take a candle/clay sculpting tool and drill three small holes into the top. Some people use screwdrivers for this. Whatever you use, it’s best to ensure that this tool is set aside specifically for this purpose and not used for mundane purposes. The reasoning for three holes are different from practitioner to practitioner that I’ve asked. For associations I’ve heard include:

Whatever your logic is behind the drilling of the three holes, ensure that you’re contemplating their association while drilling the holes. While drilling each hole, I imagine a beam of light coming from the heavens and focusing on each hole, sort of like a laser.

Next I will take an herbal blend that I’ve already prepared and using the wax carving tool will begin to stuff it into the holes that I’ve just drilled. Sometimes it will be harder than others, depending on what ingredients you’re using and how finely its chopped up. You want to remove any excess not in the holes as much as possible. You don’t want the candle itself to catch on fire, just the wick.

I will then take a conditioning oil and coat the candle with it. You can make your own conditioning/conjure oils or purchase them. This one I’m using is from the Mystic Dream. Since my goal is to bring something to me with this candle, I coat from the tips inward. If I were to be repelling, banishing, or cleansing I would work from the center out to the tips of the candle.

Finally, I place my hands to form a triangle of manifestation above the candle, uniting the three aspects I’ve incorporated with the candle’s holes and looking through the triangle space between my hands in an act of mentally uniting the three aspects to work as one. I then use the triangle to blur the energies of the holes that I’ve created, I think of it like stirring the ingredients of a cake to make it into a single batter. I then fill my hands with witch fire once more, this time being the color associated with the working that I’m doing. I have the witch fire burn through the candle with the focus of making the candle and all its separate parts into a singular energetic tool. It’s no longer a candle with different oils, herbs, etc. It’s now a candle for the working. 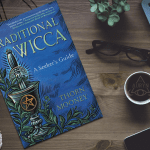 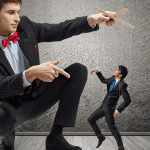 April 1, 2018 I'm Not Your Marionettist
Recent Comments
0 | Leave a Comment
"This makes me love jack-o-lanterns even more."
Anonymous Jack-O’-Lanterns and the Devil
Browse Our Archives
Related posts from For Puck's Sake