Salem & The Magick of Halloween Costumes

There is perhaps no other holiday so closely tied to wearing costumes as Samhain or Halloween. In Mickie Mueller’s Little Book of Halloween, she traces the tradition of costume wearing and trick-or-treating and how they were introduced by Pagans and kept alive despite the Christian Church’s transformation of Samhain into All Souls’ Day in an attempt to divert the people’s attention from pagan practices of honoring the deceased ancestors. She writes that:

“The tradition of Souling on All Souls’ Day eventually included guising or mumming, another earlier practice brought into the cities from the rural Pagan communities. Carrying their lanterns and gathering in the streets, costumed revelers performed short plays or other performances. In return, the residents offered food or money for their entertainment.”
– Mickie Mueller
Llewellyn’s Little Book of Halloween

Interestingly enough, she also writes about how Halloween wasn’t originally celebrated by the Puritans of Massachusetts, which makes a lot of sense, but that it was the Southern Colonies such as Virginia who brought it back to the United States, having larger Catholic, Episcopalian, and Anglican colonists. This is not the case today. October, and particularly Halloween is a huge event in Salem, Massachusetts – the setting of the Salem Witch Trials and what is referred to as Witch City, where even the police cars have the image of a flying witch on them. No, seriously, they do.

Salem today is of course home to many witches of various types. The most infamous is the legendary Laurie Cabot who opened the very first Witch Shop in the United States, 100% devoted to Witchcraft and nothing else (such as New Age, other occult practices, etc.) back in the 70’s, in Salem Massachusetts. In the Cabot Tradition of Witchcraft, she teaches us that Samhain is not just a magickal night when the veil is thinnest and we can connect the strongest with our ancestors and beloved deceased, but that since it’s the Witch’s New Year, it is also a magickal time that sets the tone of the year.

As such she writes in her Book of Shadows that:

“Because it is our new year, this is why we dress up, to use your majick to become what we want to be for the coming year. We invoke our future by wearing what we want to create for ourselves. We don’t dress in horrific costumes or any form of ugliness. We dress in the way we want our community to see us. We are casting a spell about who we are and what we are going to become in the new year. Most witches dress in their finery, wearing their jewelry and best magical clothing. Some people do it in a comical, fun way. They may dress in a suit if they want to have a lot of money and stick money coming out of their pockets. Another may dress in a beautiful butterfly costume to represent transformation into beauty.”
– Laurie Cabot
Laurie Cabot’s Book of Shadows

So keep this in mind when deciding what sort of costume you want to wear for Halloween or Samhain, because you’re invoking that energy to set the tone for the rest of the year. 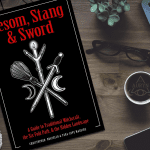 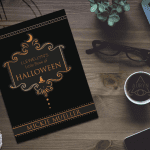 October 4, 2018 Review: Llewellyn's Little Book of Halloween
Recent Comments
0 | Leave a Comment
Browse Our Archives
get the latest updates from
For Puck's Sake
and the Patheos
Pagan
Channel
POPULAR AT PATHEOS Pagan
1

Hoodoo How We Do: Underwear Spells
Voodoo Universe
Related posts from For Puck's Sake