I had the pleasure recently of appearing on Joanna DeVoe’s Hippie Witch Radio. Joanna’s positivity is completely infectious, in the best way possible. We discussed many things throughout the program, but something that I thought was interesting was that I shared something I really haven’t publicly. She asked me when my psychic experiences started happening, so I shared a story about when I believe my psychic ability began occurring in childhood, which was directly related to a traumatic event. I blame my openness on how comfortable she made me feel during the interview.

This actually doesn’t tend to be that uncommon. Many shamanic and indigenous magickal traditions will have a person go through a traumatic event for initiation. Sometimes this is through fasting, pushing the body and mind to an extreme. Sometimes this is done with the use of entheogenic substances, most often it’s not. I’ve seen anthropologists refer to this as “shamanic death.” It’s also not uncommon for Buddhist and sometimes magickal traditions to perform something similar in an act sometimes referred to as “ego death.” Aleister Crowley referred to this as the “Night of Pan“, while Carl Jung referred to this as “psychic death.” Even literally, many people who have near-death experiences, often report having a psychic opening or a new sense of spiritual connection with life – sometimes through their previous religious lens, and sometimes contradicting it.

“O! the heart of N.O.X. the Night of Pan.
PAN: Duality: Energy: Death.
Death: Begetting: the supporters of O!
To beget is to die; to die is to beget.
Cast the Seed into the Field of Night.
Life and Death are two names of A.
Kill thyself.
Neither of these alone is enough.”

– Aleister Crowley
The Book of Lies

An interesting series of studies showed that people who had traumatic experiences in childhood were often more likely to claim mediumship abilities. The study showed that these people were more likely to have dissociative states (which is a spectrum) but that there was no correlation between these people and dissociative states that are viewed as pathological on the dissociative spectrum. The study concludes that “‘contact with the dead’ is not necessarily indicative of pathology.”

Don’t worry though. You don’t need to induce your own trauma, have a near-death-experience to awaken your psychic abilities or control them. That’s why I wrote a book on how to do it effectively and safely from a magickal point of view. To listen to me discussing this experience and a lot of other topics revolving around both witchcraft and psychic ability, check out the interview on Hippie Witch Radio below: 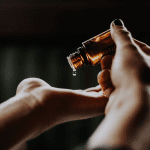 August 2, 2019
I Believe In 'Woo-Woo' Healing and Science
Next Post 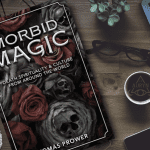 August 4, 2019 Review: Morbid Magic
Recent Comments
0 | Leave a Comment
"This makes me love jack-o-lanterns even more."
Anonymous Jack-O’-Lanterns and the Devil
Browse Our Archives
get the latest from
For Puck's Sake
Sign up for our newsletter
POPULAR AT PATHEOS Pagan
1