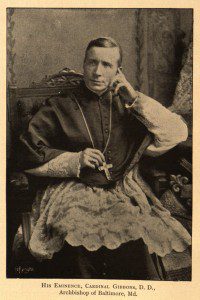 James Gibbons was born in the cathedral parish, Baltimore, and baptized in that venerable church by the Rev. Charles I. “White. He was taken to Ireland at the age of ten, and made his earliest studies there, attracting the attention of Archbishop McHale by his piety and diligence. Returning to his native country, be entered the preparatory seminary, St. Charles’ College, and after his course there entered St. Mary’s College, Baltimore. He was ordained in March, 1861, and assigned to St. Patrick’s Church, but in a few months received charge of St. Bridget’s Church, Canton, with the care of St. Lawrence’s at Locust Point, as well as of the Catholic soldiers at Fort McHenry.

The zeal of the young priest in this laborious duty showed his merit, and Archbishop Spalding made him his secretary and assistant at the cathedral. The peculiar charm of his manner, the influence his piety exercised, made him a marked man, and at the Second Plenary Council of Baltimore he was selected as the priest best fitted to organize the new vicariate-apostolic in North Carolina, a State where Catholicity had made least impression. He did not shrink from the difficult task. Everything was to be created; the scattered Catholics were fewer in the whole State than would be found in a Maryland parish. He was consecrated Bishop in the cathedral of Baltimore, August 16, 1868, and proceeded to Wilmington, North Carolina, making St. Thomas’ Church his residence.

He found one or two priests in the State, and seven hundred Catholics scattered in a population of a million. He drew devoted priests to him, and labored in person with the gentle zeal of a St. Francis of Sales, winning a way to hearts that the profoundest erudition, or the highest eloquence failed to reach. He visited every part of the State, preaching and lecturing in court-houses, meeting-houses, any hall that could be had, and everywhere presenting the unknown truth with irresistible power. His method can be best understood by his wonderful little book, “The Faith of our Fathers,” a work that has been more effective than any other since Milner published his ” End of Controversy.” Little communities of converts began to form, and the ministers of God began to feel courage. Churches sprang up in the larger cities, the Sisters of Mercy came to open an academy, and the ancient order of St. Benedict prepared to found a monastery.

On the death of Bishop McGill, Doctor Gibbons was transferred to the see of Richmond, July 30, 1872, retaining, however, the charge of his vicariate. His labors in the larger field were even more fruitful, and the influence was gradually extending, when Archbishop Bayley, finding his health precarious, asked that he should be appointed coadjutor of Baltimore. On the 29th of May, 1»77, he was made Bishop of Janopolis and proceeded to Maryland. He left with reluctance the flocks in Virginia and North Carolina to assume the charge of the ancient diocese of Baltimore, of which he became archbishop on the death of A1chbishop Bayley in the following October. The pallium was conferred upon him on the 10th of February, 1878.

His venerable mother, who had lived to see her son enthroned in the cathedral where he had been baptized, died soon after at the age of eighty. Raised thus to the highest position in the American hierarchy, he enjoys the respect of all, and was chosen by Pope Leo XIII. to preside in the Third Plenary Council of Baltimore in November, 1884, having been invited to Rome with other archbishops and bishops in the previous year in order to deliberate on the most urgent matters to be considered in that assembly.

In the Consistory held by Pope Leo XIII. in June, 1886, the Archbishop of Baltimore was created a cardinal priest, and the insignia of his new dignity were soon after borne to him across the Atlantic.

John Gilmary Shea, The Hierarchy of the Catholic Church in the United States (New York: The Office of Catholic Publications, 1886), 82-84.