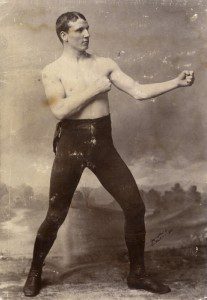 Born John Edward Kelly in County Kildare, Ireland, he was known in boxing circles as “Nonpareil Jack Demsey” because of his reputation as being unbeatable in the ring. In his first 65 matches, he lost only three times. He reigned as World Middleweight Champion from July 30, 1884, to January 14, 1891. He lost to Bob Fitzsimmons in the thirteenth round at New Orleans’ Olympia Club. Dempsey lost a battle to tuberculosis on November 1, 1895. Dempsey was buried in an unmarked grave in Mount Calvary, a Catholic cemetery in West Hills, Portland, Oregon. In 1954, he was inducted into Ring Boxing Hall of Fame, and in 1992 into the international Boxing Hall of Fame.