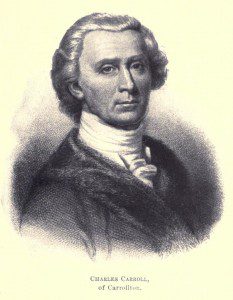 With the Fourth of July, McNamara’s Blog launches a new feature, “Catholics in Public Service.” It seems best to begin with the first major American Catholic to engage in public service, Charles Carroll of Carrollton, the sole Catholic signatory of the Declaration of Independence (and the last to die). The following is taken from the 1911 Catholic Encyclopedia and has been edited in the interest of blogging brevity.

His grandfather, Charles Carroll, emigrated from England to Maryland because of the persecution of Catholics, 1 October 1688. He obtained considerable grants of land and was made attorney-general under the third Lord Baltimore. The year he arrived in America, Lord Baltimore was deprived of his rights, and Maryland was made a royal province. As Carroll was in favour with the Baltimores, he enjoyed important political positions in the colony before and after the restoration of their rights in 1715.

His father was Charles Carroll of Annapolis (1703-1783), a wealthy landowner. His mother was Elizabeth Brooke. At ten, Charles Carroll studied with the Jesuits at Bohemia, Maryland, along with his cousin John Carroll, future Archbishop of Baltimore. In 1748, they transferred to the Jesuit college at St-Omer in French Flanders, where Charles remained six years. After a year at the college of the Jesuits at Reims, Charles entered the College Louis le Grand at Paris. In 1753 Carroll went to Bourges to study civil law. He remained there for a year and then returned to Paris until 1757. In this year he took apartments in the Temple, London, where he studied law for several years.

In the difficulties with the mother country regarding taxation without representation, Carroll aggressively defended the position taken by the colonies. While jurist Daniel Dulaney defended the government’s position in a series of articles in the Maryland Gazette under the signature “Antillo,” Carroll argued that taxes should not be levied upon the people except by the consent of their representatives. He wrote four articles and the popular sentiment was decidedly with him. This controversy established Carroll’s reputation as a debater and a scholar.

In 1774, Carroll was elected with six others by the citizens of Anne Arundel County and of Annapolis, with full power to represent them in the provincial convention. Catholics had been disfranchised and declared ineligible to a seat in the Assembly, but by this act the prejudice against them was swept away. In December 1774, he was named a member of a Provincial Committee of Correspondence. He was a member of the Maryland Convention of 1775 which adopted the “Association of the Freemen of Maryland” which became the charter of the colony until the adoption of the Maryland constitution in 1776.

In February, 1776, the Continental congress appointed Carroll one of a committee of three to visit Canada to secure the alliance of the Canadians in the struggle for independence. Franklin and Samuel Chase were the other members of the committee, and Father John, afterwards Archbishop, Carroll accompanied them. The committee was clothed with almost absolute power over military affairs in that country, and their failure to accomplish their object was not due either to their want of zeal or lack of ability.

That same year Carroll was elected a delegate to the Continental Congress. Of all the signers of the Declaration of Independence he risked the most. He was the wealthiest man in the colonies at the beginning of the Revolution, his wealth being estimated at $2,000,000.

Later Carroll was appointed one of two delegates from Annapolis to the Colonial Convention which was to adopt a constitution for Maryland. In 1778, Carroll resigned his seat in Congress and returned to Maryland to become a member of its senate. He was re-elected to Congress in 1780, but promptly resigned from his seat. In 1783, he was elected president of the Maryland Senate. Carroll was in the Maryland Senate from 1787 to 1789, when the constitution was adopted, and became a leader of the Federalists. He was elected to the U. S. Senate from Maryland in 1789.

In 1792, when Congress passed a law making it illegal to hold office in Congress and in a State legislature, Carroll resigned his seat in the U.S. Senate to retain his place in the Maryland Senate, serving until 1801. His last public act was the laying of the corner-stone of the Baltimore and Ohio railroad on July 4, 1828. After the death of Adams and Jefferson on the 4th of July, 1826, he was the only surviving Signer of the Declaration of Independence.

July 3, 2014
Know-Nothings Appeal to Protestant Women of America, 1856
Next Post

Catholics: They Are Not Coming Back...Unless...
Thin Places
Related posts from McNamara's Blog